‘In Sprinkles We Trust,’ one slogan suggests with levity, months before the presidential election
READ THIS NEXT
Hertz strikes major deal with Tesla that includes Tom Brady ads

Chocolate frosted with sprinkles, one of six Dunkin' canDOUGHdates.

Dunkin’ is getting into the electoral spirit more than five months ahead of the U.S. presidential election with a campaign that turns selecting a favorite donut into a bit of a patriotic play.

Dunkin’ is celebrating National Donut Day by introducing the six candidates in the Donut Party.

“This year, for obvious reasons, we thought it would be fun to play into the election,” says Drayton Martin, VP of brand stewardship at Dunkin’.

While brands may still be debating whether to play on political themes as the Nov. 3 general election looms, Dunkin’ is out with its election-themed campaign, which will only run through early June.

Meanwhile, there is some more consequential voting set to occur, with primaries scheduled for June 2 in Indiana, Iowa, Maryland, Montana, New Mexico, Pennsylvania, Rhode Island, South Dakota and the District of Columbia.

Dunkin’s effort, to be clear, is separate from any of the campaigning taking place in those races. Still, there are clear nods at real political races, including a 15-second spot that spoofs candidate debates. The two candidates—or as Dunkin’ calls them, canDOUGHdates—with speaking roles in the spot are chocolate frosted with sprinkles and glazed, who are two of the three female candidate characters.

Dunkin’ insists it isn’t getting political. “We don’t pick sides, we’re on your side,” says Martin.

The idea was in the works before the coronavirus pandemic halted activity across the country and led Dunkin’ to shut down the dining areas in its shops, while still taking drive-thru, carryout and delivery orders. Although the push does not mention COVID-19, it comes after donut and coffee giveaways and other actions taken by franchisees nationwide. The campaign leans more into the idea of America deserving a sweet treat than it did before the pandemic, Martin says. “We also want to recognize the times,” she says. “We’ve all been through something and we continue to go through it.”

For those who don’t have it marked on a calendar, National Donut Day is the first Friday of June, which this year falls on June 5. It was established by the Salvation Army in Chicago in 1938 as a way to honor women who served donuts to soldiers during World War I. More recently, it has become a day for Dunkin’ and other chains to promote their products and do some giveaways.

While Dunkin’ dropped “Donuts” from its name more than a year ago, it continues to be the top seller of donuts in the country. Now, it wants fans to vote for their favorite among six classics: Boston Kreme, chocolate frosted with sprinkles, glazed, glazed chocolate, jelly and old fashioned.

Martin wouldn't divulge her favorite candidate. “I believe in confidential voting,” she says, though she said she is “definitely not voting for jelly.”

Still, she and her team did emphasize some of the characters over others. After seeing a concept piece that featured two male donuts and one female donut, they suggested featuring two females and one male, Martin recalled.

Each of the six donuts already has a campaign slogan. And Dunkin’ wants fans to make up their own lines, luring them with six chances to win free donuts for a year.

As it has done in past years, Dunkin’ is offering a free donut when a drink is purchased on National Donut Day. It is also adding a delivery deal for the weekend, a free half-dozen donuts on Grubhub orders of $10 or more on June 6 and June 7.

The “Dunkin’ Debates” spot is set to air during “America’s Got Talent” and on digital streaming platforms. Dunkin’s other marketing plans include GIPHY stickers, Instagram polls, in-store signage and Zoom backgrounds. 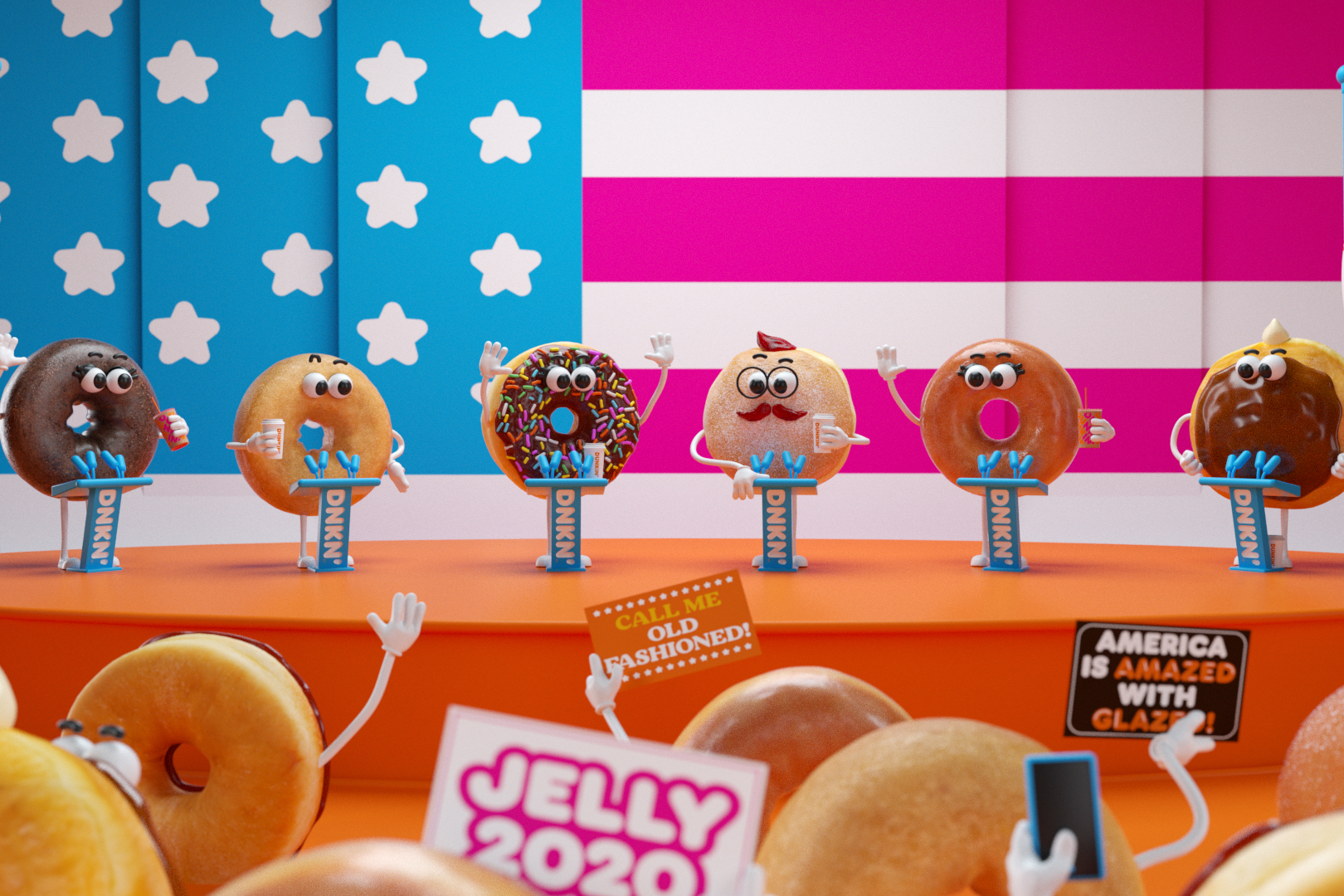 The 'Dunkin’ Debates' spot is set to air during 'America’s Got Talent' and on digital streaming platforms.