Going for the Gold: Here's The First New Hershey Bar in 22 Years 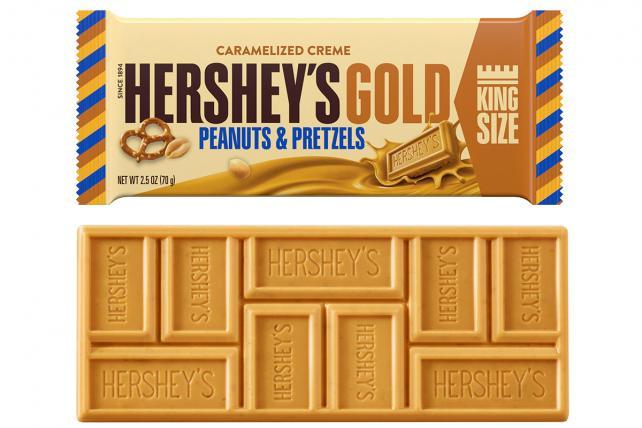 Solid gold, baby! After more than 18 months of development and testing, Hershey Co. is releasing Hershey's Gold, its first new bar under the Hershey banner in more than two decades.

While the bar has already been shown at events including a New York exclusive tasting and October's National Association of Convenience Store trade show in Chicago, Hershey set the official debut date for Nov. 1 to coincide with the 100 days out from the opening ceremonies of the Winter Games. Gold, Olympics, get it?

The 2018 Winter Olympics in Pyeongchang, South Korea, will be Hershey's second as an official sponsor of the United States Olympic Committee. Hershey plans to send a tweet with a link to a Hershey's Gold coupon each time Team USA wins a gold medal during the Winter Games.

In October, Hershey hosted an intimate taste test at a kitchen in downtown Manhattan for media to make and sample the new product. During the session, Jim St.John, senior R&D fellow and a Hershey veteran of 15 years, noted that the candymaker tried several iterations before getting the right salty-meets-sweet combination of caramelized creme encasing peanuts and pretzels. The resulting "golden" concoction, which doesn't contain chocolate, is smoother and less crunchy than existing chocolate bars but not without texture, a key component in ensnaring younger demographics, St.John said.

"Consumers are pushing us to add more textural complexity," he said, adding that Gold tested particularly well with millennials.

Hershey's Gold is the first new bar under the Hershey banner since Cookies & Cream was released in 1995. And the mix of sweet and salty plays to people's desire for treats that go beyond traditional candy bars.

"The company hopes to remain the biggest player in candy as consumers increasingly trade sugar and dairy for protein and salt," RBC analyst David Palmer said in a research note. He's planning to closely monitor sales of Hershey's Gold, a new Hershey Cookie Layer Crunch triple-chocolate flavor and the company's chocolate mixes with popcorn and pretzels, but said that the products are unlikely to "pack the punch" of last year's Cookie Layer Crunch introduction.

Hershey continues to bring out other new bar products, including Reese's Outrageous, a bar with caramel, Reese's Pieces, and peanut butter covered in milk chocolate that was sampled at a Halloween event in Michigan over the weekend but won't be in stores until May.