Starbucks plays it safe with this year's holiday cups 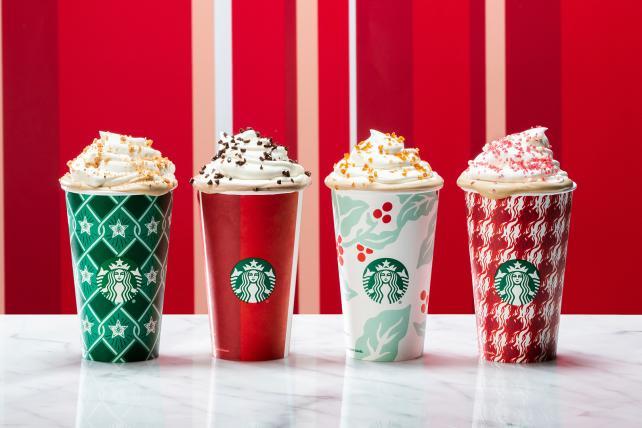 With October over, Starbucks has decreed it's almost time to put down that Pumpkin Spice Latte and pick up a holiday drink in an appropriately seasonal cup. This year the chain is playing it safe with designs that are unlikely to spur the kind of backlash elicited by some of its previous more polarizing packaging plays.

Four disposable cups have a somewhat retro flair the chain says are inspired by the company's coffee heritage and the season. There's also an environmental push. People who order one six holiday beverages on Nov. 2 get a free reusable red holiday cup.

Each year, Starbucks and other chains come out with festive winter designs for their packaging and introduce holiday products, like Starbucks' Christmas Blend coffee. Given its dominance, the cups from Starbucks get the most attention, including some complaints.

In 2015, for example, critics suggested red ombre cups were not Christmas-y enough. The 2017 effort stirred up minor controversy as well. Some groups applauded what appeared to be a cartoon lesbian couple leaning in for a kiss in a commercial and a couple holding hands on the cup itself. Others said they were turned off by what they perceived to be pro-gay rights imagery.

With this year's plan, Starbucks is playing it safe. The four disposable cups include one that's largely red with stripes, one with a green and white "Stargyle" design, one with a red and white houndstooth look and one with holly and berries.

A spot kicking off the seasonal push shows a woman getting two Peppermint Mochas to go. She sips one on a jolly walk in which she apparently is so warmed by her beverage that she can strut down the festive city streets with her coat slung over her shoulders and no hat or gloves, even as snow falls around her.

Starbucks worked with 72andSunny on the "Sip a Cup of Magic" commercials. Digital and social advertising comes from Big Spaceship, and print and out-of-home ads were down by the Starbucks in-house creative studio. Starbucks says it plans to highlight some of its employees in the campaign, such as sibling baristas who have a band, as well as a mom who works with her teenage daughters. 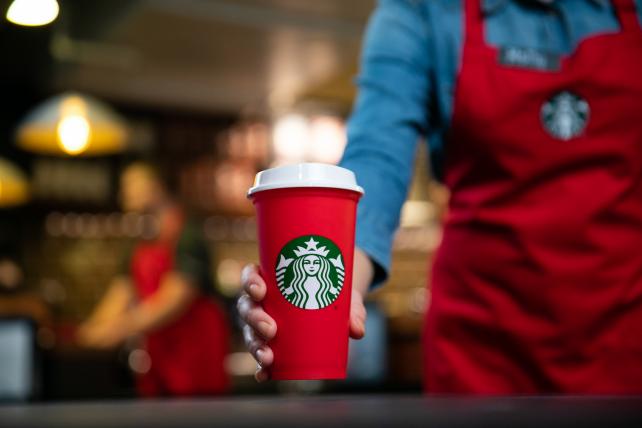 People with the reusable red cups can get 50 cents off grande holiday drink purchases after 2 p.m. Nov. 3 through Jan. 7 when they bring in those cups, a somewhat sly way for Starbucks to try to boost its business in the afternoon and evening.

Sales at Starbucks' longstanding U.S. locations rose just 1 percent in the fiscal third quarter, which ended July 1. One reason for the sluggish growth was softness in the afternoons, particularly starting at 2 p.m., CEO Kevin Johnson said on a conference call in July. Starbucks has been trying to address that weakness this year by running ads that emphasize its shops as an afternoon destination.

Analysts have predicted stronger growth for the fourth quarter. Starbucks is set to announce those results Thursday afternoon.