Holiday season fans, rejoice: Colorful cups are back at Starbucks and Dunkin'

Eagle-eyed coffee drinkers can spot the Starbucks wordmark and siren logo hidden in this year's holiday designs
READ THIS NEXT
Black consumers are group most swayed by brand values and diversity practices, study finds 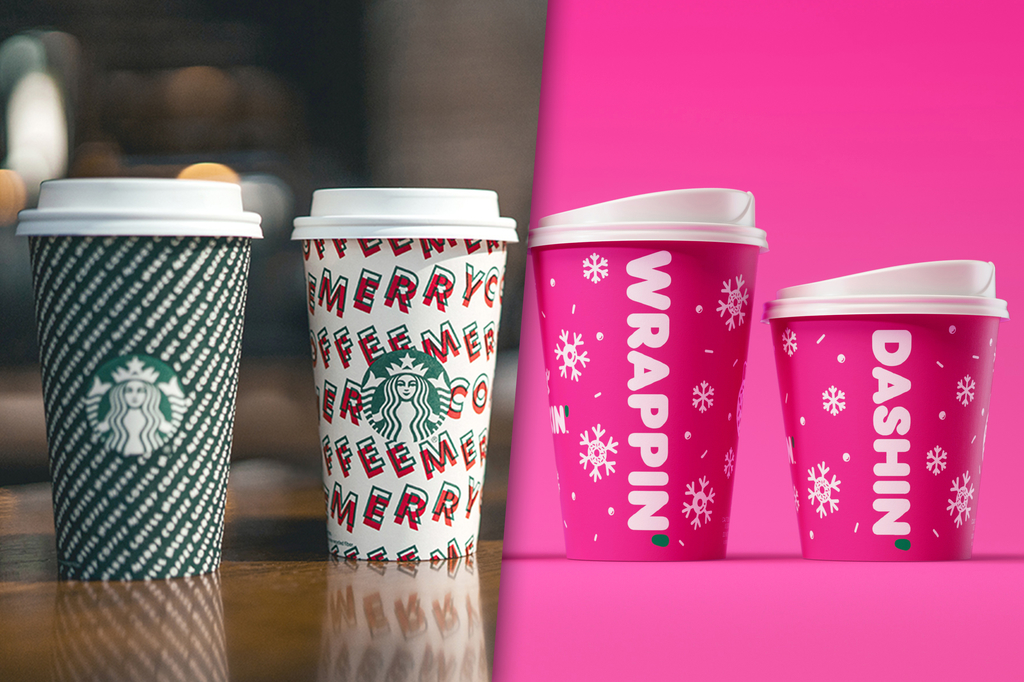 Ok, that’s not how the song goes. But as any coffee fan knows, early November means it is time to slurp sweetened drinks from festive paper vessels.

“For us, it both captured the sentiment of the season as well as reinforcing what people come to Starbucks for, which is coffee,” says Starbucks Creative Director Ben Nelson.

At Starbucks, which has released holiday cups to much fanfare (and occasional blowback) since 1997, the seasonal takeover begins Thursday in the U.S. and Canada after already hitting some other countries. 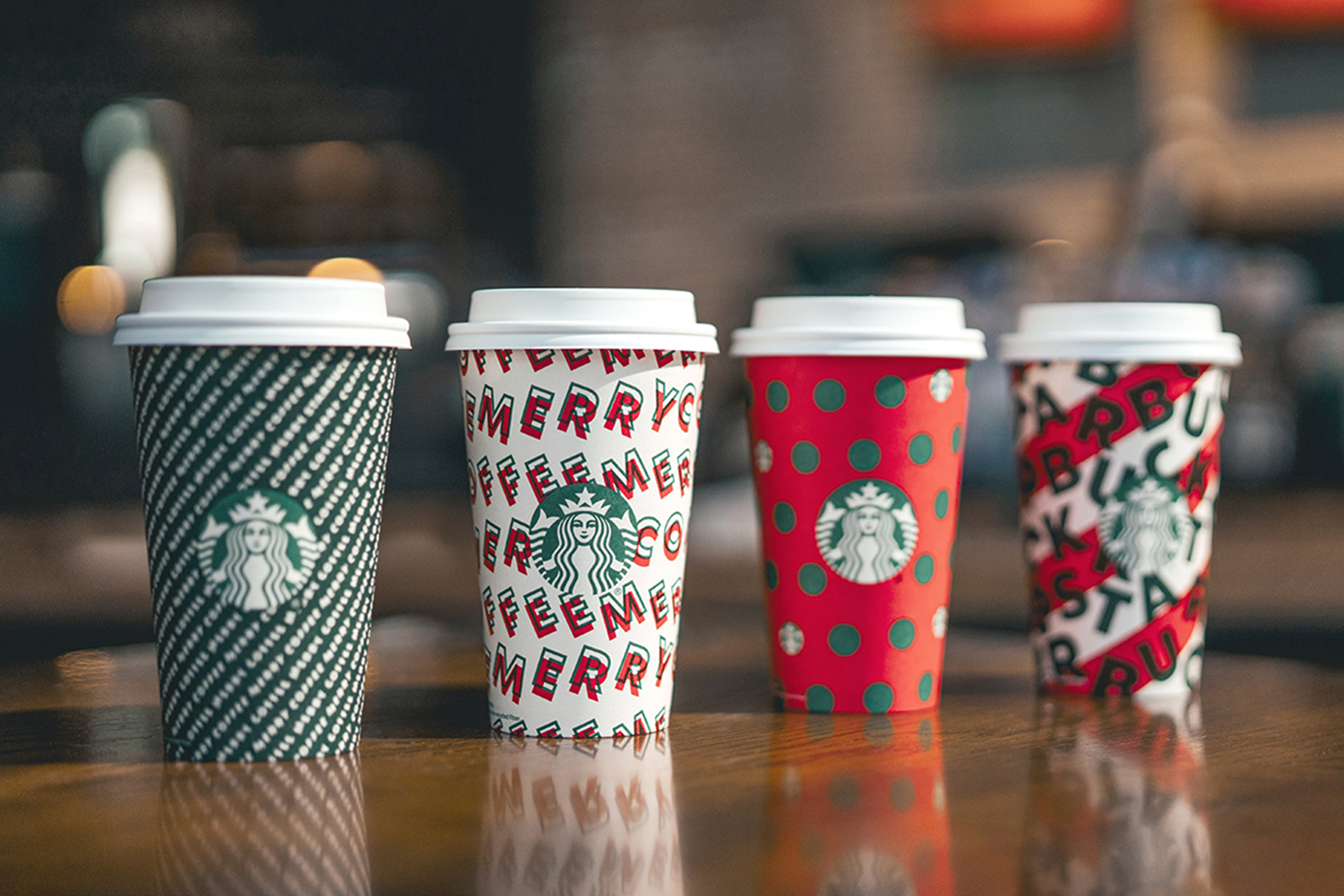 At first glance, the cups—narrowed down from 50 designs—don’t appear to suggest anything remotely controversial. In the past, Starbucks holiday designs drew negative reactions from a few for being possibly pro-gay rights (2017) and for having an ombré design some felt was not Christmas-y enough (2015). Time will tell how the internet reacts this year. Last year's four cups didn't appear to kick up much snow.

Smaller rival Dunkin’ has been serving (or, rather, servin’) beverages in its holiday cups for a few days already. Dunkin’s holiday theme this year is pink with white snowflakes. Each cup has a winter word on it—celebratin’, sleighin’, wrappin’, dashin’, and so on—in white lettering in the chain’s frankfurter font, with a green apostrophe at the end. 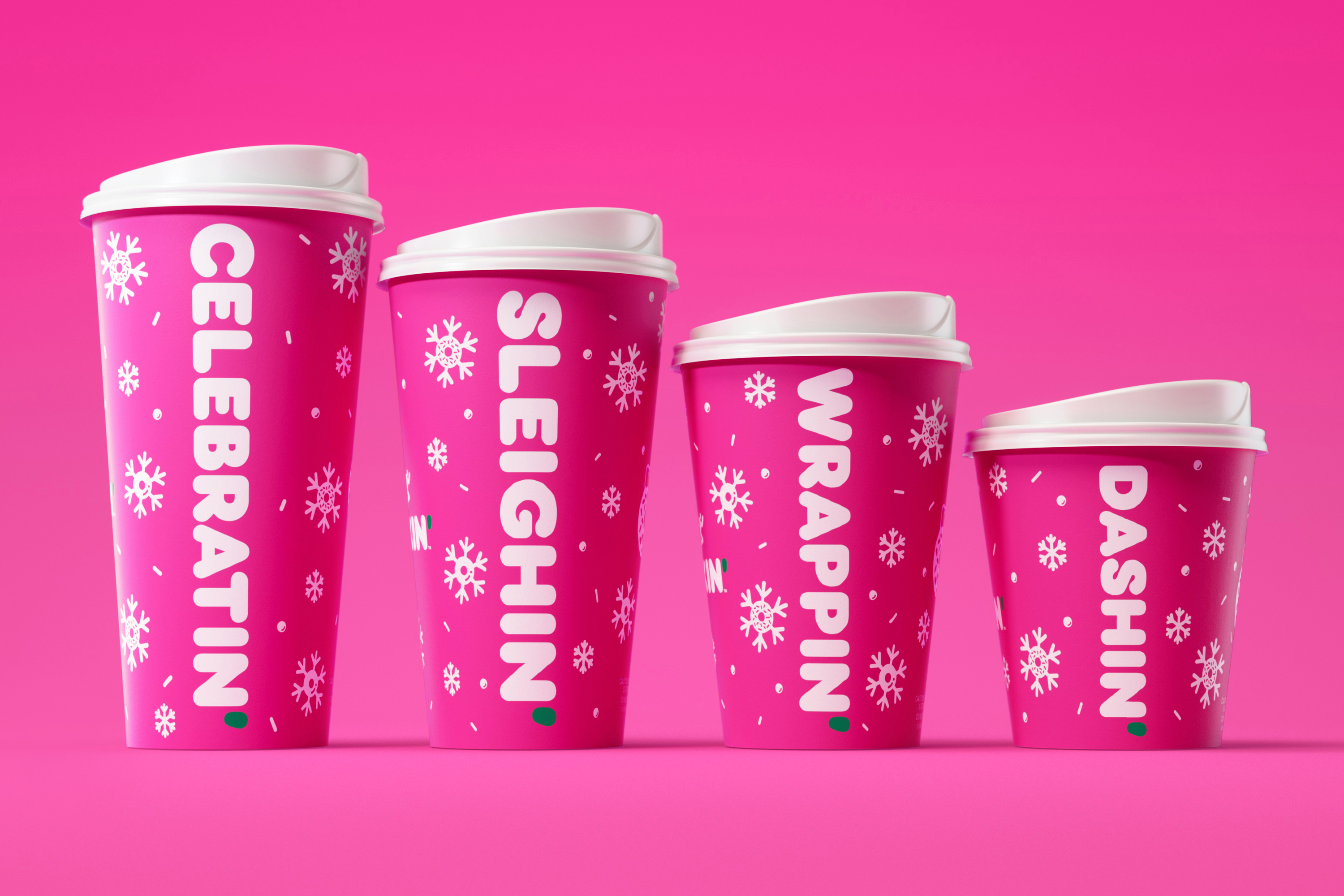 The Starbucks designs appear in the leading coffee chain’s signature shades of green with plenty of holiday red and pops of white. Starbucks has included its siren logo among the polka dots on one of the paper cups and hid the Starbucks wordmark in a repeating refrain of “merry coffee” on the green cup. The collection, complete with print ads that mimic fashion spreads, continues the bolder creative expression Starbucks began using earlier this year.

The holiday beverage battle is already heating up on social media. Dunkin’s peppermint mocha flavor is back after not being on the winter 2018 menu, and customers who downloaded the mobile app could buy the drink on Nov. 5, a day earlier than the advertised Nov. 6 launch. Dunkin’ also snagged the “peppermint mocha” Twitter handle and Instagram page to promote the beverage. Almost as soon as Dunkin’ began tweeting from @peppermintmocha.

Starbucks’ returning winter products include beverages such as peppermint mocha, toasted white chocolate mocha, caramel brûlée latte, chestnut praline latte and eggnog latte. And like last year, it is giving away a reusable red holiday cup to customers who order a holiday beverage on Nov. 7, while supplies last, and offering 50-cent discounts on certain drinks to those who reuse that cup after 2 p.m. through Jan. 7.

The majority of Starbucks’ campaign work was done by its in-house creative team, with film production handled by The Mill.

“Knowing that we’ve only got seconds to really capture our audience we just really wanted to create this magical," Nelson says of the videos. "We call it the ‘merry coffee universe.'"

~ ~ ~
CORRECTION: An earlier version of this article stated that Starbucks had launched a Twitter account with the handle @SBuxMintMocha, but Ad Age has learned it is not an official Starbucks account and appears to be run by a third-party user.