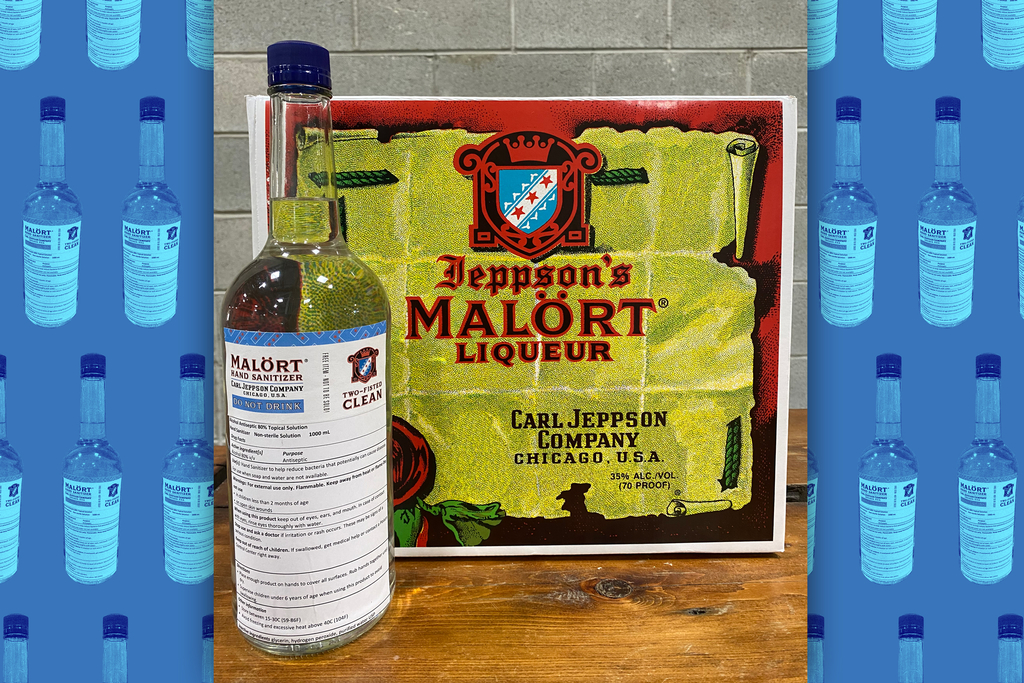 Scores of breweries and distilleries have pledged to make hand sanitizer in addition to beer and booze in response to the shortage of mainstay brands like Purell caused by the coronavirus outbreak. But no alcohol brand got the same kind of reception that Jeppson’s Malört did when it confirmed it also was getting involved in the goodwill effort.

“Malört already tastes like hand sanitizer, so this makes perfect sense,” says Dan Janes, director of marketing for Malört owner Chicago-based CH Distillery, jokingly summarizing some of the initial feedback. “People are poking a little fun at it, but most are just very appreciative that we are able to contribute something.”

Malört is as Chicago as the Bears, Cubs and ketchup-less hotdogs, celebrated for the fact that it tastes, well, terrible. “Like pencil shavings and heartbreak,” is how comedian John Hodgman once described it, according to a Chicago Magazine roundup of colorful descriptions of the booze. Locals know that a “Chicago handshake” amounts to a shot of Malört and a glass of Old Style beer—hangover included. First made in medieval times, malört is a schnapps made from wormwood, a bitter herb. Jeppson’s Malört is named for Swedish immigrant Carl Jeppson, who brought the drink to America in the early 1900s. It became popular in Chicago’s Swedish bars, later spreading to the city’s sizable Polish community, according to the brand’s website. CH Distillery has controlled the brand since acquiring it in 2018.

Truth be told, CH Distillery’s sanitizer is not actually made from Malört. Rather, the distillery followed emergency guidelines put out in March by the U.S. Food and Drug Administration for companies that want to assist in the effort. The rules call for a mixture of alcohol, glycerol, hydrogen peroxide and sterile distilled water or boiled cold water—with a strict mandate that companies not add other ingredients.

CH Distillery uses 190-proof alcohol, but had to externally source some of the ingredients. It mixes the concoction in a 1,000-liter stainless steel tank that it also uses to make its booze, including Malört. “A distillery like ours is a good candidate for producing alcohol-based sanitizer because our equipment can handle processing high-proof alcohol—essentially explosion-proof equipment,” the distillery notes in its guidelines shared with Ad Age. It packages the sanitizer in the same 1-liter glass bottles it uses for its booze.

The distillery—which also makes CH-branded vodka, gin, rum and bourbon—slapped the Malört name on the sanitizer to have a little fun. It won’t be made available to the general public. Instead the distillery will donate bottles to hospitals, hospice facilities, retirement homes and other healthcare providers. The organizations must transfer it into pumps or other suitable dispensaries. The branding is meant to bring some “lightheartedness into these environments that are high-stress environments,” Janes says. “That is why we ran with Malört, because that is what a lot of people know us for.”

But CH Distillery is serious about trying to help. The first batch of 500 liters was recently completed and will be made available for recipients by April 6.

“We’ve received hundreds of official requests and inquiries,” Janes says. “Really, we are honored that we’ve been able to take a new direction in terms of what we are producing.” But “it’s been a little bit overwhelming in terms of seeing where the demand is and knowing we are only going to be able to supply a fraction of the requests that we have received.” He adds, “it’s too bad that just in total, as a country, we are just that short, even in the Chicago area alone.”

The sanitizer production has not entirely halted normal production runs of Malört and the distillery’s other brands. Because of the state of Illinois’ stay-at-home order, the distillery had to shutter its tasting room in Chicago’s West Loop, which normally serves cocktails, shots and a selection of bar food. But fans can still make online orders and do curbside pickup, including for a bottle of Malört.

On social media, Malört has begun promoting “#MalörtOClock,” a designated period beginning at 9 p.m. CT for homebound fans to imbibe.

Y'all. My 9pm #malörtoclock calls have been the best thing ever. I connect with friends in MO, WA, OR, TX, MD, IL, NM, GA, and even more. Everyday. We are Healthcare workers, Bartenders, infosec/hackers, parents, friends, and more. Join us. 9pm cst. pic.twitter.com/N78vPj3Oqq

Janes says brand loyalists started the movement and Malört just jumped aboard, which he says is typically how things go: “Malört as a brand we don’t feel that we necessarily ‘own it’ ... it is really a brand that is owned by the people that enjoy it.”

“Enjoy” is, of course, up to interpretation  when it comes to Malört.