Just Inc. gets cracking on its push for egg substitute Just Egg 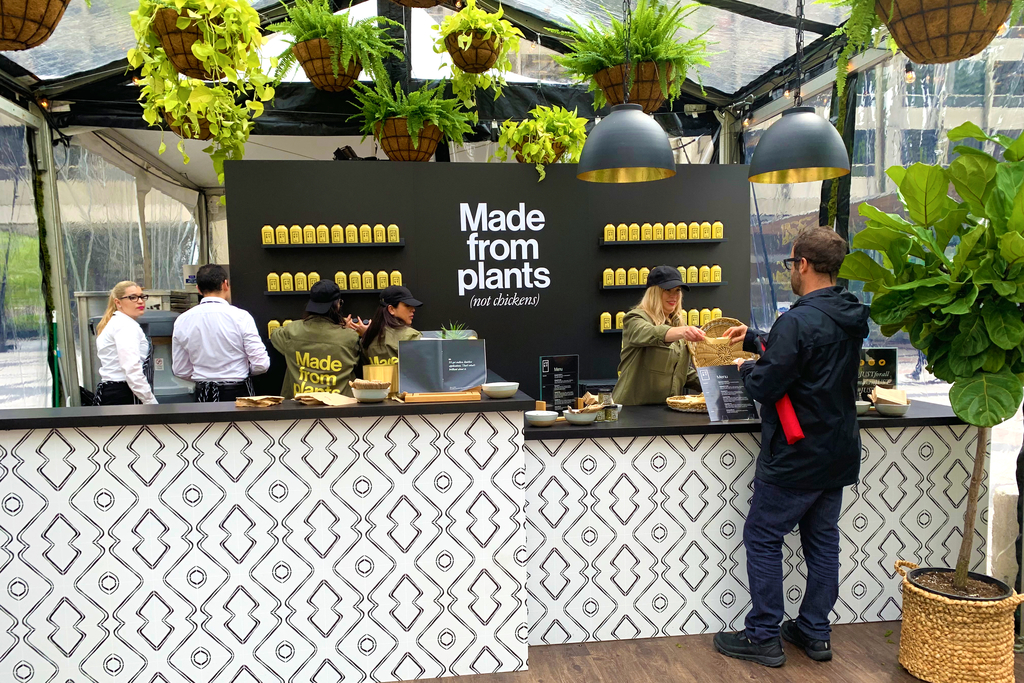 Just Inc. is eager to get people to try its eggless Just Egg product, hosting a series of pop-up events just as interest in plant-based foods heats up.

This week, the company set up a greenery-filled pop-up cooking station in Chicago, where for three days passersby could try a spring scramble, chilaquiles, focaccia, fried rice, tostada and frittatas with Just Egg, which is made with mung bean protein isolate.

The Chicago event came after one in Los Angeles and will be followed by multi-day pushes in New York and San Francisco. It's the biggest sampling effort to date from Just Inc., which began as Hampton Creek with its Just Mayo product a few years ago.

Just Egg isn’t going to fool any egg aficionados that they’re eating the real thing. The taste and texture are not exact replicas of what one would get from cooking a real egg. But the mung bean-based egg substitute seems to hold up well enough in dishes with other ingredients and might be an option for diners looking for alternatives.

Just Egg—not to be confused with breakfast prep meal kit Just Crack an Egg, an egg-related Kraft Heinz product that hit the market in 2018—hopes to crack into more of the restaurant business. Veggie Grill, Bareburger and Silver Diner have included Just Egg on their menus, and Just Inc. says it's having conversations with a number of other restaurants, including bigger quick-service players, but declined to name them. While such talks would have sounded unlikely to go further a couple of years ago, restaurants are eager to boost both their breakfast sales and their appeal to diners searching for alternatives to animal-based products.

Since its debut in stores and restaurants in 2018, Just Inc. says Just Egg has already sold the equivalent of 6.3 million chicken eggs. In terms of nutrition, a serving of Just Egg, at 70 calories and 5 grams of protein, is in line with a large egg, which contains 70 calories and 6 grams of protein (Just Egg’s patty, which for now is only in foodservice accounts such as restaurants, has more protein per serving).

For now, Just Inc. will tout the product largely on its own with events. Along with the city pop-ups, it ran breakfast taco bars at this year's SXSW Festival. Influencers are also touting the product in social media posts.

Just Inc. realizes there’s some explaining to do. Mung beans are a popular ingredient elsewhere, particularly in Asia, but aren’t well known in the U.S. So, it’s displaying the beans in small jars at the pop-up events that explain that the legume “magically scrambles like an egg.”

The push comes as other plant-based products are gaining attention. Beyond Meat, which is backed by celebrity investors, saw its stock price soar in its initial public offering this month. Nestlé plans to introduce its plant-based “Awesome Burger” in the U.S. later this year, and even meat company Tyson is coming out with its own plant-based meat. And restaurants are taking on such products. Among other announcements, Burger King plans to bring the Impossible Whopper, made with a patty from Impossible Foods, nationwide, while Del Taco started offering Beyond Meat tacos in April.

Here are some of the dishes and displays Ad Age saw at the Just Egg pop-up in Chicago: