Lamar to Send out Photos of Celebs to Billboards in Real Time to Promote Recycling
READ THIS NEXT
Trending: Eilish’s ad hit, Saved by the Bell’s reboot and Fauci’s bobblehead 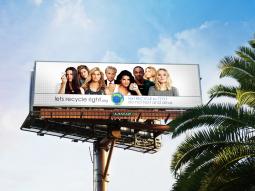 Out-of-home advertising -- which is enjoying a renaissance thanks to new technology -- is gearing up for another first. Lamar Advertising will live-stream a PSA campaign for Recycle Across America from a celebrity photo shoot in Los Angeles on April 21, the day before Earth Day. The "live-stream" means that photos from the shoot will be distributed to the billboards within minutes of them being taken. Lamar says it's never been done before.

The PSA promotes RAA's standardized recycling bin labeling system, used by Whole Foods, Kiehl's, Bank of America and NBC Universal among others. Lamar will donate time across more than 100 digital billboards for the campaign. The company estimates the value at $350,000 in ad contributions for the week of Earth Week. Celebrities involved in the effort include Jason Kennedy, host of E! News; actress Emmanuelle Chriqui; model and actress Angela Lindvall; and volleyball pro Gabby Reece.

Turning to other charitable acts, SC Johnson is donating 50,000 units of Off! mosquito repellent to AmeriCares for use in Florida and El Salvador as part of up to $15 million in donations to help people guard against the Zika virus. El Salvador has one of the highest rates of Zika in Central America, and Florida has the highest number of travel-related cases in the U.S., said SCJ Chairman-CEO Fisk Johnson in a statement. Of course, SCJ is also ramping up production for what's expected to be a record season for sales of bug spray in the U.S. after the U.S. Centers for Disease Control earlier this week upgraded already dire warnings about the spread of the virus, which can cause severe birth defects if pregnant women become infected. While it's likely to first appear in the coming weeks in southern states, the CDC now projects mosquitos that can carry the virus will spread to much of the Northeast and Midwest this summer.

Gillette is the latest brand to unveil a Summer Olympics campaign. The effort, called "Perfect Isn't Pretty," features its global roster of athletes for the 2016 Rio Games. The idea is to show said athletes, their faces beaten up by their sports but treated far more gently by the Fusion ProShield razors with protective strips that go all the way around the blades. Stars in the ad from Grey include 23-year-old Brazilian soccer standout Neymar Jr., U.S. decathlete Ashton Eaton, Chinese freestyle swimming star and Chinese Navy lieutenant Ning Zetao, and British team pursuit cycling star Andy Tennant.

Anheuser-Busch InBev keeps on gobbling up craft brewers. The beer giant this week announced the acquisition of Devils Backbone Brewing Co. of Virginia, maker of brands such as Vienna Lager. Beer Business Daily noted the acquisition gives A-B InBev an "outpost in craft's current hotbed: The Mid South was second highest for craft growth in [supermarkets] last year per IRI (+16.5%)." The publication added that the brewer is "one step closer to owning a craft entity in every major region in the U.S., with the South Central/Southeast among the glaring holes." 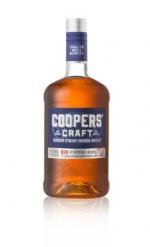 Brown-Forman is making a new play in the hot-selling bourbon category. The liquor giant this week announced the debut of Coopers' Craft, its first new bourbon brand in 20 years. Barrel makers are called coopers and Brown-Forman says it is the only major distiller to make its own barrels. "Coopers' Craft is the result of decades of experience in mastering barrel-making and maturation techniques to create truly unique bourbons," Lawson Whiting, exec VP and chief brands and strategy officer for Brown-Forman Brands. The new brand will initially be sold in eight southern states, including Florida, Louisiana and Tennessee. Marketing will include digital/social, PR and sampling. The agency is WeHolden.

Tesla earned tons of press around the 325,000 reservations made for its forthcoming Model 3. But this week was a different story with the Monday announcement of a voluntary recall of 2,700 Model X crossovers due to a third-row seat that failed a crash test. But by one score, Tesla has not taken much of a PR hit. Amobee Brand Intelligence found that between April 11-12, only 9% Tesla digital content engagement was recall related. Compare that to Volkswagen. Seventy-three percent of digital content engagement around VW was emission related after its emissions-rigging scandal broke last year, Amobee stated.

Pasta sauce is getting a couple of upgrades. First up, Kraft Heinz has released a line extension for its Classico pasta sauce brand called Riserva, with flavors such as Eggplant & Artichoke and Arrabbiata. A McCann New York campaign uses the tagline "Open a Bottle of the Good Stuff." In one spot, the idea of foodies opening and savoring a bottle of sauce much like a fine wine is played up with a host asking if anyone wants to smell the lid. Another spot features a couple sharing "a bold red" bottle -- of sauce.

"Consumers just want to go back to the basics," such as sauces with no artificial ingredients or added sugar, but they're also "a little more gourmet," said Myrna Rexing, brand manager for Classico sauces. Suggested pricing is $4.99 per bottle, about $1 more than regular Classico. The campaign began in late March and marks the first time Classico has had a full national launch in a decade, Ms. Rexing said. For those searching for something even more upscale, Victoria Fine Foods is bringing out artisanal pasta sauces exclusively for Sur La Table. The sauce, in five flavors including Organic Pomodoro and Chianti Marinara, is being sold by Sur La Table for $12 to $13 per bottle. The line is Brooklyn-based Victoria's first co-branded partnership.

Just how loyal and dedicated are coffee drinkers? This week brought the long-awaited/already loathed (depending on whom you ask) changes to the Starbucks rewards program. The program now gives points, known as stars in the Starbucks system, based on spending rather than the number of purchases. Customers now earn two stars for each dollar spent and get a free drink or food item once they hit 125 stars ($62.50 in spending = freebie) rather than accumulating one star per purchase, regardless of the amount spent, and needing 12 stars to get a freebie. Amid the changes at Starbucks, Dunkin' Donuts touted rewards in its own DD Perks program including a not-too-subtle poke at the Starbucks system. From April 14 to 21, anyone joining DD Perks using the code "STARS" gets 125 points toward a Dunkin' freebie, along with the free drink one usually gets just for signing up. At Dunkin', people earn five points for every $1 spent, and 200 points ($40 in spending) leads to a free drink.

#Starbucks Your new #StarbucksRewards I can do the math pic.twitter.com/KoFa3NDHQ6

Confused yet? There's more. Starbucks said anyone who buys something in one of its shops between April 12 and May 2 can earn gold status in the program for a year, or gets gold status extended for a year if already a gold member. Perhaps that is one way Starbucks can calm the nerves of those who had trouble using the Starbucks app during the transition. Starbucks may have upset some of its fans, but it still had a commanding lead. In March, Starbucks had 12.1 million total active members in its rewards program. Dunkin' said Monday that it had 4.3 million DD Perks members. And there's still no national McDonald's coffee loyalty program -- yet.

Kerry Washington may not be keen on Photoshopped cover photos, but, hey, she is still selling makeup for Neutrogena. And when women of color kept contacting the Johnson & Johnson brand to complain it did not have foundation to match their skin tones -- or the skin tone of its high-profile pitchwoman -- she was part of the solution. So when it rolled out new shades in its Healthy Skin Liquid Makeup line last week, Neutrogena had Ms. Washington call some of those fans directly via FaceTime video chat, as chronicled in this video. "It's part of a long-term commitment to be more inclusive across the board," Ms. Washington tells one customer.

In its quest to return to prominence with fickle teen shoppers, Abercrombie & Fitch Co. has tapped a new marketing executive. Ashley Sargent Price was appointed senior VP and creative director of marketing at the New Albany, Ohio-based brand. A former senior VP-brand creative at J. Crew, Ms. Price will be responsible for the creative marketing of Abercrombie & Fitch, Abercrombie Kids and Hollister. As the retailer has been faced with rising competition from the fast fashion likes of Zara and H&M, she'll have her work cut out for her, though Abercrombie did just post its first same-store sales quarterly increase, of 1%, in three years.

Tom "TD" Dixon has joined Jack Link's as its first chief marketing officer. Mr. Dixon was most recently CMO at Welch's, a job he took in 2014, and previously worked at companies including Schwan Food and Kimberly Clark.