What Marketers Need to Know Before Using Departed Icons in Ads
READ THIS NEXT
The NFL and its 32 teams have 3,195 total sponsorships, worth more than $2 billion

In the world of advertising, these are great days to be a dead celebrity. Icons like Marilyn Monroe, Frank Sinatra (in the recent Jack Daniel's campaign) and Audrey Hepburn (in a new Dove Chocolate ad) are ubiquitous -- with their images, old movie clips and voices being deployed by creatives to emote an image and quality that moves mega-units for brands.

Today, the marketing, licensing and commercial use of dead celebrities is an estimated $3.0 billion business. Our own payments to the beneficiaries of departed icons utilized in commercials have grown by nearly 20% in the past two years.

So why, according to a recent survey conducted by our company of senior production executives at the top agencies, would 80% rather work with a live celebrity than a dead one? Aren't they, and their real-world demands, more problematic than working with a dead celeb, who can't insist you fly their trainer, vegan chef, hair and makeup people first-class to the set or banish brown M&M's from the craft table?

No. It's because dealing with estates of departed icons and the parties related to their image and product -- movie studios, music license holders and the like -- can be fraught with complexity that sometimes ends in litigation. And like brain surgery and hair styling, it's something best done by experts.

So what do you need to know before tying the fortunes of your client to the powerful image of a dead star?

Tracking down the person authorized to negotiate can be problematic: While this is not as much a factor with a sophisticated and long-profitable estate like that of Marilyn or James Dean, the issue of who has the power to make the call can involve a lot of research, especially if it's a less frequently utilized person or their creative product. While in some cases it's a corporate licensor, estate attorney or estate department of a studio, it could be a family member, his attorney, or even a group of family members. As for the big names, they are getting increasingly concerned about over-exposure and more selective about what they tie their image to in order to keep their market value high.

Button up all the layers of rights needed: It's not just the estate of the talent that needs to be vetted for use, it is often the movie studios, photographers, record labels and music publishing holders who have a stake in the creative product. When the clip or music is old, the library and the rights may have changed hands multiple times, via mergers -- even divorces -- making the hunt all the more time-intensive. As for a spot like Macy's iconic "Anthem" campaign, which utilized clips of stars like Desi and Lucy, Charlie Chaplin, Johnny Carson and more, the list of parties whose sign-off is needed may well have been in the dozens.

You could be cutting a lot of checks: Be mindful that with many estates, the onus will be on the advertiser and his talent payment rep to cut the checks, which could go to a bevy of the star's family members, along with their agents, attorneys, etc. Not to mention the studios and licensees who will demand a slice of the pie for their footage, copyrighted images or music and more.

You could find yourself in the middle of a family feud: Nothing tears a family apart like a fight over an estate, and that sometimes extends to the mega-bucks generated by a deceased star's likeness. It's not uncommon in situations where advertisers have to negotiate with a descendent of a star that the well-meaning marketer ends up in the middle of a family feud -- an ongoing drama that has boiled for decades. Who wants to get in the middle of this kind of family reunion, when big budgets, deadlines and your relationship with the client are on the line?

Be especially careful with internet content: Be it a web-only ad or a promotional site, sometimes marketers play a little faster and looser, calculating that the chances of being discovered by the rights holders are far less. Big mistake. Those who manage big estates, studios, record labels and SAG-AFTRA are devoting huge resources to keeping their eyes on this area, to uncover unauthorized use of clips, images and songs and claim their rightful share.

And lastly, it could be charitable: For the altruistic-minded ad executive, going with a dead star may be the way to go. Why? Because some leave a hefty chunk, and a few, the entire profit generated by their estate and likeness, to charity. The mega-bucks generated by the use of Albert Einstein's image in ads for brands like Microsoft, Intel, Xerox and Chrysler have bequeathed millions to his beneficiary, The Hebrew University of Jerusalem. 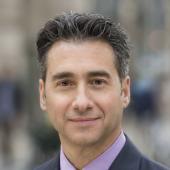 Paul Muratore
Paul Muratore is president-CEO of Talent Partners, a talent and production support services firm.
Follow View all articles by this author

The NFL and its 32 teams have 3,195 total sponsorships, worth more than $2 billion