Stars like Megan Rapinoe scored on and off the field, lifting the game to new heights and raising attention for equal pay
READ THIS NEXT
Beyond Meat jumps on expanded ties with McDonald’s, Yum Brands 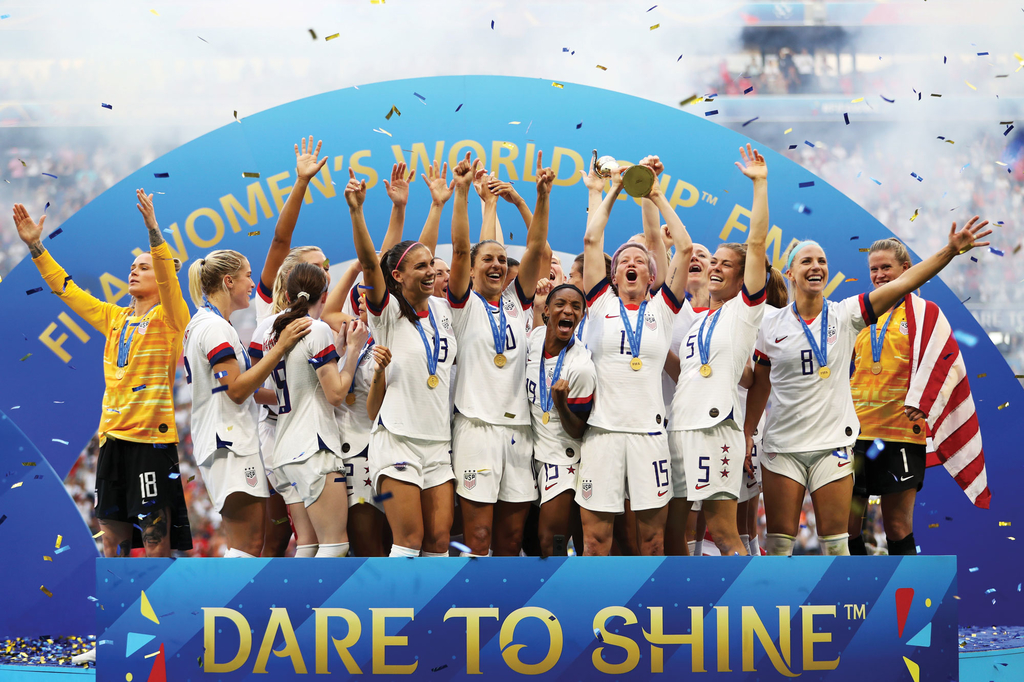 For U.S. women’s soccer, the question is not whether the sport can capture the imagination of the public. It’s whether that interest can be sustained beyond the every-four-years spectacle of the World Cup. Megan Rapinoe, Alex Morgan, Carli Lloyd and other superstars this year proved that the game is on the verge of becoming a permanent fixture in the U.S. pro sports scene.

The sport vaulted into the limelight in July when the U.S. team won the World Cup in France. The team not only dominated on the field, its players became a symbol for women’s equality. Months before their victory, team members filed a discrimination lawsuit against the U.S. Soccer Federation, the sport’s governing body, seeking equal pay with the men’s team. A trial is set for May.

But in the court of public opinion, the women are already winning as fans come to pro games in greater numbers. The 7-year-old National Women’s Soccer League (NWSL), whose season runs from April to October, reported record season attendance of 797,000 this year, up by more than 145,000 from 2018. (The NWSL receives financial support from the U.S. Soccer Federation, which oversees both men’s and women’s soccer, but U.S. Soccer does not have a financial stake in the league or its teams, according to the federation.)

The nine-team league is also enjoying TV ratings momentum. The Oct. 27 championship between the North Carolina Courage and Chicago Red Stars drew 160,000 viewers on ESPN, the highest single-match rating in three years, while regular-season games drew an average of 81,000 viewers across ESPN networks, up 7 percent year-over-year, according to ESPN. In October, the NWSL announced Louisville will be added as a tenth team in 2021. It’s called Proof Louisville FC in a nod to the city’s booze heritage. Sacramento is reportedly close to adding a team, too.

“All the stars aligned this year for women’s soccer and they—as individuals, teams and league—brilliantly navigated the ‘galaxy,’ including headwinds and tailwinds they faced,” says Mary Scott, president of global communications for sports and entertainment agency United Entertainment Group. Players “walked the talk,” she says. “Winning the World Cup was huge, not just for the victory on, but also off, the field.” Because it “boosted their voices and reach even further.”

Rapinoe is among the hottest endorsers in sports. Her backers include Visa, whose pact with U.S. Soccer Federation that began in May calls for more than half of its sponsorship payment going directly to women’s programs. Rapinoe says she influenced that decision. “For me, that’s really important, to not only hold the federation accountable, which is what we’re trying to do, but also hold brands accountable,” she said in an interview. “If you’re going to partner with the federation and you want access to the women’s team, which basically every brand does, then you need to show up in a certain way.”

Women’s soccer has basked in the spotlight before, only to see momentum stall. Popularity spiked in 1999, the year in which Brandi Chastain ripped off her jersey before 90,000 people packed in the Rose Bowl to celebrate a winning World Cup goal. The surge in interest led to the creation of the Women’s United Soccer Association pro league in 2001. But the league folded just three seasons later due to lack of corporate sponsorship support.

The key to NWSL’s long-term success will be luring brand dollars and TV deals. The league’s short-term TV rights deal with ESPN covered only the second half of the 2019 season. In October, NWSL signed a deal with Interpublic’s Octagon to help negotiate its next media rights deal, as well as sponsorships.

On the sponsorship front, the league scored a major win when Budweiser signed on in July as official beer sponsor. The brand followed that up in October with a campaign starring Rapinoe that seeks to lure brands in other categories, from restaurants to deodorants, to step up and support the league. “If anybody knows me, I love a good public shaming for the purpose of progress, and I love a good public call-out,” Rapinoe says about the campaign, which asks fans to publicly pre-pledge support for any brand that signs on as a sponsor.

The campaign has “certainly opened up some conversations and some positive dialogue that are ongoing, but nothing to announce at this point,” says NWSL president Amanda Duffy.

The campaign links Bud to the greater cause of equal pay. Rapinoe says cause marketing is great, but it’s not enough. “I think we need to position ourselves in a way that’s like, ‘Yes, you’re going to get the social cause out of this, but also you’re going to get an amazing product. You’re going to have access to incredible athletes who are very dynamic, who are doing a million other things other than just inspiring 12-year-old girls and boys.’”

Follow View all articles by this author
Angela Doland