Marketers of the Year No. 7: Ally Financial | Ad Age
Skip to main content

Marketers of the Year No. 7: Ally Financial

Online bank drives growth and reputation with unrelenting focus on customers
READ THIS NEXT
The Week Ahead: Netflix reports earnings and brands navigate Inauguration Day 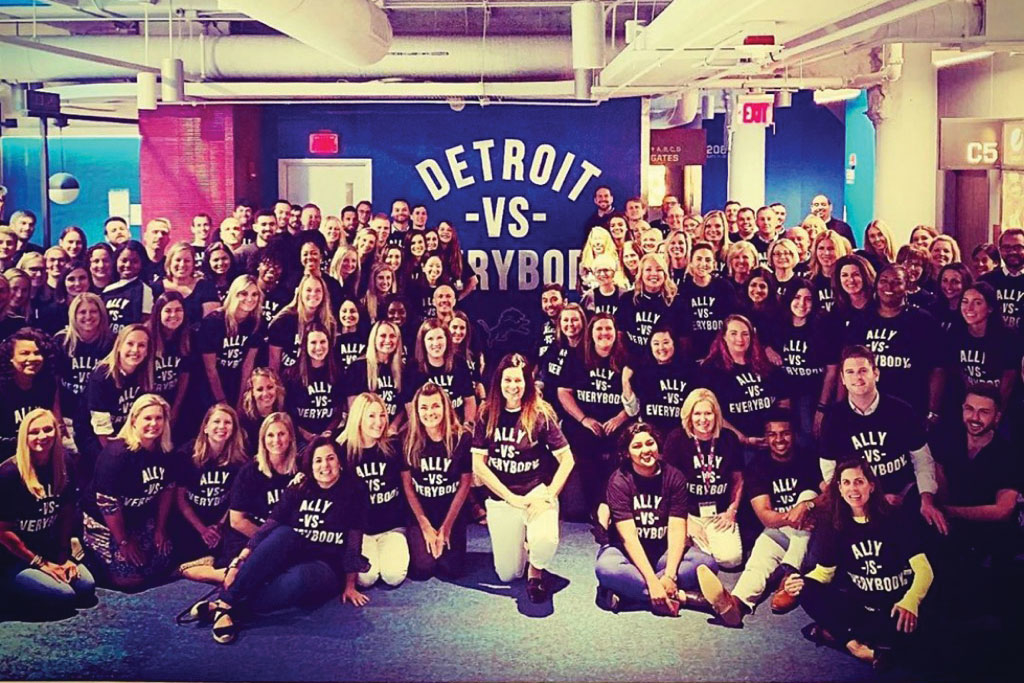 Ally Financial Chief Marketing and Public Relations Officer Andrea Brimmer likes to refer to the company’s brand as a weapon. If so, it’s a weapon of mass seduction.

Since its founding as a category disrupter a decade ago, Ally has generated more than $100 billion in deposits, doubled its brand value and commanded a 90 percent satisfaction rate in a category that normally ranks in the mid-30 range. Ally is now one of the five fastest-growing banks in the world, according to The Financial Brand, and was named Money magazine’s best online bank in 2019 for the second consecutive year.

Brimmer and her team accomplished all this with only a 2 percent share of voice in a category that spends $5 billion annually with a laser-sharp marketing message: We are an unrelenting ally for consumers.

Supercharging
“It’s been their strategy for a while, but in the last year-and-a-half, Andrea and her team have really supercharged it,” says Jess Greenwood, global chief marketing officer at R/GA, Ally’s digital agency. “They are making sure that they are doubling down on their product and what’s true about it: that their customer service is exceptional and they really do put people first.”

Launched in 2009 near the end of the Great Recession, Ally sent shockwaves through the category by pioneering 24/7 online banking, eschewing fees and encouraging consumers to (gasp!) rate banks as they do sushi restaurants. But that first-mover advantage waned as other financial institutions jumped into online banking and the downturn ended.

“Their voice, which was very dramatic and differentiated in 2008, became a bit less pronounced,” says Avi Dan, principal at Avidan Strategies, which was retained last year to help the company review agencies. He said the process was remarkable on several counts. First, Ally paid the shops for participating. And it “zero-based” the process, he says, so that within the space of four months Brimmer and her team conducted not just one but three reviews, eventually tapping Anomaly for creative, R/GA for digital and Mediacom for media.

The pitch
Anomaly founding partner Carl Johnson says the shop normally turns down 75 percent of pitches that come its way, but went after Ally because it was drawn to the bank’s ambition, which he says matched its own. “They understand really important things like the link between creativity and effectiveness,” he says. “They know creative work that engages people more, that disrupts people more, can be more effective work.”

Anomaly’s first campaign for Ally last year was an open letter to America. It consisted of the headline “Your bank makes you” followed by the scarlet-faced cursing emoji. “We talked about how you need to start looking around,” says Brimmer, “you need to pay attention to your money and ask your friends, ask the internet, and we think you’ll find us. Then a week later we launched a cash promotion where we were paying a 1 percent bonus on top of our existing savings rate.” She says the goal was to generate a billion dollars in additional deposits, “but we ended up in two weeks generating over $2 billion in additional deposits and 74,000 new accounts opened, which was almost double the previous quarter.”

Doing it right
It’s worth noting that Ally dropped rates four this year in alignment with the Federal Reserve, and has still retained a 90 percent positive sentiment rating, says Brimmer. “Just as we tell people when we raise the rate, we tell them when we cut it,” she says. “If you are going to have a tagline like ‘Do it right,’ you have to do it in the good and in the bad.”

The company has also been a proponent of using games to teach financial literacy and this year ran a Monopoly program, recently turning six U.S. cities into live virtual reality game boards. Clues to game pieces were seeded on a special website. Brimmer says 400,000 people played, the company collected 100,000 new prospect emails and there were 1.2 million visits to the website.

But Ally’s most outstanding characteristic might well be its humanity. It has underscored its “do right” mantra in marketing with programs such as its “Banksgiving” push, in which call center workers are authorized to give money to customers—in one case awarding $50,000 to a woman who distributes holiday baskets to people in need. “If you believe in your brand as a weapon it is easy to take half a million dollars and give it to people in the call center and say ‘Do what you want with it,’” Brimmer told the Association of National Advertisers Masters of Marketing conference in October.

Scrappy underdog
This year, Ally put a new twist on Banksgiving, asking customers how they pay back the community. From that pool it chose people to “pay back,” including a Houston woman and her daughter who were given a rent-free home for a year. Brimmer says a similar program will become year-round in 2020, and that the bank will reward customers’ “random acts of rightness” monthly with gifts from Ally.

“The thing that makes us special is that we have always been this scrappy underdog and we have never lost that scrappy underdog mentality,” says Brimmer. “There is this incredible humbleness that exists within Ally and I think we need to approach every single day with that mentality of ‘How can I do something differently? How can I make a huge difference both personally and professionally?’”

Dan says that ethos extends to Ally’s employees and agency partners. He recalls that after his job on the review was over, Brimmer paid to fly him down to Charlotte, North Carolina, for the agency onboarding and gave him a present. Johnson calls Brimmer’s team “pretty damn near a perfect client.”

“Everybody fully bores into the vision and are really excited to be there,” says Greenwood. “I mean this in the nicest possible way: They are like a very, very happy cult. They really think they are changing the category. And I think they are.”