'Our margins do not allow for the commissions that Uber is taking,' warns owners group
READ THIS NEXT
A regularly updated list tracking marketers’ response to coronavirus 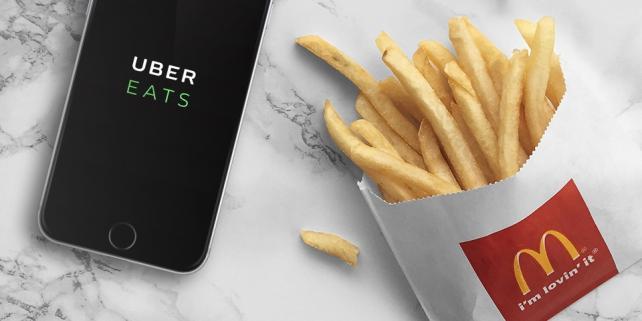 Delivery is a high priority for McDonald's CEO Steve Easterbrook, and a big worry for franchisees.

"Our margins do not allow for the commissions that Uber is taking nor the added rent and service fees McDonald's is enjoying," a newly formed organization representing most U.S. franchisees told members last month in an email obtained by Crain's. "Delivery is a growing segment of our business and it will one day cannibalize our on premise restaurant sales. If we allow this to occur under the current arrangement, our net cashflow will go down."

The dispute over delivery marks another flashpoint in the increasingly tense relationship between Easterbrook and franchisees who bear much of the cost of his effort to remake McDonald's as a "modern, progressive burger company." Restaurant owners are spending up to $315,000 per restaurant to remodel their stores to corporate-mandated standards that include $965 chairs and the construction of a wall separating the kitchen from customers, install self-order kiosks and buy new refrigerators to store non-frozen beef. That comes on top of steadily rising labor and food costs.

The tensions arise from a conflict baked into McDonald's business model: The company makes money off top-line sales, but franchisees make money only if their sales exceed their costs. When headquarters issues edicts designed to boost sales, they often create new expenses that eat into franchisees' profits.

After McDonald's shifted almost all stores to franchises in an effort to boost corporate-level profitability, those owners now control 95 percent of its restaurants. In October, many franchisees voted for the first time in McDonald's history to form an independent association. The National Owners' Association drew about three-quarters of the chain's 1,700 U.S. franchisees to its second meeting in December. The group is advocating for reduced remodeling costs and a change to the delivery deal, among other issues.

The stakes are rising quickly. Delivery has become a $3 billion global business for the fast-food giant over the past two years, and "we've been moving at a pace that is unprecedented in the McDonald's system" to expand delivery, Easterbrook said on an earnings call last summer. More than 19,000 locations globally now offer delivery—up 144 percent in 18 months—including about 8,000 U.S. restaurants.

"We are confident that delivery offers additional growth potential for our business," Easterbrook told analysts in late January. "Even with the momentum we already have established, we know we have an opportunity to let more customers know that McDonald's will bring meals to their homes, offices and college dorm rooms."

Franchisees say they understand that delivery is critical to future growth but warn it will cannibalize existing sales eventually. They also say the current deal unfairly benefits UberEats and McDonald's. Right now, UberEats takes a 20 percent cut of every order, according to three franchisees who requested anonymity. Franchisees pay that fee. Then McDonald's comes in to take its cut.

McDonald's charges franchisees a 5 percent royalty on every sale. It also requires its franchisees to lease their locations from the company, with rent based on a percentage of sales, usually about 10 to 12 percent. Franchisees gripe that McDonald's is currently charging royalties and rent on the full amount of the order, including the 20 percent they never see. This whittles an already slim profit margin to untenable levels, they say.

In a survey by the National Owners' Association, 785 franchisees responded "yes" to the question, "Do you support an effort to negotiate a better commission/split with our third-party provider and McDonald's?" Eight said "no." Similarly, 758 owners said they were not satisfied with current delivery economics, while only 23 said they were. And 565 said that delivery is not contributing positive net cash flow, compared with 198 who said that it was.

"I believe in delivery, but the commissions everyone else gets from us is much higher than what we get, if we get anything at all," one franchisee wrote in the survey's comment section.

Owners, again, are skeptical. "While I may be getting a very small cash flow benefit from my restaurant that does $4,000 (per week) in delivery sales, I do not believe the benefit is substantial enough to sustain it," another franchisee wrote in the NOA survey. "It will eventually begin to replace store sales and the pass-through is not equal."

Owners also point out that while they're technically allowed to increase their prices in the UberEats app to offset their increased expenses, McDonald's discourages the practice.

McDonald's has shown it's willing to listen to franchisees and the National Owners Association. In November, the chain pushed back the 2020 deadline for remodeling restaurants by two years after franchisees complained about the costs.

"As McDelivery continues to evolve, we remain committed to working with our franchisees to evaluate the program, as well as ensuring they have the support they need to run great restaurants and provide quality experiences and convenience for our guests," a spokeswoman says.

—Brigid Sweeney is a reporter for Crain's Chicago Business

Brigid Sweeney
View all articles by this author