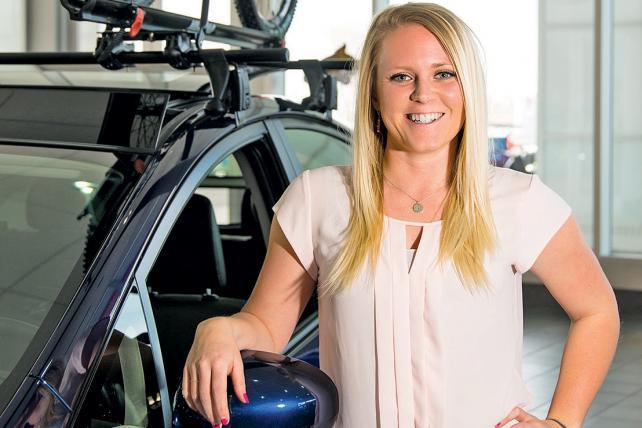 Laura Madison is shaking things up at Toyota of Bozeman in Montana.
Credit:

Saleswoman Laura Madison markets herself and the brand she sells, Toyota, but not her dealership.

Ms. Madison, 25, won't help clean snow off cars at Toyota of Bozeman in Bozeman, Mont. She won't take "ups" -- walk-in customers. She hands out her personal cellphone number instead of the dealership number, so customers' calls are not routed to other salespeople.

Her unconventional approach to sales has riled some co-workers. But her boss, dealership co-owner Jeff Kayser, says he wishes he had "10 more people like her."

"If she would have worked in any other store, she wouldn't have lasted because we really had our blows," Mr. Kayser says. "But she's worth it. It may not be the way we want to sell cars, but it's going to be the wave of the future."

Indeed, Mr. Kayser has tweaked his store's rules to accommodate Ms. Madison and now hopes to reshape the dealership to mimic her marketing approach.

She paid $3,000 to have her personal car wrapped to promote her Web site, lauratoyota.com, not the dealership's. About every 60 to 90 days, Ms. Madison makes a sale from someone who saw her car, she says.

Ms. Madison spends $200 a month to host the site and download the store's inventory to it, she says. She writes blogs, posts dealership news, offers tips for test driving and how to achieve good gas mileage and supplies product information, including up-to-date video walk-arounds of new vehicles.

Updating her site is a more productive use of her time than, say, brushing snow off cars, Ms. Madison says. The site gets about 300 unique hits a day and leads to possible future sales for her.

If a customer goes to the dealership's Web site, toyotaofbozeman. com, Ms. Madison says, "that lead doesn't always come to me, it goes to the staff. So that's a lead I would lose."

She regularly sends notes to her customers saying things like "It's your car's birthday." She aims to have her nearly 600 customers hear from her every 60 days and starts addressing Christmas cards in October. "Hallmark totally knows me," she says.

She plans to hire and pay her own assistant.

Mr. Kayser, 46, says: "It's been a long, hard three years with Laura Madison. It's been really hard," especially "if you're an old-school car guy."

Mr. Kayser is co-owner of Ressler Motors in Bozeman, which also has Chevrolet and Cadillac stores. "I've accepted what she's doing, but I've had to sit down with my four other managers and explain that she is different and she's not going to do some of the things we've been doing."

He stuck with Ms. Madison because her approach works.

When Madison started in 2011, the store averaged 213 new and used cars a month. This year it will average more than 330, he says. Ms. Madison sells about 20 cars a month, up from 12 when she started three years ago, and Mr. Kayser predicts she'll top 30 a month soon.

In 2013, Toyota of Bozeman ranked fifth in customer satisfaction for sales and sixth in sales retention among the 74 Toyota stores in the region, a Toyota spokeswoman says. In 2010, before Ms. Madison arrived, Mr. Kayser says, "we were never close to that. We were always in the middle of the pack." He credits her 600 clients, who are intensely loyal to her, for helping to boost those numbers.

"I've never seen anyone market themselves the way she does," Mr. Kayser says. "I don't have many salespeople who'll spend $30 on anything, yet she'll spend $3,000 of her own money marketing herself."

He adds: "You'd think some of these people who've sold cars for years would try doing some of the things she's doing, but they're not. Those that try can't keep up."

Changes ahead
Now, Mr. Kayser is changing his dealership's culture to be more reflective of what Ms. Madison is doing.

Already, he has lessened security to allow Ms. Madison access to social-media sites during work hours, agreed to let the sales staff set their own schedules and hired a delivery coordinator to handle car deliveries, taking that task off salespeople's shoulders.

In late June, the dealership formed a focus group of 12 hand-picked employees from across the company to figure out how to adopt more of Ms. Madison's marketing techniques. Mr. Kayser wants Ms. Madison to train his staff on self-promotion marketing.

The store already has a business-development center. But Mr. Kayser asks: "Do we need to create a whole other department to do this kind of marketing? We want to come up with some kind of job description and a department in the dealership similar to a BDC by the end of August."

Mr. Kayser also plans to hire younger salespeople who have Ms. Madison's drive and marketing acumen. He is so fond of Ms. Madison's tactics that his 18-year-old son will train under her as he prepares to take over the business one day.

Mr. Kayser does not worry that she will leave him and take his customers with her because of his rural location and her loyalty to Toyota.

"The nearest Toyota store is 80 miles away from here," Mr. Kayser says. "If I were in more of a metro area, I would be concerned about that, absolutely. But that's why we tried to accommodate her because what she's doing is so different here."

Money isn't her motivator, she says. "I get to meet amazing people and get to grow and grow. When I end the month, whether it's good or it's bad, I have one person in the world to blame. I like that freedom."

--Jamie Lareau is a reporter for Automotive News

Jamie Lareau
View all articles by this author