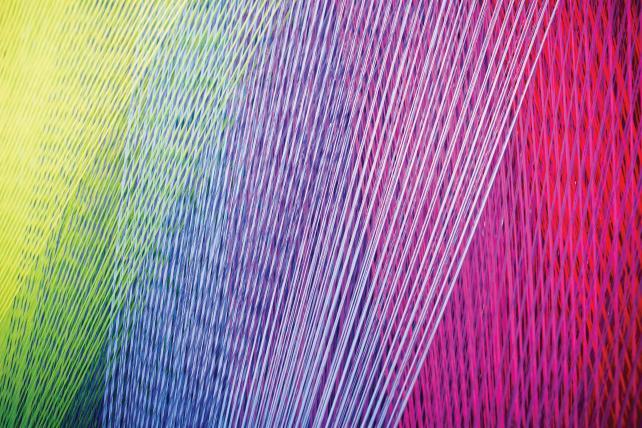 In a world of emerging agency models, Procter & Gamble's Woven, created to service the company's big-spending fabric-care brands, stands out for its audacious sprawl: The shop comprises personnel from two agency holding companies plus in-house media planning and buying.

Multi-agency models have become more popular recently, but most bespoke solutions involve only one holding company. Woven, co-lead by executives from WPP's Grey and Publicis Groupe shops Leo Burnett and Saatchi & Saatchi—and which began operating last fall—is testing the limits of cross-agency collaboration in an industry known for turf battles.

Servicing brands including Tide, Downy, Un-stopables, Gain and Bounce, Woven advances two movements Chief Brand Officer Marc Pritchard has been pushing: "fielding the best talent" from a wide range of shops for brand creative and rebundling the great unbundling of media and creative that began a generation ago in a "one-stop shop."

The question for some is whether Woven, given its sprawl and size, can avoid fraying into something akin to Frankenstein's monster. The marketing industry is watching closely to see if the model can be applied elsewhere, especially as more marketers consider bringing additional media functions in-house.

"I think it will be a template for how in-housing will work for CPG," with an emphasis on putting marketers back in charge, cutting waste and investing "in craft and creativity," says Tom Denford, North America CEO of consultancy ID Comms.

On the media side, Woven includes a P&G internal team, with two veteran executives in Cincinnati and new hires in New York handling media planning and much of the buying. Though not part of Woven, Dentsu Aegis Network's Carat handles any buying that Woven's in-house team from P&G can't handle (including TV). Carat recently replaced Omnicom's Hearts & Science on the fabric-care business, although much of that work already had moved in-house.

It's meant to function like an agency in its own right, but Woven is not a standalone legal entity. While it does have an office (complete with its own kitchen, coffeemaker and Thursday happy hours), the agency still consists of component parts as a business arrangement. P&G pays the component agencies on the basis of the work their people do and according to their prior contracts.

"It hasn't required any changes in our agency contracts," says Kimberly Doebereiner, director of brand building integrated communications at P&G, who's also woven into Woven.

Woven into the media mix

Craig Stimmel, head of media partnerships for Woven and head of digital media partnerships at P&G, likens Woven to a "cloud agency." He and Kristen Barkimer, head of media strategy & planning for Woven and a senior brand manager at P&G, lead media planning from Cincinnati, with frequent trips to New York, where P&G has hired about 10 in-house media people.

Woven is in charge of media planning, plus digital buying and putting together some TV partnerships, such as integrations with Fox's "Thursday Night Football" last year. The deal included a series of prerecorded spots, including a mini-profile of Carolina Panthers running back Christian McCaffrey, and commentary by play-by-play man Joe Buck and color commentator Troy Aikman, all of which inevitably led to a discussion of laundry, stains and a reveal that each element was indeed another Tide ad.

Stimmel points to the deal as an example of how having creative and media under a single entity pays dividends.

"Paul [Bichler] and team were able to come up with some concepts on what would work really well for the brand, and we were able to fit that back with how the partnership would look, and work with Fox directly to be able to bring that to life in a new and powerful way," says Stimmel. "It had never been done before."

That deal was all about TV, but Stimmel also has a pivotal role on the digital side. Since he's already in charge of managing P&G's overall digital partnerships with big players such as Facebook and Google, leading the digital buying for North American Fabric Care through Woven is a logical extension. Integrating media so thoroughly into the process helps overcome the lingering urge for creatives to default toward TV to lead every campaign, Mongognia says. And having Stimmel, with his grounding in digital media, deeply involved is particularly helpful there, he says.

Woven sprang in part from Tide's standout, Cannes Lions Film Grand Prix-winning work for the 2018 Super Bowl from Saatchi, known as "It's a Tide Ad," Doebereiner says. That project, she says, proved the value of the having media and creative work closely. And by necessity, the huge project meant tapping into a wide array of agency talent, albeit only with Saatchi at that point.

With Grey and Leo Burnett now also a part of the team, P&G execs are counting on tapping an even deeper talent pool. The Super Bowl "becomes an all-hands-on-deck kind of experience," says Bichler. "As we did it, we stepped back and said, 'We do our best work that way, why don't we do it all the time?' That's what kicked off so much of the model."

But the agencies involved in Woven lost some key players as the shop was being created last year. Javier Campopiano, a key Saatchi creative behind "It's a Tide Ad," moved to FCB. Nick Miaritis, Tide lead at Saatchi for six years, moved to VaynerMedia. And Caroline Winterton, who led the fabric team for P&G at Grey, left to become CEO of Barton F. Graf. People familiar with the matter point to the departures as a sign of talent fleeing from the Woven model.

"We are happy with the talent we have," a P&G spokesperson says, adding that the departures happened before Woven began operating last fall.

Though tearing down the walls between media and creative was a key impetus for Woven, transparency issues also drove the decision to bring so much of the media effort in-house, Barkimer says. "Absolutely part of this is us narrowing down to a granular level the value our media provides and the cost of it," she says. "We're using a lot of analytics and data to drive each aspect of our media spend." Of course, running media in-house while also using an external shop (Carat) risks sapping buying clout. But Stimmel says P&G, the nation's second-largest ad spender, has plenty of heft in negotiations, noting that he retains his corporate role in addition to his Woven duties. "We can move with the agility we need for fabric care specifically but at the same time ensure we ladder up that scale to make sure we maintain competitive advantage," he says.

All sides insist an agency made up of creatives tied to multiple shops and holding companies hasn't produced the friction many on the outside expected. But realistically, Woven hasn't operated long enough to prove otherwise.

Woven leaders are counting on personal relationships to overcome any holding company rivalries. "You put people on a desk and spend time together and get to know each other as people and love what you're doing and want the same thing to happen," Diquez says. "When it's not an issue for the people at the top, it's not an issue for the rest of the organization." Mongognia says Woven uses a "people-first model," packing the team with "people who really are collaborative, really love these brands and want to succeed."

Still, the creative process remains a work-inprogress regarding such questions as whether Tide assignments will gravitate toward Tide's old agency, Saatchi, or Downy assignments to its old agency, Grey. "We're just seeing new briefs come in," Mongognia says. But he says he already sees an advantage in sharing insights across brands. "There are so many shared insights. It's really the same category."