The City Is First Major City to Pass Tax on Soda
READ THIS NEXT
Geico backs MLB’s ‘Field of Dreams’ game and McCormick makes a hot deal: Trending

The City of Brotherly Love is straining its relationship with Big Soda.

Philadelphia on Thursday became the first major U.S. city to pass a tax on soft drinks, dealing a significant blow to an industry increasingly facing a consumer backlash over health concerns. In a 13-4 vote met with cheers and applause, the City Council approved a plan to add a 1.5-cents-per-ounce tax on soft drinks containing added sugar or artificial sweeteners.

Since 2009, there have been about 40 attempts to enact a soda tax in cities across the U.S., including two such tries in Philadelphia. Only Berkeley, California's measure passed. What makes Philadelphia's proposal different this time is that Mayor Jim Kenney focused on the potential fiscal benefits of a tax rather than public health. That change in strategy could prove to be a watershed moment for the soda-tax movement.

"It's a perfectly valid thing to do, and it has additional social benefits on top of the revenue benefits," said John Donaldson, director of fixed income at Haverford Trust Co. in Radnor, Pennsylvania. The firm manages about $1.3 billion, including Philadelphia bonds.

Ali Dibadj, an analyst at Sanford C. Bernstein & Co. who covers the soft-drink industry, said Philadelphia's success stems from the fact that it didn't position the legislation as a health measure. "The path was a very different path," Mr. Dibadj said. "It was one not about obesity. It was one not directly about health and wellness. It was one about needing money and targeting this group that is a vulnerable group of companies for taxation."

When implemented in January, the tax on sugary and diet drinks is expected to generate $409.5 million over five years, according to Kenney, a first-term Democrat. Of that amount, $314 million would go to programs such as expanding pre-kindergarten and renovating recreation centers and libraries.

The city's goal is to maintain a balance of 6% to 8% of its general-fund expenditures, and the extra revenue from the tax would help reach that mark. Currently, Fitch Ratings estimates the level at about 2%. The ratings company ranks Philadelphia A-, the seventh-highest investment grade. 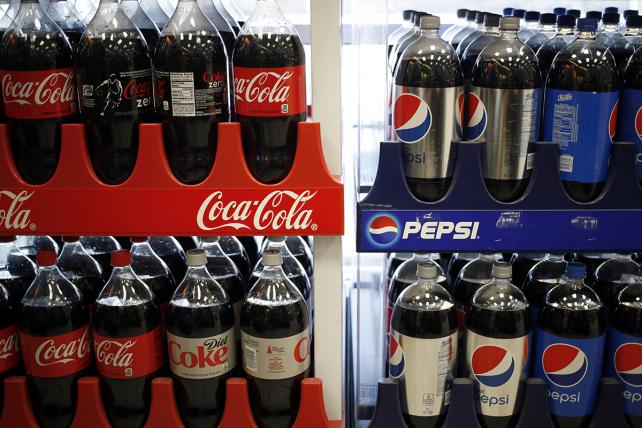 Soda taxes are another sign of the consumer backlash hitting companies like Coca-Cola Co., PepsiCo Inc. and Dr Pepper Snapple Group. Per capita consumption of carbonated soft drinks fell to a 30-year low in 2015, according to data compiled by Beverage Digest, a trade publication. Tax proposals are active in San Francisco and four other cities, and two states -- Alabama and Illinois -- according to Healthy Food America, an organization that supports soda-tax campaigns across the U.S.

The tax debate has passionate backers on both sides. Advocates say it's a viable way to fund important programs while also addressing obesity, a serious health concern. Opponents say the levy disproportionately affects the poor, unfairly singles out the beverage industry and provides only a diminishing source of income for city programs.

"It also is taxing a product that we know is unhealthy and therefore sending a strong message to folks that consuming less sugary drinks is going to be good for them," he said.

Philadelphians for a Fair Future, another group supporting the initiative, received donations from former New York Mayor Michael Bloomberg, whose philanthropy supports anti-smoking campaigns and other health initiatives. The former mayor is the founder and majority owner of Bloomberg LP, the parent company of Bloomberg News.

Krieger said the tax is regressive by the strictest economic definition of the term but progressive in that its benefits will largely go to lower-income residents. Diabetes and other illnesses associated with sugary products disproportionately affect the poor.

The beverage industry doesn't buy that line of reasoning. "That's an argument that's really paternalistic, where people say, 'OK, low-income people, we know what's best for you,"' said Larry Ceisler, a spokesman for No Philly Grocery Tax, a coalition backed by the American Beverage Association. "Is that the way it should be? Should the people who are going to benefit from it, should they be the ones to pay for it?"

Now that the proposal has passed, the American Beverage Association and No Philly Grocery Tax said they plan to take legal action, according to e-mailed statements after the vote.

"The tax passed today is a regressive tax that unfairly singles out beverages -- including low- and no-calorie choices," the beverage association said in the statement. "But most importantly, it is against the law."

Health experts say the action is warranted. Soft drinks "really are in a class by themselves," said Marlene Schwartz, director of the University of Connecticut's Rudd Center for Food Policy & Obesity. "They are uniquely associated with excess calories, and they're empty calories. Even a cookie might have some sort of nutrition in it, but there's really zero nutrition in sugary drinks."

Until now, that argument has failed to galvanize support for similar taxes. But the vote on Thursday shows the potentially game-changing benefits of taking a more financially focused route.

"Philly represents the clearest sign yet that revenue rather than health may become the new argument for sugary-beverage tax proposals," said Duane Stanford, editor-in-chief of Beverage Digest.