Potbelly's songs about lunch will play when UberConference users wait for their calls. | Ad Age
Skip to main content
Sign In Register 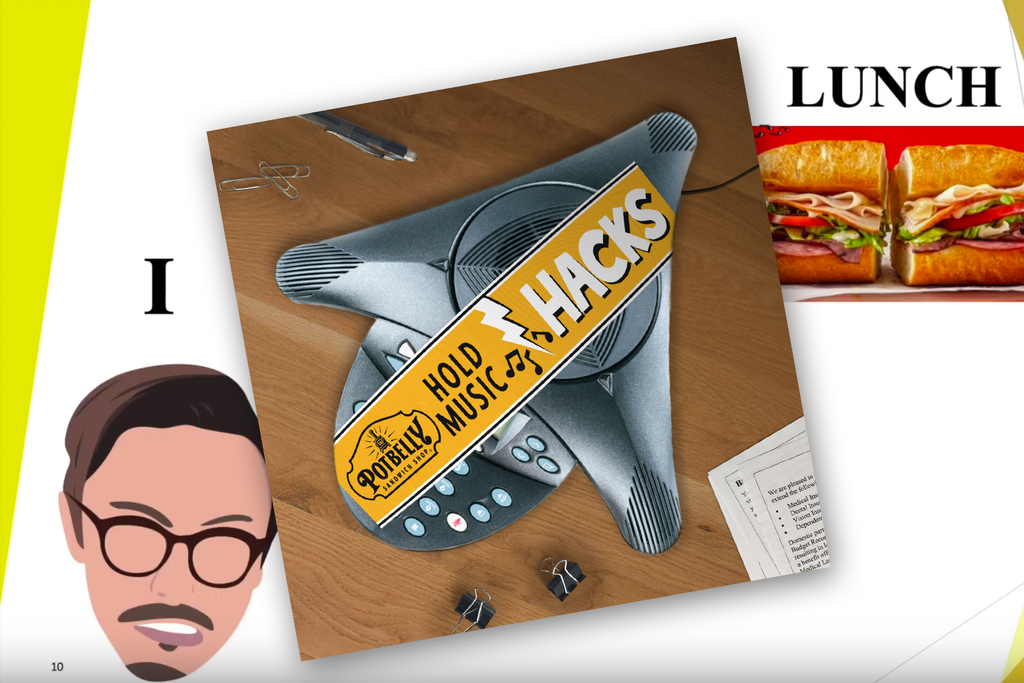 Potbelly Corp. is putting its “take back lunch” message to music by replacing UberConference’s hold music with songs made to make people hunger for its sandwiches. While the conference call service has played humorous hold music before, the deal with Potbelly represents the first brand integration. The sandwich chain did not pay for the placement, according to Potbelly Chief Marketing Officer Brandon Rhoten.

"When an amazing idea seems obvious, fits your brand, but hasn’t been done, it is your responsibility to bring it into the world," Rhoten says. "When we brought the concept to UberConference, it was clear they shared this view, and wanted to find a way to make it happen, despite it being a first for both brands."

On Tuesday, four songs featuring Potbelly-themed lyrics will play when people wait for calls scheduled with UberConference’s free service to begin. The lyrics are about taking lunch breaks in general, and more specifically, going to Potbelly. One of the songs includes the refrain: “lunchtime conference call/this is not right at all/gonna be a hungry meeting/we’d all rather be eating.”

At first, the songs were only set to be played during calls scheduled around lunchtime. But Rhoten says UberConference, which is owned by Dialpad, opted to run the songs all day on June 18. After that, the songs will be available for conference call hosts to choose as the hold music.

The songs are meant to portray Potbelly visits as a needed break from office life. “One of the things we landed on is the physical experience at a Potbelly is very different” from the vibe at other sandwich chains, such as Subway or Jimmy John’s, he says. “We’re about taking that time to recharge and reset and we’re more about the experience.”

The effort comes weeks after Potbelly used another lunchtime call tactic, “Lunch Doubles,” in which it offered to have voice actors sit in for people on calls so they could go out and enjoy a lunch break.

While the campaigns have plenty of nods to humor, lunchtime is serious business for Potbelly. The chain does the majority of its business during lunch hours. The campaign comes after a tough first quarter, when same-store sales fell 4.7 percent at the roughly 430 shops it directly owns. Some of the decline stemmed from the federal government shutdown (Washington, D.C. is its second largest market, behind Chicago) and the chilly winter. Potbelly expects same-store sales to be down slightly to flat, at best, this year. And Potbelly has already said it needed a new marketing approach to get people to buy more of its toasted sandwiches, salad, soup, cookies and shakes.

“Unfortunately, the incremental advertising investment that we launched in the second quarter has not generated the expected returns,” CEO Alan Johnson said in a statement in May. “As a result, we are taking a step back to assess our marketing effort, and we expect to take our learnings and apply them with a fresh approach to drive a more productive outcome.”

The songs come from DJ Marc Rebillet, Armchair Expert music director Bob Mervak and song-a-day YouTuber Jonathan Mann. Along with serving as UberConference’s hold music, they’re being posted on SoundCloud. And there is a video of Rebillet’s song set to slides filled with clip art and various images made to meant to evoke the feelings of pain that come from watching PowerPoint presentations rather than taking a lunch break.

The brand activation was cooked up internally by Potbelly’s team, which reached out to the people who came up with the songs. Jacobson Rost handled PR. It is one of the restaurant chains supporting “Take Back the Lunch Break Day,” an unofficial holiday started by paper towel seller Tork observed the third Friday of June that this year falls on June 21.

Music about food is having a moment. Earlier this month, Taco Bell released an original song from music production company Jingle Punks and sung by Darren Criss as part of its latest Nacho Fries campaign.

Here are clips to each of the four Potbely songs: