But Can Industry Keep Building Momentum Through the Holidays?
READ THIS NEXT
Matthew McConaughey, eyes shut, meditates for Lincoln to plug deal with mental fitness app 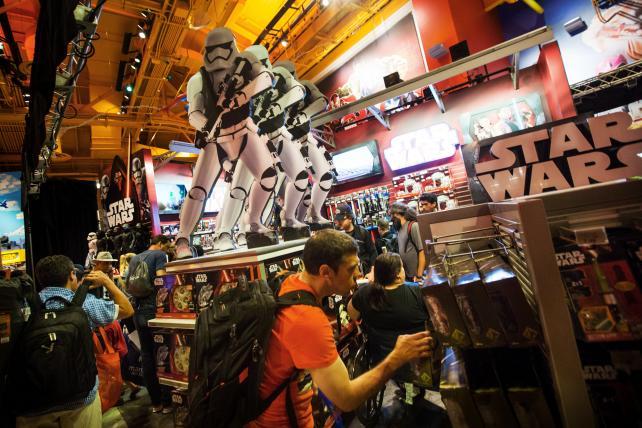 Attendees look at merchandise from the Walt Disney Co. Star Wars movie franchise during a 'Force Friday' event at a Toys R Us.
Credit: Michael Nagle/Bloomberg

A slew of new "Star Wars" merchandise debuted today, dubbed "Force Friday," prompting retailers including Amazon, Disney Stores and Parks, Target, Toys R Us, and Walmart to open their doors at midnight to be among the first to sell items like the BB-8 app-enabled droid, an animatronic Darth Vader and the crossguard lightsaber.

The new merchandise is tied to the latest installment in the "Star Wars" franchise," Star Wars: Episode IV -- The Force Awakens," which is expected to be one of the hottest movies of the year. And some retailers are acting quickly to distinguish themselves as "Star Wars" destinations heading into the holiday season.

"Whenever you've got an event like this, with the heavy merchandising that's going behind it … it's a good idea for retailers to catch the buzz," said Charlie O'Shea, VP-senior analyst at Moody's, adding that from here on out, retailers are in a "marathon race" to the holidays.

Some marketers pulled out all of the stops this week to promote the film's product line at select locations. In Times Square, Toys R Us kicked off the festivities yesterday with book signings, meet and greets, lightsaber training and a costume contest, leading up to the debut of a dedicated in-store "Star Wars" shop at midnight. 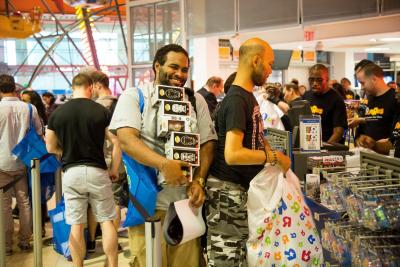 An attendee, center, holds boxes of the BB-8 toy from the Walt Disney Co. Star Wars movie franchise during a 'Force Friday' event at a Toys R Us.

The merchandise could give Toys R Us, in particular, a boost heading into the holiday season as it refocuses shoppers' attention on toys, its specialty, rather than video games or apparel. The retailer is expected to plug the "Star Wars" product line throughout the coming months with promotions and events.

"Toys R Us needs raging success in the toy business to be successful," said Mr. O'Shea, comparing it to general retailers like Walmart and Amazon, which aren't as reliant on toys because they rely on a mix of merchandise. "['Force Friday'] highlights what [Toys R Us] is, which is a destination toy retailer. Toys went at this as hard as they could."

Target, which also has a dedicated "Star Wars" space in-store, pushed "Force Friday" with an interactive online experience where fans can share their "Star Wars" memories. It also teamed up with celebrities like TV personality Chris Hardwick, who live streamed his "Star Wars" shopping journey on Periscope last night.

Retailers that took part in the event, like Walmart and Amazon, also pushed exclusive items and promotions throughout the day. Pottery Barn leveraged the film with a new children's collection featuring a Millennium Falcon-inspired bed and licensed linens. And Disney added to the already massive hype surrounding the film and its merchandise with a global unboxing event on YouTube on Thursday that starred Maker Studios' influencers like EvanTubeHD and Chris Pirillo.

The big question will be whether Disney, toy-makers such as Hasbro and retailers like Toys R Us and Target can keep the momentum going over the next three months. The film debuts December 18, which gives retailers an opportunity to carefully plan promotions and inventory around the holiday season.

"There are a lot of people with a lot invested here," said Mr. O'Shea, who has spent the last 13 years researching toys and retail at Moody's. "I don't recall seeing something promoted as heavily as this that will need legs this long since I've been here."