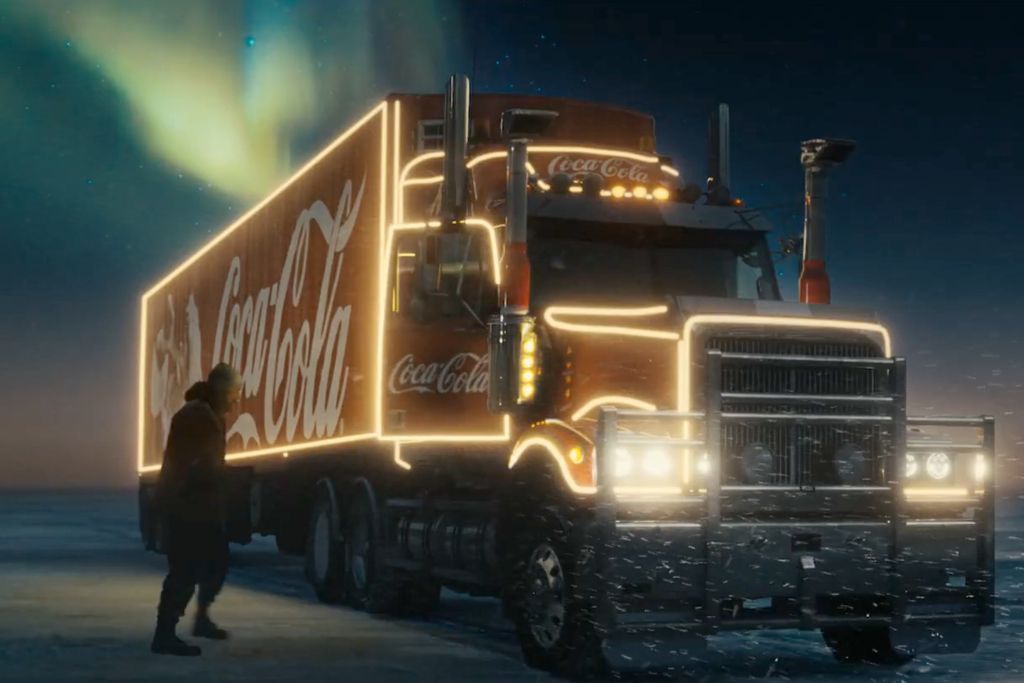 Spoiler alert: In Coke's version of Christmas, Santa Claus doesn't steer a sleigh—instead he captains a soda delivery truck. The jolly one is seen behind a Coke-branded big rig in the climactic scene of the marketer’s global holiday ad, which portrays the epic journey of a father going to extremes to deliver his daughter’s letter to Santa in the North Pole.

The big-budget ad from Wieden+Kennedy London (watch below) was directed by Taika Waititi, the New Zealand filmmaker best-known for 2019 Oscar best picture nominee “JoJo Rabbit.” The spot, which will air in 90 countries including the U.S., represents a major investment for Coca-Cola Co., which had dialed back its marketing earlier this year in the wake of the coronavirus, after the pandemic hampered sales at restaurants and sports venues.

While the company has been more selective with its marketing this year, the holiday campaign shows that it wants to continue to own Christmas, which it has been advertising around for 100 years. Pepsi—which has not done much holiday marketing over the years—made a move last year to grab some of Coke’s Christmas turf with a campaign starring Cardi B.

Pepsi has not yet foreshadowed if it will engage again this year. But Coke is going all-in. Globally, the campaign includes Santa imagery on packaging and out-of-home buys. In the U.S., the brand will swap in polar bears for Santa Claus on packaging and in outdoor media.

The TV ad will get “marquis media slots throughout the holiday season” in the U.S., according to a spokeswoman, including during National Football League games, which are the most expensive buys on TV.

Th ad shows a father leaving for work (on a coastal wind farm) as his daughter hands him a letter to mail to Santa. While at work he realizes he forgot to mail the letter, setting him off on a mission that takes him through seas, cliffs, jungles and tundras before he gets to the North Pole. It appears Santa has already left, until he shows up driving a Coke truck decorated for the holidays—and he eventually gives the dad the letter back, which reads, “Please bring daddy home for Christmas.”

The choice to show Santa in a Coke truck, rather than his traditional sleigh, risks being seen as a bit too commercial and self-promoting. But a global Coke representative defended the choice in an email, saying that “as a brand, Coca-Cola is synonymous with Christmas, dating back to [the] 1920s when Santa graced our onscreen ad.” She referenced Coke’s 100-year tradition of Christmas ads and said “it felt only appropriate” that this year’s campaign be “steeped in this heritage.”

Indeed, if any brand has a right to mix its own branding with Santa, it is Coke. The brand is widely credited with popularizing the modern-day interpretation of Santa Claus—a big jolly man in a red suit—that was first created for the brand in 1931 by artist Haddon Sundblom. The polar bears have been part of Coca-Cola's repertoire since first appearing in a print ad in France in 1922.

Festive Coke trucks adorned with lights are also a part of the brand’s holiday tradition—the brand typically installs them in cities around the world as part of a holiday sampling effort. But Coke axed the truck tours this year as result of health concerns related to COVID.

COVID has also complicated big-production ad shoots for a range of marketers, which must deal with social-distancing regulations. Coke shot its ad in August in Waititi’s home country of New Zealand, which has been widely praised for controlling the pandemic. Coke was able to avoid any international travel for the production, relying on locally based crew and talent, with others involved in the ad using Zoom to stay in touch remotely.