Employment in advertising, public relations and related services tumbled by 36,400 jobs in April as the ad industry plunged into a deep recession.

Ad agencies are cutting staff as they ratchet down into a COVID-induced recession, and history suggests it will be a long slog to bring agency employment back to recent heights.

U.S. ad agency employment tends to peak earlier than the overall U.S. job market in the waning days of a business cycle’s economic expansion before a recession, according to Ad Age Datacenter’s analysis of jobs stats for the past 30 years. Agencies make deep job cuts during downturns. And agency jobs typically are late to recover as the economy rebounds.

The depth of damage to agency staffing in the current downturn is to be determined. But the outlook is dim.

Agencies, which face growing challenges from major consultancies such as Accenture Interactive and competition from in-house agencies, enter this downturn in a weakened state; 2019 was the weakest year for agency growth since the Great Recession. 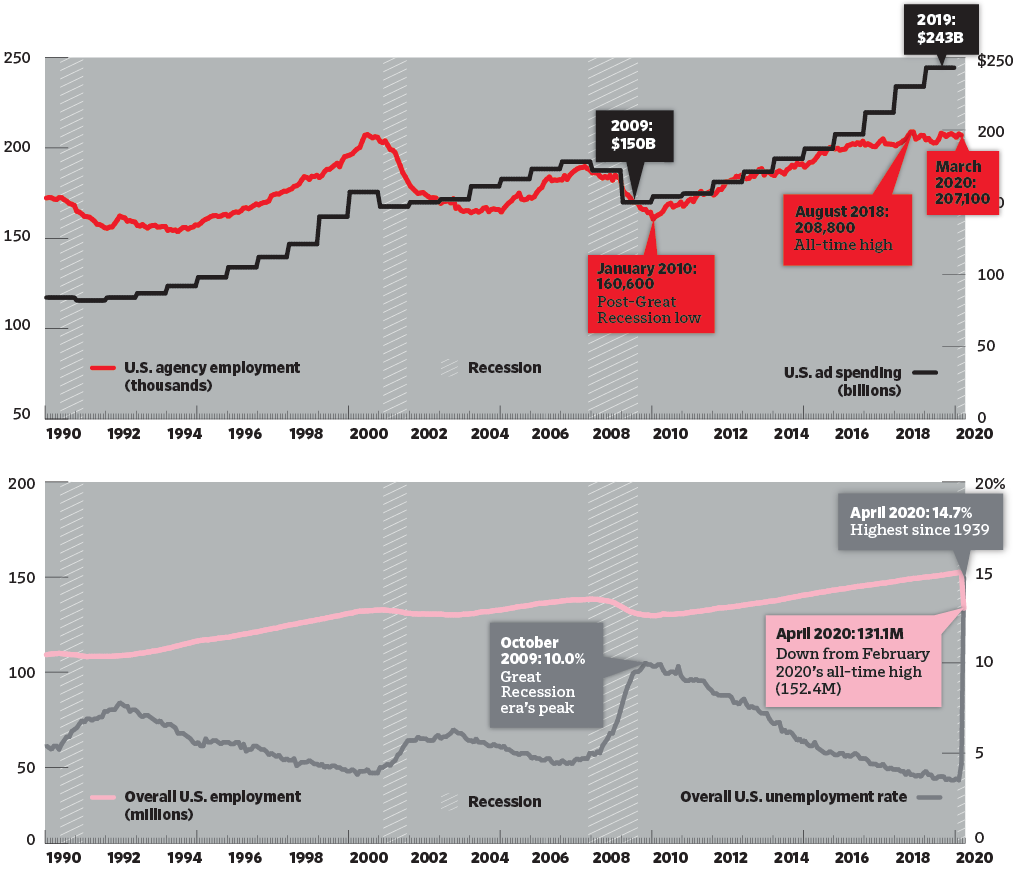 The overall U.S. unemployment rate surged from 4.4 percent in March to 14.7 percent in April, the highest rate since 1939.

The nation last month lost a record 20.5 million jobs—more than one out of eight jobs­—as the economy shut down amid the coronavirus pandemic, according to Bureau of Labor Statistics figures released May 8.

Ad agency staffing held at 207,100 in March, unchanged from February. U.S. ad agency employment reached an all-time high of 208,800 in August 2018, a year-and-a-half before this recession began. (It may be months before the recession is formally called by the National Bureau of Economic Research, but it appears a contraction began in February or March 2020.)

We won’t know official ad agency April staffing for another month. But that number is likely to be bad—as foretold by an unending stream of recent layoff stories on AdAge.com.

Employment in advertising, public relations and related services tumbled 7.5 percent in April to 451,100 jobs, a stunning loss of 36,400 jobs.

Overall U.S. employment generally peaks at or near the start of recessions.

Ad agency staffing, in contrast, typically peaks before recessions, making agencies something of a leading indicator.

Labor is the biggest cost for agencies—salaries and related expenses last year were 64.6 percent of net revenue at Interpublic Group of Cos.—and agencies are quick to cut staffing when they lose business or when clients reduce spending. (Not coincidentally, cutting ad spending is an easy—if not always defensible—move for marketers when sales weaken and profits slump in a downturn.)

On the flip side, agencies are cautious about adding employees as the economy recovers, resulting in a lag in staffing growth post-recession.

The early peak/hard fall/late recovery pattern is evident in recessions, according to Ad Age’s analysis of BLS recession-period jobs figures back to 1990.

In the 1990-1991 recession, agency employment peaked five months before the start of the recession and didn’t hit bottom until 38 months after the economic recovery began. Agency employment fell 11.1 percent from that peak to bottom, vs. only a 1.5 percent drop for overall U.S. employment from top to bottom.

In the 2001 downturn, agency staffing peaked (in the irrational ad exuberance of the dot-com bubble) seven months before the recession began and bottomed out 26 months after the recession ended. Agency employment plunged 20.8 percent from peak to bottom, vs. a 2.0 percent decline for U.S. employment.

Fear of ChatGPT, plus the top 5 video creators for younger audiences: Datacenter Weekly