Amazon last year spent about $21,000 per minute on ads and promotion, and it's now the nation's biggest advertiser. Ad Age analyzes its ad spending over the past 25 years
READ THIS NEXT
Fear of ChatGPT, plus the top 5 video creators for younger audiences: Datacenter Weekly
Credit: Thomas Samson/AFP/Getty Images via Bloomberg

Earth’s Biggest Bookstore is in a prime position to be Earth’s biggest advertiser.

Amazon rocketed its worldwide spending on advertising and other promotional costs 34 percent to $11 billion in 2019, giving P&G a run for the money.

P&G’s spending grew in its fiscal year ended June 2020 (the period that Ad Age will use for P&G in the upcoming global rankings), but the marketer’s final spending tally isn’t clear yet since it won’t reveal financial results until July 30. P&G spent an estimated $10.1 billion on advertising plus other marketing costs in the year ended June 2019. 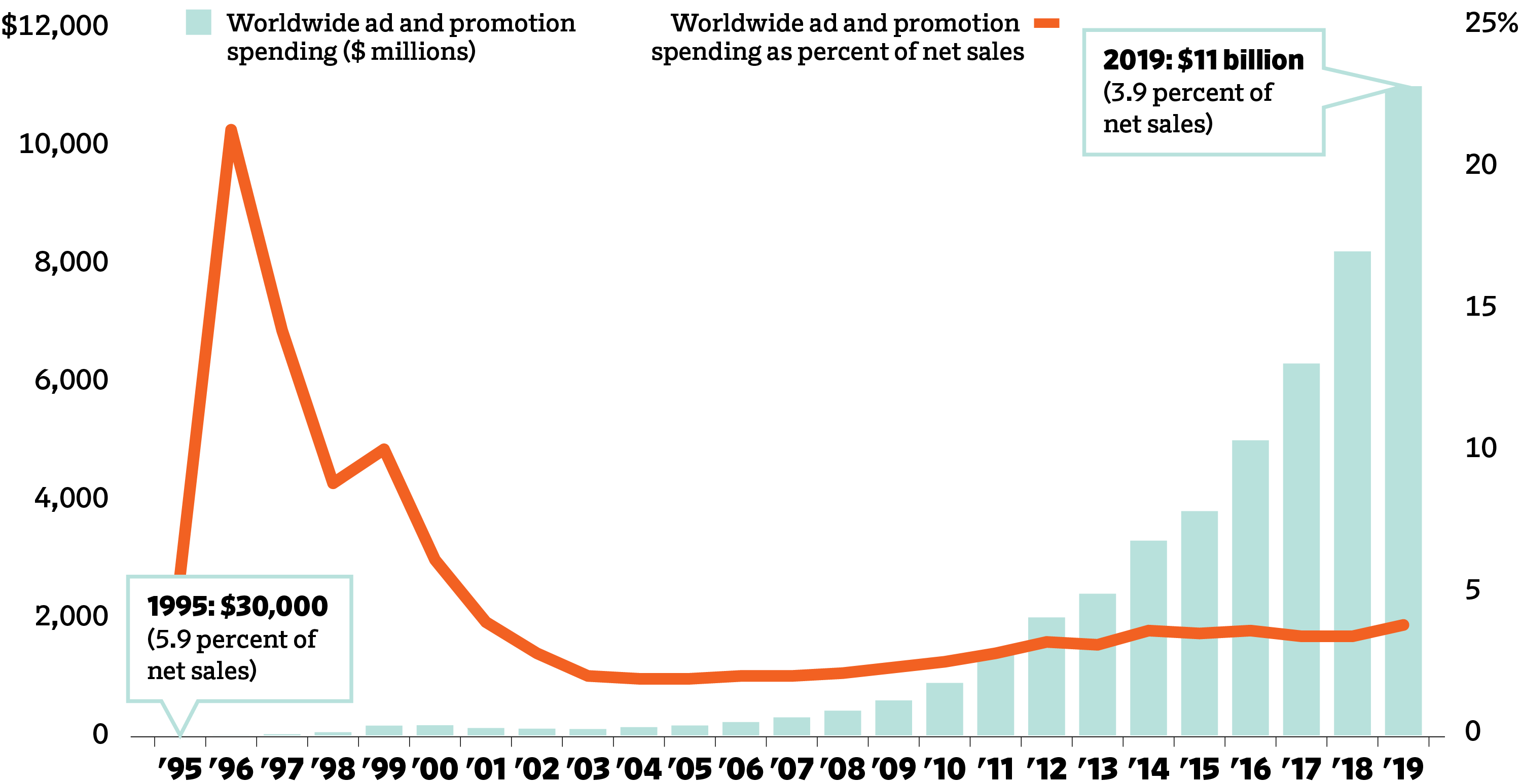 Amazon, which now seeks to be “Earth’s most customer-centric company,” last year spent about $21,000 per minute on advertising and promotion.

Amazon first appeared in the Ad Age Leading National Advertisers report a decade ago, ranking No. 70 based on 2010 U.S. spending.

Amazon last year pumped 3.9 percent of its $281 billion in net sales into advertising and promotion. That was Amazon’s highest ad-and-promotion share of sales since 2001.

The company’s net sales have grown every year since Amazon opened for business.

Amazon’s worldwide ad and promotion spending has increased every year except for 2001, 2002 and 2003, according to Ad Age Datacenter’s analysis.

That period early in the millennium included fallout from the dot-com bubble, when Amazon’s stock tumbled, sales growth slowed and the retailer slashed spending on marketing, advertising and promotion. During that period, Amazon settled on a new winning strategy: Free shipping.

"In January 2002, we introduced a new shipping option … offering everyday free shipping for certain orders that exceed a specified amount. … Although marketing expenses do not include our free and reduced shipping offers, we view such offers as an effective marketing tool.”

The company built on that strategy in February 2005 with the launch of Amazon Prime, a membership program offering free two-day shipping with no minimum purchase requirement.

When Amazon unveiled Prime, CEO Jeff Bezos said it would be “expensive for the company in the short-term” but a benefit to customers because express shipping would become “an everyday experience rather than an occasional indulgence.”

It worked out OK. The stock traded below $42 when Amazon Prime launched. The stock July 13 reached an all-time high above $3,300 (more than double its COVID-19 pandemic low point in March), and Bezos is now the richest person on Earth.

The company continues to rely on free shipping and other benefits of Amazon Prime as extensions of marketing. Amazon’s first-quarter regulatory filing noted: “While costs associated with Amazon Prime memberships and other shipping offers are not included in marketing expense, we view these offers as effective worldwide marketing tools, and intend to continue offering them indefinitely.”

Download the Ad Age Leading National Advertisers 2020 Fact Pack to get quick stats on ad spending for the biggest marketers and brands.
AdAge.com/lna2020factpack

© Copyright 2020 Crain Communications Inc. The data and information presented is the property of Crain and others and is protected by copyright and other intellectual property laws. For personal, noncommercial use only, which must be in accordance with Ad Age’s Terms and Conditions at AdAge.com/terms. Archiving, reproduction, redistribution or other uses are prohibited.

Fear of ChatGPT, plus the top 5 video creators for younger audiences: Datacenter Weekly