NEW YORK (AdAge.com) -- With the recent focus on Hispanic-targeted media and entertainment, one arena has remained largely untapped: video games. But that's about to change as "Lucha Libre AAA 2011: Heroes del Ring," a Mexican wrestling game from upstart publisher Slang, prepares to enter the ring next month. 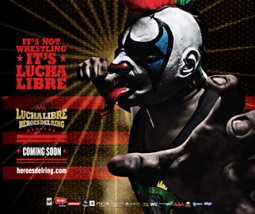 "Heroes del Ring" is the largest video-game project to be conceived and created entirely in Latin America, and Slang is the first Mexican publisher of video games for the Xbox, PlayStation (PS3, Play Station Portable PSP), Wii and Nintendo DS consoles. Only 2% of characters in current video games are Hispanic, according to executives at the Vox Collective, the New York-based independent shop handling advertising for "Heroes," so this launch is a "cultural milestone," said Roberto Ramos, CEO and president of the Vox Collective.

Lucha libre is a centuries-old form of wrestling in Mexico characterized by fast-paced, high-flying moves and, of course, the colorful masks that define each luchador. "It's wrestling meets Halloween, meets circus, meets day of the dead," said Susan Jaramillo, chief creative officer and partner at the Vox Collective. Now, the question is, "Can Americans look past their campy perceptions of Mexican wrestling to see how scary it can really be?" said Ms. Jaramillo.

In order to get audiences excited about the sport, Vox has created three trailers in both Spanish and English that each tackle various aspects of the game: the storytelling element of lucha libre, the characteristics of the sport and the gamer's experience. Thirty-second spots will air on cable channels such as ESPN, SyFy, MTV, MTV2 and G4 starting next week, as well as on Hispanic media outlets.

There will be also be a print element, but as the target audience is young, male gamers, according to Vox executives, the focus will be on reaching them online. Advertising for "Los Heroes" will appear on lifestyle and gaming sites, and will include integration with online shows such as weekly tech-culture program "Diggnation" on web video site Revision 3. Online trailers will be up to two minutes in length and are like "short horror films," said Andres Cortes, creative director and partner at Vox, and director of the trailers.

The trailers start with scarily-painted lucha libre fighters preparing to charge into the ring and end with the words "It's not wrestling. It's lucha libre." Spanish-language ads use phrases like "Hacer sufrir es un arte" ("To cause suffering is an art").

The darkness of lucha Libre is what sets it apart from the WWE wrestling Americans are used to, and the creative team at Vox is banking on that supernatural element of lucha to set "Heroes" apart from other games on the market. In Mexico, the luchadores are "heroes from the underworld -- a nasty, crazy world that they leave only to fight," said Mr. Cortes.

The game includes 30 of the most popular fighters in lucha libre and voiceovers from Arturo "El Rudo" Rivera and Alfonso "El Doctor" Morales, both commentators on Latin American sports channel Televisa Deportes. Luchadores such as El Elegido ("The Chosen One") and La Parka contributed their own creative input to "Los Heroes" to make it feel more authentic. Gamers are also encouraged to build their own wrestlers, and customizing their fighters with everything from masks to tattoos can take up to 45 minutes.

According to Mr. Ramos, the lucha game is "the next generation of storytelling." Because of the legacy element to the sport, advertising in Latin America (the game will also be sold in Mexico and several countries in South America, in addition to the U.S.) will focus more on tradition.

But while the game certainly has a deep cultural aspect, Ms. Jaramillo strongly believes in its crossover power. "Salsa outsells ketchup," she said. "Lucha libre can outsell wrestling. It's wrestling with flavor."

As for how it plans to tackle its competitors, Ms. Jaramillo said, "WWE advertising is stuck in the '80s. We're dark, edgy -- we're Quentin Tarantino, Robert Rodriguez."

With plans to sell at a premium price point of $59.99 on the Xbox and PS3, and $39.99 on Wii, "Heroes del Ring" still has a long fight ahead to make a name for itself in the video-game world before its Oct. 12 launch (pre-sales have already begun).

No matter the outcome, the release of a Hispanic-focused video game is still groundbreaking, said Federico Beyer, director at Slang. "In my nine-year career, I have never seen anyone post anything in Spanish on a gaming forum," said Mr. Beyer. "Except once in a while, you'll see someone say Viva Madden."