Sergio Alcocer, president and chief creative officer of LatinWorks, is leaving the Austin-based U.S. Hispanic agency at the end of this week after more than 16 years. Mr. Alcocer, one of the best-known Hispanic creatives, has been a major force behind making LatinWorks one of the biggest and most creative agencies in the Hispanic market. 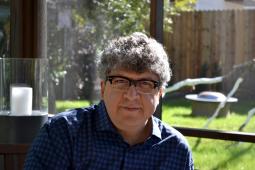 "It's been wonderful, wonderful, wonderful, but I think it's time for me to venture into other things," said Mr. Alcocer. He said he'll take the next couple months off and then finalize plans for his next move in early 2016. "100% the ad industry is my passion. These are exciting times to be in advertising."

Mr. Alcocer joined LatinWorks in 1999, shortly after co-founders Manny Flores and Alejandro Ruelas, the agency's CEO and CMO, started LatinWorks in a basement in St. Louis, Missouri, the city where both had worked on the client side at Anheuser-Busch. The agency is minority owned by Omnicom Group.

He's been behind creative that sweeps award shows, like the long-running Cine Las Americas campaign for a Latin American film festival, and brand-building work for major marketers, and has been a judge twice at the Cannes Lions International Festival of Creativity. Under his creative leadership, LatinWorks has been named to Ad Age's Agency A-List of the best U.S. agencies and has been Ad Age's Multicultural Agency of the Year more than once.

Mr. Ruelas said that Thursday will be a day of celebration in honor of Mr. Alcocer's many contributions, including a lunch where Mr. Alcocer will speak to the whole agency.

"For many years Sergio embodied the spirit of what LatinWorks was all about," Mr. Ruelas said. "He is a very powerful personality that people drew a lot of inspiration from. Sergio will always be unique, and he meant the world to LatinWorks and we're just happy he has the chance to do the things he wants to explore."

Mr. Flores said that after celebrating Mr. Alcocer tomorrow, and Halloween on Friday, the agency will start addressing organizational changes next week and "how we see the LatinWorks brand." Mr. Alcocer's successor is expected to be promoted from within the agency.

"We won't have a 250-pound, 6'4" guy walking the halls," Mr. Flores said. "His towering presence will be missed." Mr. Alcocer's office, he said, might be turned into a lounge where creatives can go for inspiration.