He's been called the father of the funny commercial and a creative genius who was able to craft TV spots that everyone remembers. 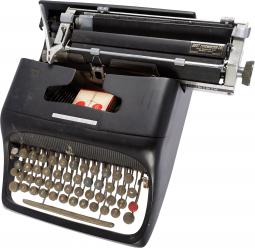 If you grew up in his time, Stan Freberg's commercials are likely to be etched in your memory -- including Sunsweet prunes ("Today the pits, tomorrow the wrinkles!") and Contadina tomato paste ("Who put eight great tomatoes in that little bitty can?").

Although the funnyman passed away in 2015 at the age of 88, fans now have the chance to bid on some of Mr. Freberg's memorabilia at auction. Heritage Auctions will host the event at its Beverly Hills, Calif. location, but bids can be made online on its website. The event will begin at 9 a.m. Pacific on Dec. 10.

The most noteworthy artifacts include manuscripts from from the 1961 comedy album "Stan Freberg Presents the United States of America" and the 1958 comedy single "Green Christmas"; his Hollywood Walk of Fame award from 1960; and his prized Olivetti-Underwood typewriter.

Mr. Freberg used the typewriter in the 1950s and 1960s to write commercials, comedy routines and radio scripts.

"One of the things that most people don't realize is that his index fingers on both hands were bent over from all the years of hitting the keys so hard," said Ms. Freberg. "For the most part he did picking with two fingers -- it's how fast his brain was moving."

Apart from these items, Mr. Freberg had a large collection of memorabilia representing different parts of his career. "People need to realize that Stan Freberg kept everything," Ms. Freberg said, noting that he "always had a million stories, and his stories always had back stories."

Obtaining some of Mr. Freberg's artifacts is a unique opportunity to gain insights into a great creative thinker, said Jim Lentz, director of animation art at Heritage Auctions. "Having access to this guy's mind through this collection is pretty fantastic."