Ad Age's new white paper examines innovation in the worst of times, from the 1930s to the present
READ THIS NEXT
How brands are reacting to the politicization of COVID
Credit: iStock 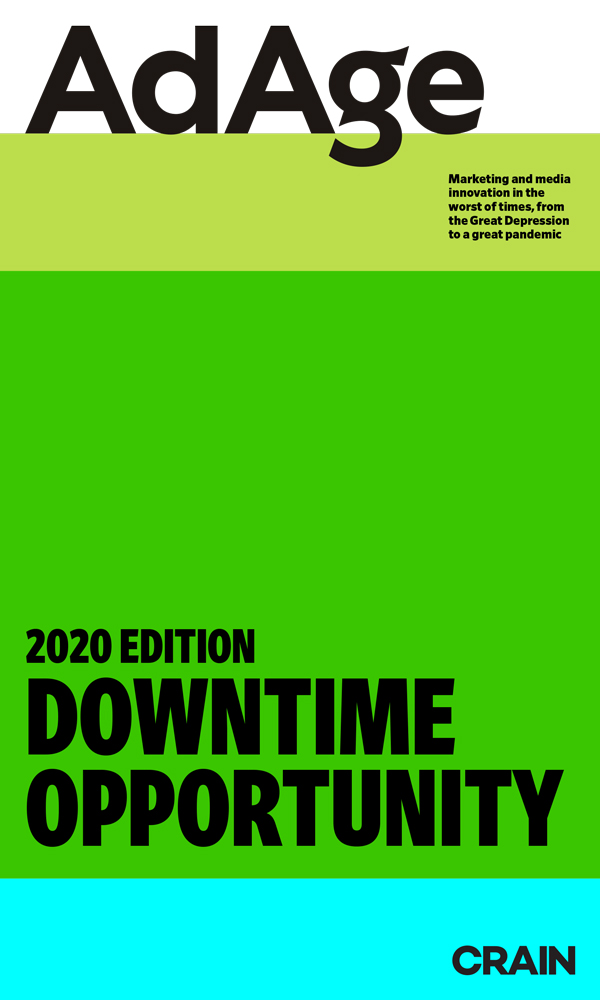 The last time a presidential election took place in the middle of a catastrophic recession, Bradley Johnson, Ad Age's director of data analytics, writes in his comprehensive white paper "Downtime Opportunity: 2020 Edition," both of the major party candidates described the period in identical, chilling words: “the worst financial crisis since the Great Depression.”

In retrospect, 2020 can only scoff at 2008's relative simplicity. The Great Recession of December 2007 through June 2009 decimated financial institutions like Washington Mutual and Lehman Brothers and nearly destroyed the American auto industry. Just as the stock market crash of 1929 had helped elect Franklin D. Roosevelt to the presidency, so did the Great Recession ultimately tilt the 2008 election to Barack Obama.

While the current recession has also been compared to the Depression, it is not forecast to last nearly as long as either that downturn or the 2007-2009 recession because the primary cause is the economic shutdown due to COVID-19. But less than one week before Election Day—with the U.S. death count at more than 229,000 from the virus and the country entering a third wave that threatens to be a tsunami—that very pandemic has some analysts comparing the current era not just to the worst financial crises in memory, but to historical calamities like World War II.

On the sociopolitical front, since the police killing of George Floyd reinvigorated the Black Lives Matter movement, the country has been rocked by social justice protests and violence against protesters by either the authorities or counterprotesters, some of whom are aligned with right-wing groups in a time when Homeland Security has identified white supremacist organizations as the greatest domestic terror threat to our public safety. Adding to the nonstop chaos, the incumbent president's political rallies have effectively become COVID superspreader events.

This is the Covey Spreader. Nasty. pic.twitter.com/BzcrBmBKCv

All of this is the backdrop for perhaps the most contentious and consequential presidential election in our lifetimes.

But, as Johnson writes in "Downtime Opportunity," an update on a report Ad Age originally published in 2008, "we have seen this before." The white paper offers an optimistic view of the opportunities that unfold in the toughest times. It is available for purchase and download at AdAge.com/downtime2020. (The report is free for Ad Age Insider members and Ad Age Datacenter subscribers.)

In “Downtime Opportunity,” Ad Age examines innovation in the economic recessions from the 1930s to the present. What happened to marketers, media and agencies during past downturns? There were layoffs, closings and cutbacks—to be sure. But every deep recession also saw great innovation with new companies, products, services and technology.

Although the last presidential election to occur during a recession was only 12 years ago—or what feels like 12 lifetimes ago—Joe Biden being on the ballot isn't the only similarity between then and now. There are fascinating comparisons, particularly when considering the technological and media innovations and innovators from 2008 and how their outsize influence has impacted the politics and culture of 2020.

Heading into 2008, Netflix was primarily known as a DVD mailing service whose main competitor was the Blockbuster video chain. In January 2008, Netflix offered its unlimited streaming video service to subscribers. Hulu launched its website in March of that year, and two months later Roku debuted its first TV streaming device in partnership with Netflix. In September 2008, the forerunner of Amazon Prime Video was renamed Amazon Video on Demand. The streaming wars had begun.

Even before 2020 began, streaming was all the rage: Disney+ and Apple TV+ both launched in November 2019, and HBO Max and NBCUniversal's Peacock were set to debut this year. But once the pandemic hit, with so many consumers stuck at home and other options for leisure and entertainment temporarily shut down, streaming video became more dominant: About 3.5 million people cut the cord with their TV provider in the first half of the year, according to Bloomberg Intelligence, while eMarketer predicted that more than half of all U.S. households will do so by 2024.

Not all streaming services have been able to cash in. The highest-profile failure was Quibi, which crashed and burned in six months after raising $1.75 billion for its launch.

Car buying has also slowed during the pandemic, but it didn’t stop. With many dealerships closed, more selling moved online: General Motors promoted its “Shop. Click. Drive.” program, though consumers still must buy the vehicle through a dealership rather than directly from the manufacturer. AutoNation, the biggest U.S. dealership group based on new-vehicle sales, has expanded its digital capabilities this year to cater to online shoppers.

During the Great Recession, the bankruptcy of General Motors and the government bailout to save the company and the U.S. auto industry in general got most of the headlines. But in early 2008, Tesla, a company founded by PayPal Co-Founder Elon Musk in 2003, delivered its first electric car. The government’s massive 2008 and 2009 economic recovery packages included rebates of up to $7,500 on electric cars, making it a bit easier for Tesla’s affluent customers to get behind the wheel of a $109,000 Roadster. Tesla also borrowed $465 million in 2010 from the Department of Energy to help build a factory. Flash forward to July 2020, when Tesla eclipsed Toyota Motor Corp. to become the world’s most valuable automaker based on stock value.

The new gatekeepers behind walled gardens

Although some major media outlets have rallied during the hyperactive news cycle of the past four years, print has continued to struggle. In the first half of 2020, according to research from Kantar, ad spending for magazines decreased from $6.1 billion in 2019 to $4.6 billion this year (-24.6%) and for newspapers from $3.7 billion in 2019 to $2.4 billion (-36.3%).

In 2008, Facebook (founded in 2004) still trailed MySpace as the leading social network. But in March of that year, CEO Mark Zuckerberg announced a consequential hire: Sheryl Sandberg, a Google veteran, as chief operating officer. By the end of the recession, Facebook was No. 1. As of June 2020, the company reported a record 3.1 billion users across its Facebook, Instagram, Messenger and WhatsApp services.

The presidential election of 2016 cemented tech giants like Facebook, Google, Apple and Twitter as the new digital town square, with one extremely important exception: They do not view themselves as traditional publishers, and so claim no responsibility—or blame—for the information or misinformation that users share on their platforms. According to digital security experts and U.S. intelligence agencies, this hands-off policy had dire consequences for the 2016 election and continues to threaten 2020's.

In this heavily politicized environment, Facebook, Google and Twitter have gotten so powerful that every move they make will likely be heavily scrutinized as biased against either the right or the left. So much so that the CEOs of the companies are routinely called to answer for their actions before Congress, as Zuckerberg, Google's Sundar Pichai and Twitter's Jack Dorsey last Wednesday.

But when the story of 2020 is told, another social platform may ultimately be the one that defines this year and the years to come. Not long after being introduced to the U.S., TikTok has begun to dominate the disparate worlds of politics, marketing and pop culture.

Comedian Sarah Cooper became one of the first TikTok stars to rise to prominence during the pandemic with her devastatingly mocking lip-sync videos of Donald Trump's most incoherent utterances. Perhaps not coincidentally, the social video sharing app, which is owned by the Chinese firm ByteDance, has been called out as a threat to our national security by Trump as well as to our democratic values by Zuckerberg.

While the Trump administration's attempts to ban the app and to compel ByteDance to sell the company have been held up in the courts, TikTok has continued to grab the attention of marketers, consumers and regular users. The service's impact on the music industry has been well documented, from breaking Lil Nas X's "Old Town Road" to sending Fleetwood Mac's "Dreams" to the top of the charts 43 years after its original release—and also generating invaluable free media for Ocean Spray cranberry juice.

Brands and influencers have flocked to the service. In response to the pandemic, Dettol, an Indian company that sells disinfectant sprays and wipes, and hand sanitizers, created a #HandWashChallenge that received nearly 9 billion views in four days.

Most recently, the company moved into e-commerce when it announced a partnership with Shopify.