Will Apple’s privacy moves help it join the triopoly?
READ THIS NEXT
Pro bono work—why a recession is the perfect time for agencies to invest
Credit: iStock

With 2023 on the horizon, industry executives are trying to drive end-of-year revenue or solidify how they begin the new year. As a 15-year veteran of this industry on a global level, with mobile at the forefront, here is my take.

On the most macro of issues, the industry is finally deciphering the full impact of Apple’s ongoing consumer privacy measures. Will the App Tracking Transparency framework and SKAdNetwork 4.0, which was just released, have the potential to help Apple join the triopoly? Appsumer’s benchmark report suggests that Apple’s search ad business profited from its own privacy measures, giving Apple the momentum it needs ahead of the rumored launch of its own demand-side platform.

The privacy restrictions that were put in place more than a year ago, designed for consumer welfare and value exchange, will likely do more to help big tech consolidate control. Here are other predictions for 2023:

Free markets will be seriously tested in the coming year. Like Facebook, TikTok occupies a similar space in the collective consumer mind. It’s fun, interactive and prioritizes people-first connections. The potential of a video “going viral” attracts users every day. But under the surface and behind the algorithms lie concerns over misinformation, content and user suppression and privacy.

In terms of suppression, more users are raising red flags over which topics, keywords, phrases and user profiles face censorship. Across the platform, it has become good practice to add disclaimers and skip or reshape certain key words or phrases that might trigger the app’s censors and cause creators or videos to go under review or be removed from the “For You Page.”

TikTok also has been accused of collecting, leveraging and selling location data and in-app clicks via the company’s trackers. According to one recent report, TikTok trackers have been adopted by many major publishers and content providers, collecting IP addresses, unique ID numbers, logged clicks, typed input and search data. As these stories unfold, we are likely to see increased government, regulatory and public scrutiny of the platform in the coming year.

Identity and addressability will continue to be trendy in 2023

Some of the changes coming in 2023 are natural outcomes within the ad tech ecosystem based on external factors, including a recessionary economy, Apple’s privacy frameworks for iOS, and Google’s imminent deprecation of third-party cookies among others.

The industry has dragged its feet on the cookieless future, and the general response to Google’s Privacy Sandbox has been tepid. It is highly possible that Google will further delay cookie deprecation to 2025 to allow for revenue continuity. At this rate, Privacy Sandbox for Android, which receives more positive reception and less friction, may be implemented in the market ahead of third-party cookie deprecation in Chrome.

Seller-defined audiences on the rise

The pendulum is swinging yet again to publishers with greater adoption of seller-defined audiences (SDAs), for which they segment first-party audience data into relevant cohorts. This is due to the anticipated disappearance of device IDs and buy-side audiences losing scale as signals go away. As a result, unified publisher SDAs will sour. At the same time, more independent SDA-focused companies that don’t have their own software development kit distribution will be challenged.

We are likely to see even more data monopolies in the app world as the open web becomes significantly more gated in 2023, with companies trying to replicate first-party data whenever they can. There will be more requirements to log in and more apps will offer user incentives and rewards.

A new wave of surfaces will evolve the consumer experience

Smartphones are just beginning to be truly smart—with technology and user behavior aligning. However, the process of being informed and entertained has become more daunting. The discovery journey takes far too many clicks, and some are not the greatest experience for consumers. There is going to be a battle for mobile screens as consumers are given the technology and creative means to control their own screen experience.

The surface economy will obviate wasted screen time and the current search or download app process will evolve to have more pre-loaded opt-in phone experiences designed to make it fast and easy to access the internet. Apple kicked off this trend with iOS 16 and we will see the lock screen as the first touchpoint for consumers.

At the end of the day, respecting consumer privacy has been the right thing to do in order to advance innovation and further enrich our mobile lives. It is on all of us to develop responsible technologies that positively impact people, businesses and societies around the world. 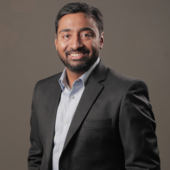 Abhay Singhal is co-founder of InMobi and CEO of InMobi Ads.