Positive experiences and emotional connections will help girls reengage
READ THIS NEXT
Toxic celebrity partnerships—what brands should do when they turn ugly
Credit: iStock

I remember the moment I was hooked on “Game of Thrones.” Instead of fast-forwarding through the titles, I eagerly waited to see which part of the show’s 3D map would be animated, indicating where the action would take place that week.

This is how powerful opening credits can be. Viewers still talk about the title sequence with reverence—an outcome sports programs must seek to achieve, particularly if they are ever going to appeal to a more diverse audience.

Luring new fans is critical to any program’s success, but with sports it has wider importance. A recent survey showed that more than 1 million girls in the U.K. lose interest in sports as teenagers, despite seeing themselves as sport-minded in younger years. The survey found that self-confidence and body image drive this problem. How many girls around the world feel the same?

Positive experiences and emotional connections with sport, the authors argued, would help girls reengage. This is where broadcasters come in. If they can reach them, those girls might not feel so intimidated by or excluded from sports. The impact will be huge.

Sports title sequences usually follow a tired formula: montages of the big stars in action, maybe a few shots of teams heading to the pitch, perhaps some footage of previous games. This is all well and good for existing fans but does nothing to entice new ones.

The first place to look for inspiration is scripted television. Since the advent of streaming services, there’s now a desperate need to grab viewers’ attention—particularly if you want to stop people from pressing the “skip intro” button.

Programs seem less premium without an arresting title sequence. Think “Mad Men’s” falling man animation or Tony Soprano as he drives into New Jersey in the opening credits of “The Sopranos.” If those crucial moments aren’t high quality, why would you carry on watching?

The best title sequences weave a narrative into moments. Their visuals and audio enhance each other. They seamlessly carry the viewer into the program. They don’t have to be long—some of the best are sharp and short, such as “Killing Eve”—but have to work with what comes next.

As videos become the focus of social media, truly great sequences will be shared. If that first 30 seconds shows craft, if it is beautiful to watch, then viewers might actually watch the whole program. Here are 5 ways to make title sequences more engaging to new fans:

Use authentic visuals and media

Sports title sequences need to be more creative with their montages and star player shots. If a viewer hasn’t watched the program or game before, that’s not going to resonate with them. They need a more modern approach.

Sports programs can learn from a number of innovative brands that have successfully captured the attention of Gen Z. This generation is widely—but not exclusively—known for appreciating more authentic visuals and media, rather than glossy and perfect. Take Glossier, the make-up brand that won legions of fans from its minimalistic looks, rather than relying on imagery that shouted glitz and glamour. A rough-and-ready approach adds a sense of realism that makes content accessible to a wider audience.

Nike has gone the extra mile here, creating imagery and campaigns that feel visceral or even controversial. Its 2019 “Dream Crazier” ad shone a light on female stars who have broken barriers, including women athletes who compete in less well-known sports.

Sports program opening credits could shine light on newer talent, rather than focusing on stars—particularly as female sports stars are generally less well-known. Even if you can’t highlight women in the opening credits because none are involved in the game being played, a sports title sequence can still be inclusive.

Include shots of diverse fans. Nike recently partnered with The GenderCool Project to create an advert that features 11 transgender and nonbinary teens sharing their love of team sports, as anti-trans legislation continues to spread across the U.S.

Title sequences like Mad Men and The Morning Show, with their use of simple shapes and characterful graphics to execute an intricate narrative, show how useful animation can be. Visuals and style are important. You can even enhance live-action shots with illustrations and visual effects—particularly if sports programs are looking to break out and do something more creative.

Everyone—male or female, young or old—can appreciate something that looks good.

If sports programs can do all this, they will not only increase their viewership but sell themselves to young girls who increasingly feel that sports aren’t for them as they get older.

Young girls must be encouraged to see themselves in sports. It’s time for programmers to be brave. 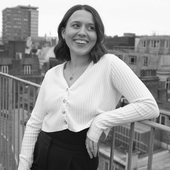 How Netflix and Disney+ can fix ad-supported streaming