Inside Barton F. Graf: 'We did everything right... so why did it go wrong?' | Ad Age
Skip to main content
Sign In Register

Inside Barton F. Graf: 'We did everything right... so why did it go wrong?'

None of us at Barton F. Graf knew that the agency was going to shut down. Well, Gerry Graf probably knew, but the rest of us didn’t know until a few weeks before the rest of the world did.

We knew that things weren’t great and that we’d had layoffs and that we needed to win some new business. But did any of us think that we'd be closing in 2019? No. And I have a theory why. Because if we had known, somehow, subconsciously, we’d have started making "safe" work. Work that we thought the client would want to buy, rather than work we knew they should buy. We’d have started second-guessing our ideas and our scripts and our strategy. And if we'd done that, there’d have been nothing "Barton" about the work. So why were we even doing it?

Back in May, with the agency’s future on the line, in the final round of a new business pitch that could possibly have saved the agency, one of our hail-mary scripts featured Benicio Del Toro lying naked with 3,462 pins on his back; in another, he was dressed as a cactus, making “beep” sounds with his mouth.

Were the scripts safe? No. Were they funny? We think so. Did they say everything the client wanted to say in the first 10 seconds and then again on the end card? Hell yes. It was the sort of work that Barton F. Graf was built on and that has made so many of our clients famous. We lost the pitch.

Over this past week, there have been a lot of theories about why Barton is closing: the death of the indie agency, the traditional AOR model vs. project-based work, holding companies, internal client agencies, etc, etc. These theories sound intelligent and there’s probably some truth to all of them. But that’s not what bothers me. I’m conflicted with a simpler question: If we'd had the chance, what could we have done differently? Sure, there may have been a few missteps, but were any of those big enough to bring down an agency?

We are still getting 20 million views on our Supercell videos. Little Caesars is the country’s No. 1 selling pizza brand. And we just splattered a whole bunch of people with grape pulp for Welch’s. So, the only conclusion I can come up with is that in advertising it’s not just about the work anymore. This may sound incredibly naive, and as a creative director I should know better, but that’s the one luxury Barton afforded you. You could really believe that all that mattered was the work. I’ve had that feeling for the entire time I’ve been here. Some lucky others have had it for nine years.

It’s been little over a week since the news got out. We’re presenting a new round of scripts to Gerry. He makes those passive-aggressive clicking sounds as he’s reading them. Nero played the fiddle while Rome was burning. We are finessing and perfecting and noodling every single detail as the agency is coming down. “What’s the point, Gerry? It’s all over,” I want to say. And then I look around and realize that this is exactly what each one of us in that room signed up for. It’s still about the work.

Maybe we shouldn’t be judging an agency’s success by its survival, but the permanence of its ideas. And through the 20 of us who are still here, and all the others who’ve come and gone through these doors, Barton lives on. I, for one, look forward to a world of advertising filled with many more singing cacti and pin-riddled celebrities. 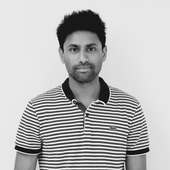 Avinash Baliga is a creative director at Barton F. Graf