I wish more brands made me sweat like Whitney Houston.

The other night, I soothed my COVID-frayed nerves with a descent into a diva-shaped YouTube hole. In one video, a poised, 28 year old Whitney Houston brings the US armed forces to their feet as she effortlessly wails away on "All the Man that I Need." Even through the Minecraft-sized pixels and quaint VHS tracking bars, I can see every crowd-members’ face as they get worked into a frothy mess. She’s sweating on the stage. They’re sweating in the crowd. I’m sweating on my couch. I’m nearly three decades removed from the performance, but it’s still a religious experience.

Brands lust after this type of bulletproof loyalty—hordes of followers who obsess over their every move, every promise, every product. And so often, innovation shops, ad agencies and production houses are on the hook for arousing that type of unabating devotion. But well-meaning marketers regularly lose sight of the fundamental propulsion system of fandoms.

Common passion and purpose have played an increasingly important role in brand-building in recent years. And for this reason, the highly public stumbles of brands like Away, Bon Appetit and Everlane have ricocheted. The sense of betrayal, the boycotts and the demands for lasting change are rooted in the question that dumbfounds so many: how can brands that create such cult followings have such unchecked rottenness in their cores?

In short, they desperately sought fans without behaving like idols.

To get a sense of the ideal fan/idol dynamic, we don’t have to look any further than my joyful-yet-silent freak out while watching Whitney.

More Opinions from Ad Age
Opinion: How to support the LGBTQ+ community through storytelling
Kevin Hunt
Opinion: You can’t ask us to think outside the box if you're going to box us in
Oliver Fuselier
Opinion: Time’s up, ad industry. Black Talent Matters
Reginald Osborne
Opinion: Why the holding company model doesn’t make room for diversity
William Esparza
Opinion: After COVID, ad agencies are in for a big awakening
Diana Lee

Black fandom is built on art that stands for something bigger than sales, clicks and views. Whether it’s Queen Sugar, Insecure, Travis Scott, The Read, or Monet X Change, the work’s charm is often the hazy alchemy of joy, pride, pain and resistance. It’s this decidedly Black spirit that attracts legions, and quickly converts into a full-blown fandom.

At the heart of many Black fandoms, common passion and purpose is seamlessly woven into the art in a way fans enjoy unlocking. When Childish Gambino released "This is America" almost two years to the day before George Floyd was murdered, it wasn’t just the layered piece that was inspiring, it was the conversations that were reignited around race, policing, gun culture and Americana. The video mattered less than the cultural progress his fans sought to realize.

Further, creators in Black fan circles know how to shock audiences out of short attention spans. Black fandoms reap the benefits of surprise, intention and recurring action on the part of creators. As a formidable competitor on "RuPaul’s Drag Race All-Stars," Shea Coulee is the pinnacle of creativity, skill and panache—and while the show broadcasts to record ratings, Shea is making headlines for challenging the racist systems plaguing Chicago’s gay bar scene. Particularly in relation to long-simmering battles for racial equity, Black artists are adept at staying top of mind with their fandoms. It’s a crucial tactic in battling empathy amnesia: that bizarre affliction that sets in two to three weeks after public outrage, and results in mainstream abandonment.

But perhaps most of all, the visibility generated by Black fandom creates systemic benefits that impact those beyond its immediate members. Conversations in and around the Black cosplay scene, for example, have led geekdom in understanding that one cannot “fan” in a single way—in fact, taking the next step to make a piece of content your own is the ultimate fan service. Or take the wildly diverse Black Twitter community, which adeptly wields meme culture to find acknowledgement and appreciation among its ranks, but invokes deep-seated insight to those outside of it.

At the end of the day, the strategies that Black fandom deploys best are those that brands and agencies are scrambling to do better: fusing art and common purpose in pursuit of impact; actively interrupting the general public’s short attention span; amplifying and owning debate around foundational topics.

In the face of COVID-19 and an increased cultural consciousness of systemic racism, many fellow creative industry leaders recognize the current moment requires a reconstitution of the modern agency. What can we apply from Black fandom to immediately reform our creative businesses and deliver responsible work? How do we start behaving like idols, so we can have fans?

The answer is deceptively simple: elevate your value. In the agency world, everything we create, every conversation we have, every presentation we give is a reflection of what we stand for. And businesses are under intense pressure from their consumers to abide by a more complex social contract than they may have realized at their inception. Business must help accelerate the creation of the world that its most ardent supporters—be they employees or customers—want to see. To create fans, we must serve their purposes that exist outside of every transaction.

So I issue two challenges to all the agencies and brands slogging through COVID-19 and rebuilding themselves in the BLM era: first, make one change that makes audiences sweat like Whitney can. That’ll convert your employees and consumers into fans. Then, make all of your work objects of affection and vehicles of change. That’ll convert your business success into a lasting legacy.

This is it, folks. Our last chance to sustain collective action. To redeem our industry. Are you going to do it? 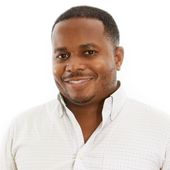 Aaron Powers is director of strategy at Sylvain Labs