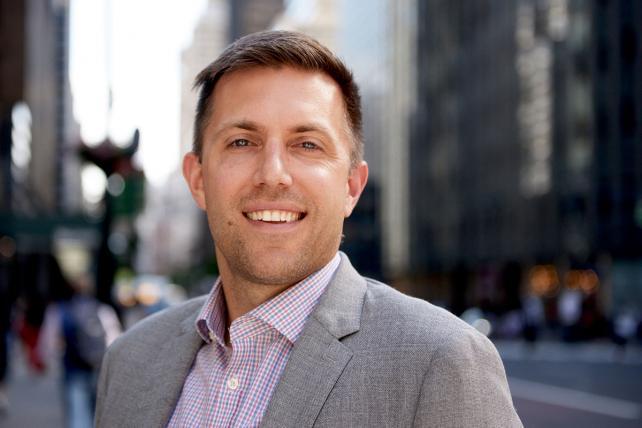 At a time when ad tech is besieged by brand safety concerns, transparency issues and industry-wide consolidation, the Trade Desk has been having a solid run. The demand side programmatic ad buying platform—have we lost you yet?—generated $85.7 million in revenue during the first quarter of 2018, a 61 percent jump from the same period last year.

The Trade Desk was founded with a seemingly simple goal in mind: to help the biggest buyers know what they are buying. Unlike Google, Facebook, and Amazon, which boast massive "walled garden" ad platforms, The Trade Desk is uniquely positioned as an independent platform that supports ad agencies instead of disrupting them. Or so it says.

Stempeck is this week's guest on the Ad Lib podcast. His job is, in part, to translate the bewildering jargon of the industry and parse the challenges and opportunities around things like cross-device targeting and leveraging data, specifically as it pertains to addressable TV.

"Sometimes in the ad tech space, we try to make things as confusing and inaccessible as possible," he jokes. "If you take somebody who's been selling TV for 30 years, the idea of now saying to them, 'OK, I want to sell TV but in a programmatic fashion or through ad tech,' they're like, 'I don't want to deal with this. I'd rather just avoid it.'"

We get into all that, plus going toe-to-toe with Google, what GDPR means for the future of ad tech consolidation, and what this week's AT&T acquisition of AppNexus means for the industry.

"There are some companies—and I'd put AT&T and Brian Lesser [CEO of its advertising and analytics division] on the list. Now they're saying, 'How do we take TV into the next generation of ad sales?'" says Stempeck. "It all comes down to using data at the household level."

Stempeck on consolidation in the Lumascape

"It is consolidating," he says. "It's happening on the sales side. There are fewer SSPs on the supply side. It's a little easier than it was a few years ago. But economies of scale are getting bigger."

"It's a category-threatening problem," says Stempeck. "If people don't think programmatic is brand-safe or if there's a bunch of fraud, that's a huge problem. Not just for us but for everybody in the industry."

On the future of media planning

"We're looking at 9 or 10 million ads a second. So we're seeing the entire internet go by. I don't think marketers appreciate yet what that can mean for media planning. Right now planning and media buying are two different functions inside most organizations. I think we're going to see that start to change over the next few years."

On the melding of creative and programmatic

"Creative for the most part has also been left behind," says Stempeck. "It's all about targeting, execution, ROI, I think creative is probably the next big frontier."