Luke Sullivan on the Art of Obsession

An Interview With the Adman and Author
READ THIS NEXT
Gut Checks and Guardrails: 6 Ways to Stay Small When Your Agency Gets Big
Bart Cleveland
Luke Sullivan wrote many of the ads I have aspired to equal. He was one of my heroes before I knew he was the one writing amazing ads, first at Martin Agency and then at Fallon . So when Luke came to Atlanta in the late '90s, I was ecstatic to have his aura near me.

Luke is probably now better known for his book, Hey, Whipple, Squeeze This: A Guide to Creating Great Ads

. In my opinion, it's the best advertising creative how-to book ever written.

I spoke recently with Luke and learned of his latest antics. He's about to begin a teaching gig and just released a new book, a memoir about his childhood. Thirty Rooms To Hide In: Insanity, Addiction, and Rock 'n' Roll in the Shadow of the Mayo Clinic

is a book that Luke said he had to write. Our conversation delved into where one starts and where one ends in this business. I think Luke's thoughts would be as worthwhile to readers as "Whipple" has been to me.

What similarities do you see between your iconic "Whipple" and writing a story about growing up?

There are zero similarities between this new book, a memoir, and my first book. Well, with the possible exception that they were both written in a state of obsession. In fact, the idea of obsession as part of the creative process so interests me that I wrote a short essay about it on my blog.

Obsession is also how I wrote this new book. It was just one of those things I couldn't not write. I think it's pretty good, but you can be the judge of that . There's a "trailer" for the book on Hey Whipple's YouTube.

As you "sort of " leave the industry, what would be your one piece of sage advice to someone just coming in?

We keep hearing about "T-shaped" people and it makes sense. Today, the most dangerous players are people who have deep knowledge in one skill (that 's the vertical part of the T) and working knowledge in a number of other skill sets (the horizontal). Your deepest skill set may be in technology, as a designer, an art director, writer -- but you have to be really good at one of these crafts. Just being "conceptually" smart, just being "an idea guy"? That doesn't cut it anymore.

If you could do one thing over that you did in advertising what would it be?

I wouldn't have been so stinkin' sure of myself. In my younger years, I was certain the world revolved around me and the next idea I was going to present. But as the years went by , I found that all those answers I had? They'd been replaced with questions. I wish I had talked less and listened more. What I do not regret is having an insane amount of drive. I think that helped me a lot. But having an insane amount of certainty? Not so much.

So, describe your new book.

About the best way I can describe it is "The Shining," but funnier.

It's the story of growing up with my five brothers in a big dark house in Minnesota back in the '50s and '60s. Winters raged outside and our father raged inside and yet we managed to have a wildly fun, thoroughly dysfunctional time growing up, thanks mostly to our mother's protection. Dark humor was the coin of our realm and the Beatles, they were true north on our compass of cool. We made movies, started a rock and roll band, and wisecracked our way though a pretty grim landscape of our father's insanity, Eisenhower's Cold War, fallout shelters and JFK's assassination.

~ ~ ~
Our conversation covered other things but these were gems that I wanted other to benefit from. I know I'm gushing like a fan, but we need more fans of the work today, do we not? And Luke is the first guy to tell you that you can do that kind of work if you put yourself in the right position and, of course, if you do it because you're obsessed. 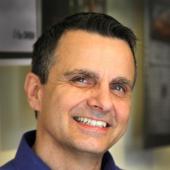 Bart Cleveland
Bart Cleveland is founder of ACES Branding in Austin, Texas. He has spent over 30 years growing brands including The Ritz-Carlton, James Hardie Siding, Coca-Cola, and CNN.
Follow View all articles by this author

Rethink expands to the U.S. with New York office