The agency is No. 6 on Ad Age's 2020 A-List
READ THIS NEXT
Ad Age's Creativity Awards go virtual with 'The Future of Creativity' weeklong event 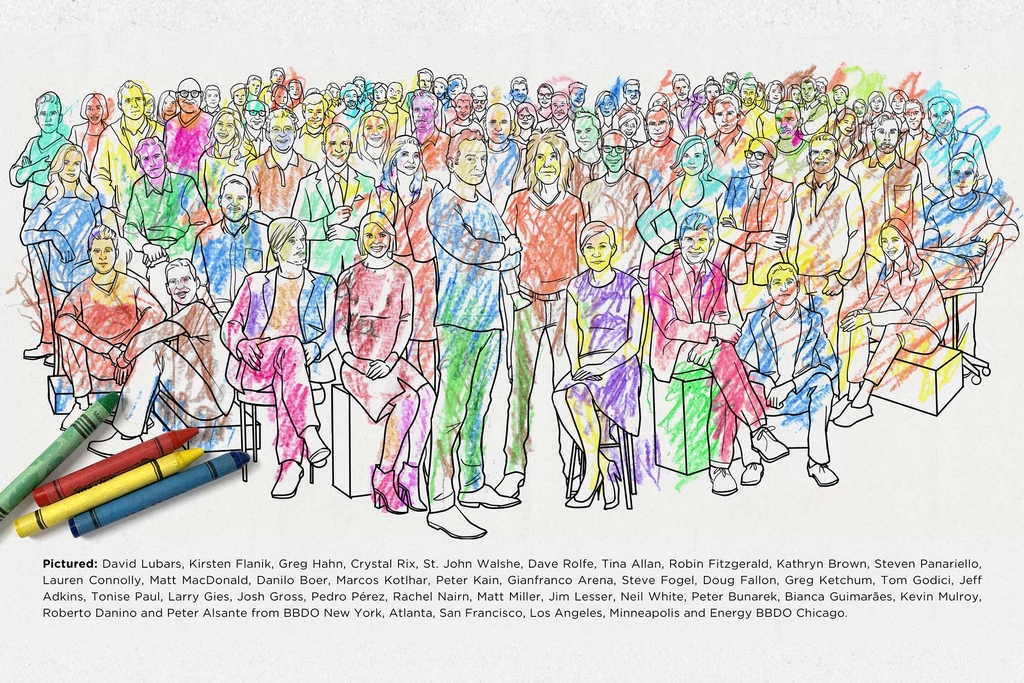 David Lubars likes to use painting metaphors when discussing his agency’s experience in 2019. BBDO North America had a robust year, with projected revenue up to $654 million from $641 million in 2018. The agency’s North America chairman and worldwide chief creative officer says this reflects the contributions of all its U.S. offices. “They all have their own tones and colors they have brought to our palette,” says Lubars, who himself started out at the L.A. office in the ‘90s. He describes BBDO as a “global boutique” agency these days, adding: “We came from boutiques, and we can now do that kind of work on a bigger canvas.”

Lubars says the agency has worked hard to get the right creative teams in place in offices such as BBDO L.A, BBDO Atlanta and Energy BBDO in Chicago. Once, these offices might have been regarded as “satellites” tasked with servicing a particular account, but today they make invaluable contributions to the agency’s performance—and its reappearance on our A-List, having last landed here in 2017.

Energy BBDO, for example, ended the year by being appointed creative agency partner for Brown-Forman and digital agency of record for Australian home-improvement retailer James Hardie. Atlanta picked up new business including startup Kefi children’s play centers. And L.A. created consistently strong work for the agency’s biggest client, AT&T. It included a music video, “Summertime Lover,” which originally appeared in an ad about a boy band but ended up becoming a hit in its own right after viewers demanded a full-length version.

With female leadership at the top of Chicago, New York, Atlanta, Los Angeles and Dallas, the agency can now point to an increasingly diverse offering. That’s reflected in work such as BBDO’s spot for startup Thinx, the direct-to-consumer period-proof underwear brand. Created by an all-female team, the “MENstruation” campaign imagines what the world would look like if both sexes got periods. From checking for blood stains to asking a friend for a tampon, the spot successfully became the first ad to show a tampon “in use” on national TV and increased conversation about the brand by 76 percent.

Sticking with the paint metaphors, the agency can demonstrate broad strokes of creativity, whether for big-budget clients like AT&T and Bacardi, or clients such as Sandy Hook Promise and Monica Lewinsky, for which the agency is handling an anti-bullying campaign.

“We put our best resources into both our biggest and smallest clients,” says Lubars. BBDO New York’s work for Sandy Hook Promise, for instance, is finding fresh ways to highlight the harrowing reality of school shootings. A 2019 spot, “Back-to-School Essentials,” features children showing off new school gear like running shoes, writing implements and socks, which serve the double purpose of enabling them to flee a shooter, defend themselves, or even stanch bleeding wounds.

For an anti-cyberbullying effort by Monica Lewinsky and her public relations firm, Dini von Mueffling Communications, the agency created a dual-screen experience where a teaser film about a bullied girl invited viewers to enter their mobile number in order to see a longer version of the same film­—this one overlaid with text messages the girl was receiving.

Lewinsky tells Ad Age: “BBDO New York exemplifies what it means to use strong creative to change social behavior. More important, the brilliant creative work has been fueled by an unparalleled passion from those on the team to help change the conversation around cyberbullying and our culture of humiliation.”

For Bacardi, that’s about music, and finding a way to connect to younger consumers using the brand’s cultural heritage. This year BBDO tapped into that to create an epic music video and dance in partnership with Major Lazer & Anitta and based on a simple idea: to “pass the beat” by tapping on a Bacardi bottle and then passing it along.

Elsewhere, BBDO persuaded customers to buy espresso from Dunkin’ Donuts with a line of fake espresso-themed apparel for the chain with names like Cappu-chinos, Americano-veralls and Latte-nk Tops. Espresso is now Dunkin’s fastest-growing category, with sales up by more than 40 percent.

There were some losses. Pepsico moved Mtn Dew to fellow Omnicom agency TBWA, something Lubars describes as a “gut punch.” The agency also lost Grey Goose and Humana. On the plus side, it won new business from the likes of Facebook, with briefs for Oculus and for Whatsapp.

Like many agencies affected as clients cut back or halt work due to the coronavirus pandemic, BBDO has recently been forced to carry out layoffs. Among those affected were New York Chief Creative Officer Greg Hahn and Exec VP-Director of Integrated Production Dave Rolfe. Lubars told Ad Age last week he is “too heartbroken to comment.”

But in an earlier interview, he said that one area in which the shop will be focused on in the future is the increasing importance of design: “You’ll see more contributions from our design shops.” Or, in art terms, get ready for some mixed media.