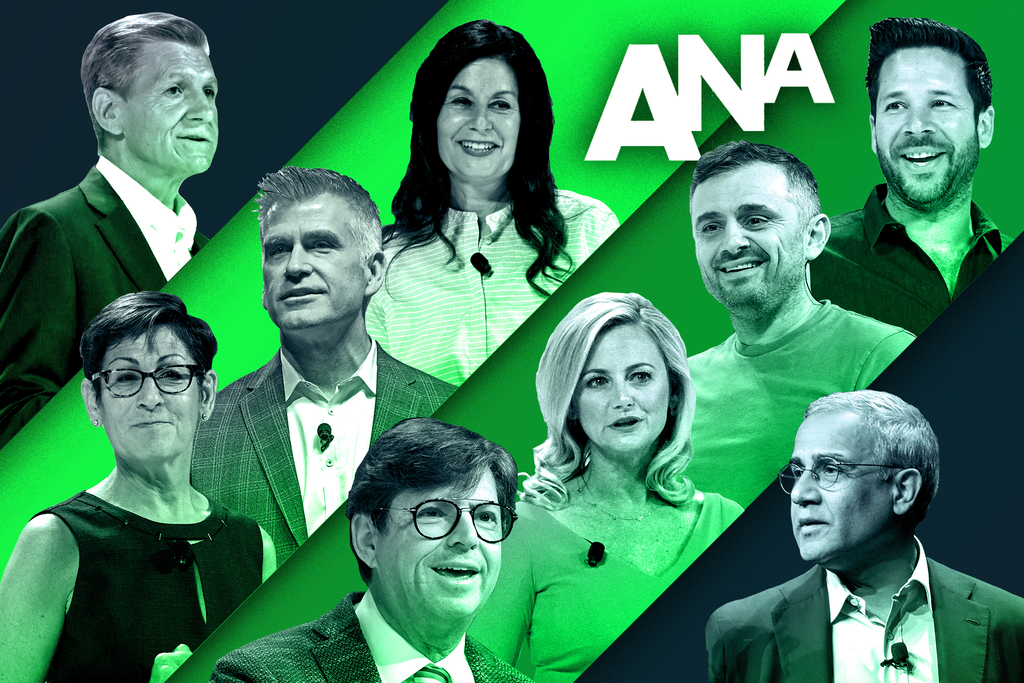 The Association of National Advertisers has long called its biggest event of the year the Masters of Marketing. But this year’s confab might as well have been called “Masters of Emotion.” The event, which drew 3,000 people last week to the Rosen Shingle Creek resort in Orlando, was filled with talk about how marketers must put more emotion into their marketing.

“The whole notion of humanity is a big theme,” Meredith Verdone, chief marketing officer of Bank of America, said in an interview from the sidelines of the event, summing up the message of multiple CMO presentations. “Are you making your tech more human, or do you have humanity? We are building brands and brands are very emotional things. At the end of the day you have to connect rationally, but also in the heart.”

Of course, it wasn’t all about emotion. There was talk about boosting personalized marketing, fixing the industry’s diversity problem and efforts to get brands embedded in pop culture.

Below, a closer look at the major themes that emerged over the four-day conference.

Growth is up, but downturn looms
The ANA has long touted revenue growth as the most important marketing metric. And on that front ANA CEO Bob Liodice delivered positive news, saying eight in 10 Fortune 500 companies grew revenue according to the latest survey, while six in 10 grew after-tax profits. That is an improvement over recent years during which roughly half of the companies on the list have experienced declining after-tax profits. “Our job now is institutionalize that growth to ensure it’s not just a one-time event,” Liodice said. He laid out an ambitious industry goal: Generate $500 billion in incremental global sales over three years. But with the economy slowing, that is a steep hill to climb.

“What matters to [consumers] today might be different than what matters in the depths of recession,” Verdone said in the interview. So marketers must be ready to change their messaging should a downturn hit. But she said brands should avoid slashing marketing budgets because “it’s important to continue your investment."

Taking on the diversity deficit
That marketing could use some more diversity was plain from the sea of predominantly white faces at events throughout the conference. Liodice dedicated the entirety of his opening remarks to plugging the ANA’s multicultural initiatives, and several speakers plugged the group’s new “#SeeALL” program that is aimed at getting marketers to better target multicultural communities.

Publicis Groupe Chief Growth Officer Rishad Tobaccowala pointed to two of the industry’s less-discussed diversity deficits. “Do we really have diversity of thinking, or do we just have diversity?” he said. “Are we creating cultures where people can speak up and question and not fear they’ll lose their job?”

One piece of advice Tobaccowala gave was “please build a case for the exact opposite of what you believe and please try to understand why that’s true. Because if we cannot engage with other people, we have a real big issue.” He said he's spent a lot of time building the case for the opposite of what he believes.  “I have a very, very strong case as to why Trump is the greatest American president,” he said.

He also asked: “Where are all the old people?” He noted their relative absence from the event itself and the industry in general even though 10,000 people turn 65 every day and more than half of wealth is held by people 60 or older.

“I’ve become one of those crazy old people,” Tobaccowala said. “And apparently older people have trouble learning new things, I’ve been told. But I launched the interactive marketing group when I was 40 years old. When social media came around and I learned it, I was 53. It’s absolute bullshit and we as a group have to recognize that if we can’t make every part of our industry safe for what we’re going to grow up to be, this will be a big issue.”

Getting personal
Mass marketing is out and personalization is in. Multiple speakers plugged moves to communicate to consumers on a one-to-one basis. Procter & Gamble Chief Brand Officer Marc Pritchard, who was elected to another 2-year term as ANA board chair, said P&G is “reinventing media, moving from mass blasting with a lot of waste to mass reach with one-to-one precision through data, analytics and digital technology.” He said the marketer’s consumer database “enables advanced programmatic media buying that finds people with the highest propensity to buy and reaches them without annoying ad frequency.”

But looming over the personalization trend are the complications of gathering consumer targeting data amid new privacy regulations. “The question for all of us is in this new world of personalization and privacy is how do we do more with less data,” Kirk Perry, Google’s president for global client and agency solutions, said in a lunch the digital giant sponsored. If the last 10 years was about third-party cookies, then “the next 10 years are going to be about personal relationships,” he said, adding that getting “first-party data is core to that relationship building.”

Purpose...again
Consumers don’t want to be sold to, they want your brand to somehow make their lives better, a refrain repeated by speaker after speaker. Bank of America gives consumers the financial power to change the world. Ally is a “relentless ally for our customers’ well-being,” said Chief Marketing and PR Officer Andrea Brimmer.

Telisa Yancy, chief operating officer at American Family Insurance, said the company isn’t simply selling insurance, but “the promise of trust that you can go on to fulfill your dreams.” She said the company isn’t about “rates and prices and characters and critters,” but something more valuable to consumers, a way to “Dream fearlessly,” as its ads promise. She said the company rejected the idea of going with an animal or a mascot in its ads as some rivals have done because that would not allow it “to talk about our customers.” Keeping ads consumer-centric was a big theme as was the idea of transforming marketing departments to focus on brand rather than product.

Eric Asche, chief marketing and strategy officer at the Truth Initiative, talked about how the anti-smoking group has evolved its messaging over 20 years, recasting it to appeal to the psychographics of Gen X, Gen Y and Gen Z. "Our biggest fear is that we will wake up one day and no longer be relevant," he said, urging the audience to "resist the urge to be transactional."

Getting emotional
CMOs have long used ANA to show off their most emotional ads in what amounts to a contest on who can elicit the most tears in the audience. But this year there was a particular focus on using emotional marketing as a strategy to break through in the cluttered media environment.

“Emotional attraction is still the No. 1 driver of preference and you have build that love for your brand and you have to attract people to your brand because they love that brand,” said Brimmer. She used her  presentation to show how the financial services provider is building bonds with its consumers. That includes a program called “Banksgiving” in which it surprised customers with cash to help them fulfill wishes, like handing out $50,000 to a woman so she could continue giving out Thanksgiving baskets to people in need.

SAP Chief Marketing Officer Alicia Tillman made the point that this is also good business. She said “humans experience 27 different kinds of feelings and today consumers are using emotions more and more to drive purchasing decisions. In a study of 1,400 ad campaigns, those with purely emotional content performed twice as well as those with purely rational content.” But from there her message got a bit more, well, transactional.  "We need to get experiential data to help us understand those 27 feelings,” she said, which SAP happens to offer following its Qualtrics acquisition.

It’s not an ad, it’s a show
There were no celebrity cameos at this year’s event, though they made on-screen appearances including Jennifer Hudson and Derek Jeter appearing in spots shown by American Family’s Yancy, and Casey Affleck spoofing a Dunkin’ fanatic in a “Saturday Night Live” clip shown by Dunkin’ CMO Tony Weisman.

There was plenty of talk about how brands can make closer links to Hollywood and pop culture. P&G Chief Brand Officer Marc Pritchard outlined his company’s growing number of entertainment deals aimed at “making ads more interesting by merging the ad world with other creative worlds like comedy and music.” That included a web series of “Masterclasses” for SK-II featuring James Corden, Naomi Watanabe and Chinese actress Tang Wei, including a spot where John Legend composes a song about pitera, the active ingredient. The pitera ditty has 641 million views and has spawned a 29 percent increase in search and double-digit growth in new users for the high-end skincare brand, Pritchard said.

P&G’s growing list of entertainment content includes an SK-II Timelines series exploring tensions between moms and daughters in Asia and the U.S.; a partnership with Queen Latifah and Tribeca Studios to create The Queen Collective series, including two documentaries that premiered at TribecaX; and Activate, a partnership with National Geographic and Global Citizen to tell stories about eliminating extreme poverty through a six-episode documentary series distributed in 172 countries.

Fiat Chrysler CMO Olivier Francois dedicated his entire speech to the automaker’s music strategy, including a big integration deal for Jeep with NBC’s songwriting competition show, “Songland.” “The brand becomes like a character in the show, like any character in any show you connect with it … you relate,” he said. Likewise, Anheuser-Busch InBev U.S. CMO Marcel Marcondes said Bud Light’s “Dilly Dilly” ads are not a “campaign” but a “content series” full of characters. “The beauty of being connected with culture is people start to talk about you spontaneously,” he said.

Postmates Senior VP of Marketing and Communications Eric Edge highlighted some of the foods ordered by celebrities, from Zendaya getting pints of Häagen-Dazs from grocery store Vons to John Legend and Chrissy Teigen ordering chicken sandwiches from McDonald’s and Post Malone’s affinity for Popeyes biscuits. “See, these are all the real stories that are authentic to our brand and to the talent that we are featuring,” said Edge, who also showed off Postmates spots starring Martha Stewart.

Talking tough
As the ANA has invited more non-CMO speakers to speak at the event, including at its new “second stage” venue, the presentations have become decidedly less polite. VaynerMedia’s Gary Vaynerchuk dropped his usual F-bombs in a fiery presentation on Friday. But strategic consultant Joseph Jaffe in talk called “Built to Suck” broke new ground with what may be the first utterance of “motherfucker” from the conference stage.