Don and Joan's Beautiful Work Marriage Almost Defies Belief
READ THIS NEXT
The 'Mad Men' Prop Auction: 5 Items You Need At Your Agency

Don Draper's most interesting relationships have always been with the strong women who manage to parry his charm. There's Peggy, whose evolution from Don's secretary to mentee to full-fledged deputy has provided so much of the show's drama, even if she did kinda throw herself at him at one point. Less visible is Don's relationship with Joan, a prototypical work marriage built on a very adult, got-your-back, you-can-count-on-me type ethos not otherwise seen in the Sterling Cooper Draper Pryce offices. 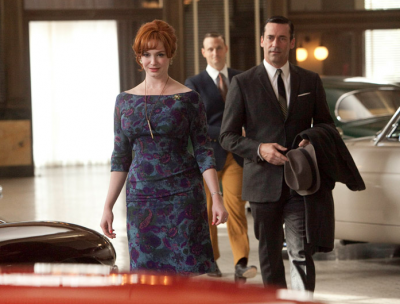 Joan and Don at the Jaguar dealership

Some suspension of disbelief is required of this relationship. Besides feeling slightly before its time, both Don and Joan are a bit too pretty and their repartee a bit too well-lubricated to be entirely convincing as just-friends material. HOW DO THESE TWO GREAT FLIRTY HEADS OF MONOCHROMATIC HAIR NOT JUST DO IT, we are led to wonder. Yet we want this relationship, built on mutual respect despite the asymmetrical power distribution, to remain pure.

When Joan's matrimonially-AWOL husband serves her with divorce papers from Vietnam, it is Don who is there for her, albeit accidentally. As part of a pre-pitch preparation, he's headed out to the Jaguar showroom as Joan is ripping into the secretary who let in the process server. After calming her, Don gallantly hangs his overcoat on her shoulders and for a good chunk of the episode the spurned wife plays Mr. . Draper. After the series' second great scene in a car dealership, the pretend couple end up in a dark bar at midday.

There, Don, who except for a giddy jaunt to Howard Johnson has been a fairly miserable bastard this season, turns on the charm. He doles out compliments. He strikes Sinatra poses. He even tries to make the case -- to a new mother in 1966, no less -- that divorce ain't so bad. As ever, the goal is not to conquer Joan but to make her feel better. He even nudges her toward another man, before leaving alone to give the gearshift a proper workout -- the Jaguar's that is .

Along the way, there's reminiscing about the days when Joan was the office's focus of attention and Don was the gadabout. He quotes "this woman" -- "this woman" being season-two fling Bobbie Barrett, who nearly cost him his first marriage: "I like being bad and going home and being good." Joan observes that Don is happy with Megan and he agrees.

But happiness on planet Draper equates to not cheating on the wife while lots of stuff, including the wife, gets thrown around violently in a big fancy apartment. This episode, there's a mini-spat after he has to sit through a production of "American Hurrah," a noggin-beating countercultural play whose attitude toward business can be summed up by its description of ad-induced vomiting. Don is miffed at the play's -- and Megan's -- anti-advertising attitude. Her inscrutable response: "I don't think it's so much a strong stance against advertising as much as the emptiness of consumerism."

Up until now, domesticity hasn't been great for Don's worklife. There's been much office couch-napping and many early departures, partly a function of the fact that he's too senior to have his hands on the work day-to-day and partly because he's out of touch, culturally speaking. This, however, could change with the forthcoming Jaguar pitch.

When we last saw the upmarket British car brand, its top marketer was fishing an SCDP-funded hooker's chewing gum out of his pubic hair in front of his wife. Now, thanks to persistence from the ever persistent Pete Campbell, the agency is in the mix for the account. Informed of this at the beginning of the episode, Don's reaction is ho-hum. By the end, he's delivering a speech to the staff that 's as inspirational as any of his new-business pitches. His tone and gestures, especially the on-the-fly shedding of the jacket, are motivating, even if his tropes are curious. He promises that a Jaguar win would be a "great leap forward," a curious usage in 1966 when the only great leap forward that most people knew was Chairman Mao's disastrous economic and social policies that , it would come to light, killed about 45 million Chinese.

That aside, Don is back and, it seems, we have Joan to thank.

That's the good news at SCDP. The bad news is that Lane Pryce is embezzling a massive -- $8,000!!!! -- sum of money in order to pay down his tax debt to the crown. To be fair, the Brit financial officer initially tried to pass himself the sum (sort of ) legitimately, as an early, approved bonus culled from a furtive credit extension. (Ok, maybe that 's not legitimate.) In any case, that plan goes awry and Lane ends up cutting a check to himself on which he traces Don's name. What does it mean to forge the signature of a man whose very identity is a forgery? I don't know, but media-spending cuts at Mohawk Airlines mean more lean times at SCDP -- which in turn suggests his crime will be outed quickly. Along with the Jaguar pitch, Lane's potential downfall (a potential opening for Joan, who does his work for him anyway) will surely define season five's final episodes. 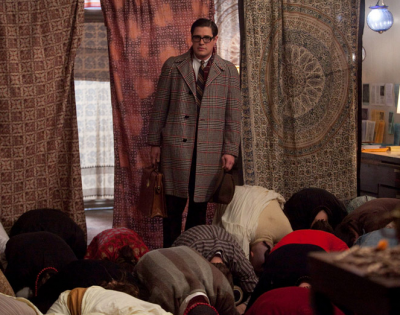 Harry with the Krishnas

The weirdest of this episode's plotlines involve the usually awful Harry Crane and Paul Kinsey, the copywriter from the show's early days who reappeared this week as a Hare Krishna. We are treated to the sight of the bespectacled and besuited Harry in a sweaty chant and the no-less entertaining scene of the shorn Kinsey trying to get Crane, head of the media department, to put his "Star Trek" spec script in front Gene Roddenberry or at least someone at NBC.

Though he may be playing the role of the blissed-out convert, Kinsey is deeply unhappy, overly concerned with politics among his sect of Krishnas, and obsessed with one of them, the manipulative Mother Lakhsmi. By plopping herself face down on Crane's desk, Lakhsmi tries to get him to kill off Kinsey's scriptwriting and free him up to recruit more followers. It's less seduction than tit-for-tat. In a rare likable moment, Harry, known for being cheap and self-concerned, defies Lakhsmi and gives his old co-worker $500 and a trip to Los Angeles. Because, you know, there aren't any cults out there.

*******
"Mad Men" anachronism watch: I stopped cold on a line spoken by saucy receptionist Scarlett, who said that Kinsey had "sort of been threatening to stop by ." The use of "sort of " -- which is now like "um" for grown-up David Foster Wallace readers -- felt very contemporary. Like "Girls"-contemporary. I have no etymological proof to back up any assertion that this is an anachronism, just as I have no proof that Joan's talk of "control" in the office is also well ahead of its time. But I throw both out there because people are interested in this stuff. In fact, they're so interested in this stuff that there's a very good website called Prochronism that tracks these matters in a very granular way in both "Mad Men" and "Downton Abbey."