Connelly Partners took a hard look at itself—and didn't like what it saw: Living on the Edge | Ad Age
Skip to main content
Sign In Register

How one small agency got out of a rut by regaining its humanity
READ THIS NEXT
6 takeaways from Ad Age’s Small Agency Conference
Credit: iStock

Living on the Edge is a weekly series exploring how small agencies have overcome adversity and applied creativity, ingenuity and hard work to solve a business problem. This installment is about how one small agency got out of a rut by reclaiming its humanity.

I will keep this free of clichés and big words. I am a plain-spoken kind of guy. I’ll tell this chapter of our story as if I were sitting at a bar and not a podium. Because this article is about honesty, and honesty is best when blunt, to the point, and served over pizza and beer.

The honest truth is that about 18 months ago Connelly Partners was stagnant. Hmmm, stagnant is a big word…too big for this. We were in a rut. Three letters, that’s better.

We had been in business for 20 years. We were good. Sometimes great. Always nice. We lived under the radar. We were not the flashy peeps and we didn’t always dress like the cool kids. And we had been rocking along for so long without missing a beat that we never really took a long hard look at ourselves.

Until we had to.

Our revenue numbers a few years back were a whole lot bigger. In the last year, we weren’t losing clients, but more client spending was being taken in-house; we all know that story. It was time for a long hard look in the mirror. And like most middle-aged people who take that long hard look, we were mortified by what we saw.

Honesty can be painful.

We still had fire, but we were getting comfortable. We were falling into formulas. We were not challenging ourselves and we were drifting from what made us successful in the first place–embracing empathy. Empathy had always been our calling card.

We on occasion focused on disruption and entertainment rather than connection and empathy. That’s not us.

Then there was our love affair with data. We had begun to rely on it. On numbers, on graphs, on printouts from data scientists. Our brains, curiosity, powers of observation began to atrophy. Data was telling chief marketing officers and agencies alike what to do.

At that moment we saw we were living in a "Terminator" movie and the machines were taking over. We would redefine ourselves as defenders of the right brain and the role emotion plays in every buying decision. We would use data to inform better questions, not to provide all answers. We truly appreciated data. We just had to use it differently.

We formalized our love of anthropology. Our study of human behavior. Our strategists began to focus more on customer life and less product benefits. We became more of a “Please tell us about your life” agency and less of a “Let me tell you about this product” agency.

We focused on the emotions present during the entire customer journey. Our creatives focused on framing those emotions.

Most of all, we embraced honesty. Don’t get me wrong, we would always be the people to tell clients what we thought. No filter. If another agency had a great idea, we would say so. When a client was blind to a reality, we would point that reality out. When we made a mistake, we would own it.

But now was time for a different kind of honesty. Challenging the role of data meant some would toss us into the Stone Age category. Defending humanity meant risk. To be more focused on emotions and less on algorithms was stepping into a minefield.

But our message resonated and our work for clients got stronger.

We’re adding 15,000 additional square feet of office space to support our growth. We built a Maker’s Studio. We built a roof deck, which has nothing to do with our embrace of honesty, but is wicked cool and supports our culture.

The biggest point to all of this is that it’s hard to take a look at yourself 20 years into a journey and question where you are. It’s hard to take a stand in favor of humanity in the era of data and technology.

It’s hard to be honest with your people, your clients, yourself. It’s risky. It’s painful. But when you find yourself in a rut, it’s best to be honest about how you drove off the road in the first place.

You were probably looking at the rear-view mirror instead of the road ahead.

Do you have a story to tell about how your small shop overcame adversity and came out stronger? Click here to learn more about out new series and stay tuned for details about out Small Agency Conference & Awards coming in August. 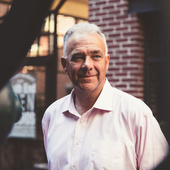 Steve Connelly is president and copywriter at Connelly Partners

We Believers is an inspiration for change

Quality Meats gains notice in Chicago and beyond for nimble approach

Alto uses creativity to help solve the challenges of the world

For Giant Spoon’s 'Halo the Series' campaign, the sky was no limit