Maybe Some Strong Agency Cultures Work Against Leadership Diversity
READ THIS NEXT
Marketers: Bicultural Hispanics Need to be Heard, So Give Them a Voice

Coca-Cola's multilingual "America the Beautiful" spot is courageous beyond belief. And the recent AdAge feature story, "Ad Campaigns Are Finally Reflecting Diversity of U.S." demonstrates a general trend of progress in creative work. But unfortunately, when we hold up the cultural messages of the Coke spot and the AdAge story as mirrors against the agency landscape, the results still aren't pretty.

This is an overwhelmingly white industry in an America that's increasingly multi-racial. The census tells us there are now 116 million non-white Americans -- about the same number of people as the combined populations of France and Spain. So let me ask a question that's bound to make some uncomfortable: How many non-white executives are on your agency's leadership team? How many have there ever been, in the history of your agency? If you're at an agency with more than 100 people and the answer is zero, I have a follow-up question: Seriously?

The problem here isn't intent. For years, we've created committees, launched HR initiatives, held panel discussions -- all intended to make agencies less racially stratified. But most of this activity seems to have had little effect. As Ken Wheaton wrote in an Ad Age piece in 2012 (citing survey data from Tangerine-Watson), 74% of minorities in the industry feel "My experience as an employee from a multicultural background is different from my colleagues." This suggests that minorities at agencies feel isolated, feel they have less access and connection to senior agency leadership, and suffer through a sense of silent uneasiness.

Why the lack of progress? Here's a thought: Maybe some strong agency cultures actually work against leadership diversity. Agencies are collections of extraordinarily talented people who select other talented people to join them based on -- among other things -- the attitude, "Who feels like us?" Stated or unstated, there's a culture-fit litmus test for hiring, promotion and leadership readiness. And though it's a powerful unifier and motivator, could culture unwittingly be a mechanism for maintaining the status quo? A telling fact from the survey data: White employees point to "agency culture" as their primary motivator for staying in the ad industry; African-Americans, Latinos and Asians do not.

To be fair, this isn't about bad actors. Rather, it's about the unintentional bias of good people; the last 25 years of social science research points conclusively to the fact that bias pervades human thinking. Bias is hidden, even to (or perhaps, especially to) the person whose brain generates that preconception.

The researchers who developed the Implicit Association Test (IAT) know this all too well. The test -- which in its various forms has now been taken over 14 million times -- is elegantly designed to surface hidden preferences that may be unknown even to the respondent. Test subjects who earnestly believe they have never, and would never, behave in a discriminatory fashion are astonished at their own results. In their eye-opening book, "Blindspot: Hidden Biases of Good People," Mahzarin Banaji and Anthony Greenwald explain that about 75% of all respondents who've taken the Race IAT over the years reveal what they call the "automatic white preference." Agency leaders aren't purposefully discriminating against non-whites, but they may be unwittingly giving preferential treatment to people who look like the group already running the joint.

With little fanfare and drama, some agencies have made progress. Importantly, there doesn't seem to be any tradeoff in quality of work from creating a culture of inclusion. Four agencies were listed in the Tangerine-Watson survey for best corporate culture: Wieden & Kennedy, TBWA, Ogilvy & Mather, and my own agency, DigitasLBi. Each of these agencies brought home hardware from Cannes the last two years. And every one of them has (or has had) non-white execs on their agency leadership team -- as does Grey, the consensus Agency of the Year in 2013.

These agencies prove the point that the goal posts have moved. At one time, the diversity barometer was based on companies proudly pointing to junior-level, non-white employees as evidence of success. That shortcut just doesn't cut it anymore.

Let's get even more uncomfortable. What if, in every new business RFI, the first question asked was: "How does your leadership team reflect the diversity of modern society?" What if every person asked to serve on an agency "diversity council" asked this of his or her management? What if every potential employee coming in for an interview asked the same?

Simply knowing that this question (among others) will be asked -- again and again by people whose opinions matter deeply to the agency -- may spark a new image in the mirror. And, hopefully over time, some real change in our business. 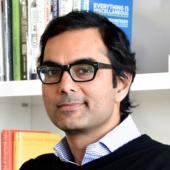 Baba Shetty
Baba Shetty is chief media and strategy officer at DigitasLBi.
Follow View all articles by this author