Whether It's an Honor or Insult to Language, It's Unstoppable
READ THIS NEXT
Marketers: Bicultural Hispanics Need to be Heard, So Give Them a Voice
As Hispanic Heritage month comes to an end, I'm reminded of the contributions that Hispanics have made to the U.S. One of those contributions is in the area of language. I was trying to find a count (so if anyone has one, chime in) of the number of Spanish-language words that have become part of the English-language dictionary in the last few decades. Regardless of the specifics, however, there's no doubt that the Spanish language and the English language are inextricably intertwined. From adios to Zorro, Merriam Webster is chock-full of words that either trace their root origins to the Spanish language or are Spanish-language words that enjoy such popularity in today's contemporary vernacular that they have passed the criteria for acceptance by Merriam-Webster's editors.

The process for adding words to the English language dictionary is described by the Merriam-Webster team as follows:

To decide which words to include in the dictionary and to determine what they mean, Merriam-Webster editors study the language as it's used. They carefully monitor which words people use most often and how they use them.

Each day most Merriam-Webster editors devote an hour or two to reading a cross section of published material, including books, newspapers, magazines, and electronic publications; in our office this activity is called "reading and marking." The editors scour the texts in search of new words, new usages of existing words, variant spellings, and inflected forms–in short, anything that might help in deciding if a word belongs in the dictionary, understanding what it means, and determining typical usage. Any word of interest is marked, along with surrounding context that offers insight into its form and use.

Additionally, Merriam-Webster has an annual "word of the year" list. "Quixotic," for example, was a 2007 selection, appearing the same year the word "Facebook" achieved the same status.

The Spanish language, on the other hand, is regulated by the Royal Spanish Academy. Based in Madrid, Wikipedia states that it is affiliated with national language academies in 21 other hispanophone (i.e., Spanish-speaking) nations through the Association of Spanish Language Academies. The RAE is a major publisher of dictionaries and grammars, and has a formal procedure for admitting words to its publications. There are those who swear by the rules of the Academy and are faithful to the institution, believing that it plays a critical role in maintaining linguistic purity and consistency for the good of all Spanish speakers around the world. There are others who are harsh critics of the Academy, accusing it of being slow to add new words and scoffing at its arrogance while pointing to its limited word count as evidence that it is not as all-powerful as it would like to assert.

An article by Ricardo Soca on elcastellano.org quotes linguist Manuel Soca, a member of the Royal Academy, for his views on the concept of governing language or of having language be deemed usable or unusable, authentic or contrived, by any single institution. It cites Soca as saying: "There is a fundamental error in this belief about the Academy: that of considering that anyone -- be it a person or a corporation -- has the authority to legislate language. Language belongs to the community that speaks it, and what this community accepts is what truly 'exists,' and what is used and accepted is what is definitively correct."

Soca's point of view is at the heart of the on-going debate about what is often referred to as "Spanglish." The use or even mention of Spanglish provokes heated debate about what it truly is and what impact it has on Latino and non-Latino alike. Some would argue it's slang. Others would argue it's closer to Yiddish, its own language with its own grammar. To some it's part of U.S. Hispanic pride and a proud symbol of the U.S. Hispanic identity. To others, it's a "bastardization" of the Spanish language and a shameful reminder of the state of education in the U.S. Hispanic community, a societal concern that focuses on youth who are challenged to speak either English or Spanish with any respect for grammar, spelling or punctuation not to mention linguistic purity.

In my opinion, regardless of your perspective on or preferences about the role of Spanglish, one has to acknowledge that it is undeniably a reality, in some cases a necessity, and most definitely it is here to stay. I find it to be particularly prevalent in beer advertising or during Hispanic Heritage month, as creatives are asked to put just the right cultural spin on a piece of copy communicating a "Latinos-will-like-it" giveaway or some celebration with a food, music and/or dance focus. 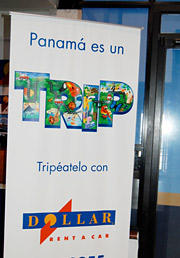 And lest anyone be left with the impression that Spanglish is unique to the U.S. Hispanic "voice" or that the use of Spanglish is a U.S. phenomenon, I have attached two ads that I stumbled upon during a recent trip to Panama. The use of Spanglish in the Dollar Rent-a-Car ad is evident in both the use of the English language word "trip" and the created word Trip?atelo, which does not exist in Spanish. Then there's Heineken, which has opted to retain the word "keg" in spite of the fact that there is a word for a keg in Spanish. And then there's the subject of Parkeaban. Where do I begin?

Upon sharing these with colleagues, I deliberately withheld information about where the ads were found. In all cases, the assumption was that they were U.S. advertisements. To those for whom Spanglish is irritating, these ads were viewed as butchering the language as only U.S. Hispanics can. For those who see Spanglish as a positive form of expression, they were viewed as youthful and fun and very much a part of the U.S. Hispanic psyche. 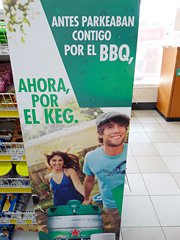 In both cases, it came as a surprise that the ads, liked or disliked, were not directed to U.S. Hispanics, but rather were reflective of the Panamanian reality. Granted, those who know Panama are very well aware of the unique relationship the country has had with the U.S. over the years. So maybe it's somewhat of a Panamanian thing as opposed to a sign of things to come in Latin America as well. But, then again, maybe not.

In varying degrees, Spanglish is making its way across the Americas. U.S. Hispanic Creatives are tinkering with Spanglish more and more each day. They are allowing it to shape communication in many a category, with an emphasis on those with a youth focus. It will be the work of Latin America's "Mad Hombres" to determine what role Spanglish will play in the lives of consumers who may live south of the U.S. border, but who are influenced by a cyber-world that no longer relies on Academies or dictionaries to set the rules on what gets said or how it gets said in this grammar-less, unpunctuated, spelling-doesn't-count age of Facebook entries and Tweets.