For the launch of its new X2 sports activity coupe, BMW turned to Twitter to harness the platform’s power to connect brands with an engaged and receptive audience. | Ad Age
Skip to main content
Sign In Register

Ahead of the launch of the BMW X2, its first-ever sports activity coupe—the hottest new car type among millennials—BMW (‎@BMWUSA) was faced with a challenge: How to leverage social media to build mass awareness and drive consideration for a completely new product?

Looking to surprise its customers and distinguish the X2 from others in its class, BMW turned to Twitter, harnessing the platform’s power to connect brands launching something new with an engaged and receptive audience.

With few product launches per year and a lengthy buying cycle, BMW recognized the importance of a successful campaign on Twitter that would build mass awareness and drive consideration for its new line.

BMW kick-started its campaign with bold, creative videos teasing the X2. At launch, it leveraged Twitter’s First View product to run a video takeover campaign designed to drive mass awareness of the new car. According to a Nielsen Digital Brand Effect study, compared with U.S. campaigns without First View, those that use First View can increase recall among more people at lower costs. Simply said, the study found that the first ad position on Twitter overdelivers.

To start its campaign, BMW teased videos of a David Bowie-themed car coinciding with the exhibit on the late music legend at the Brooklyn Museum in New York. To complement the videos, BMW leveraged Twitter’s Conversational Card, which enables fans to share a pre-populated Tweet about the car simply by clicking a strong CTA. 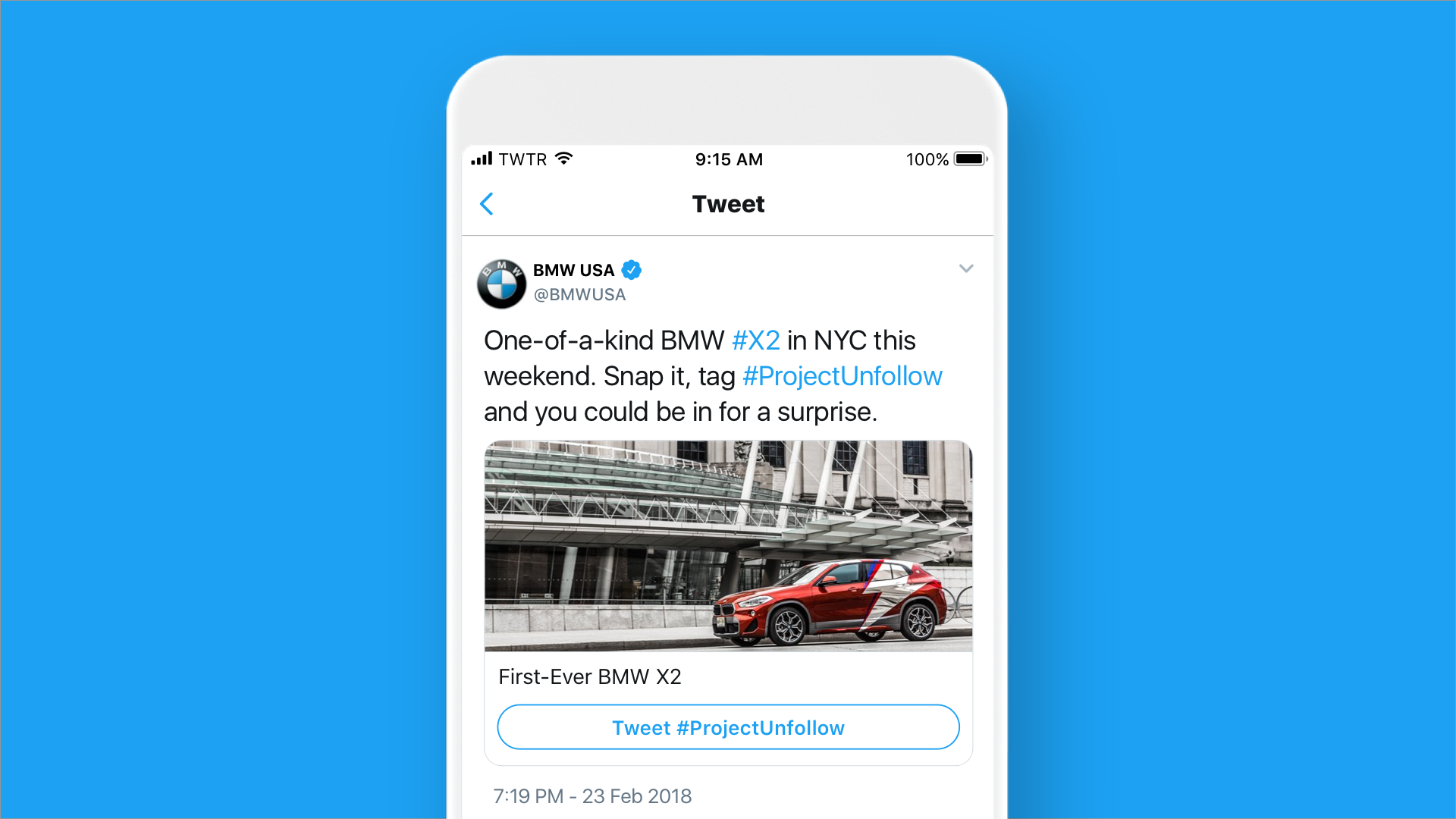 To build momentum, BMW partnered with Twitter’s ArtHouse influencers to promote the X2 at key cultural events popular with its millennial target audience, like Coachella and Fashion Week. It used Promoted Tweets with images to get fans excited.

Make sure you cover every new adventure front to back, never leave an open door. Unless it's the first-ever #X2 @BMWUSA #ProjectUnfollow #ad pic.twitter.com/dLr8VfqCEF

But it wasn’t done—BMW retargeted the audience who engaged with its ads, providing additional video content and driving viewers directly to BMW’s website to learn more about the X2 or schedule an appointment to see it.

Audience retargeting helped BMW reinforce its message and drive awareness with its audience throughout the year, keeping the X2 top of mind for potential buyers who might be mulling over their decision.

This is for the Unfollowers. The first-ever BMW X2 is here. #ProjectUnfollow pic.twitter.com/gPXwUegGl9 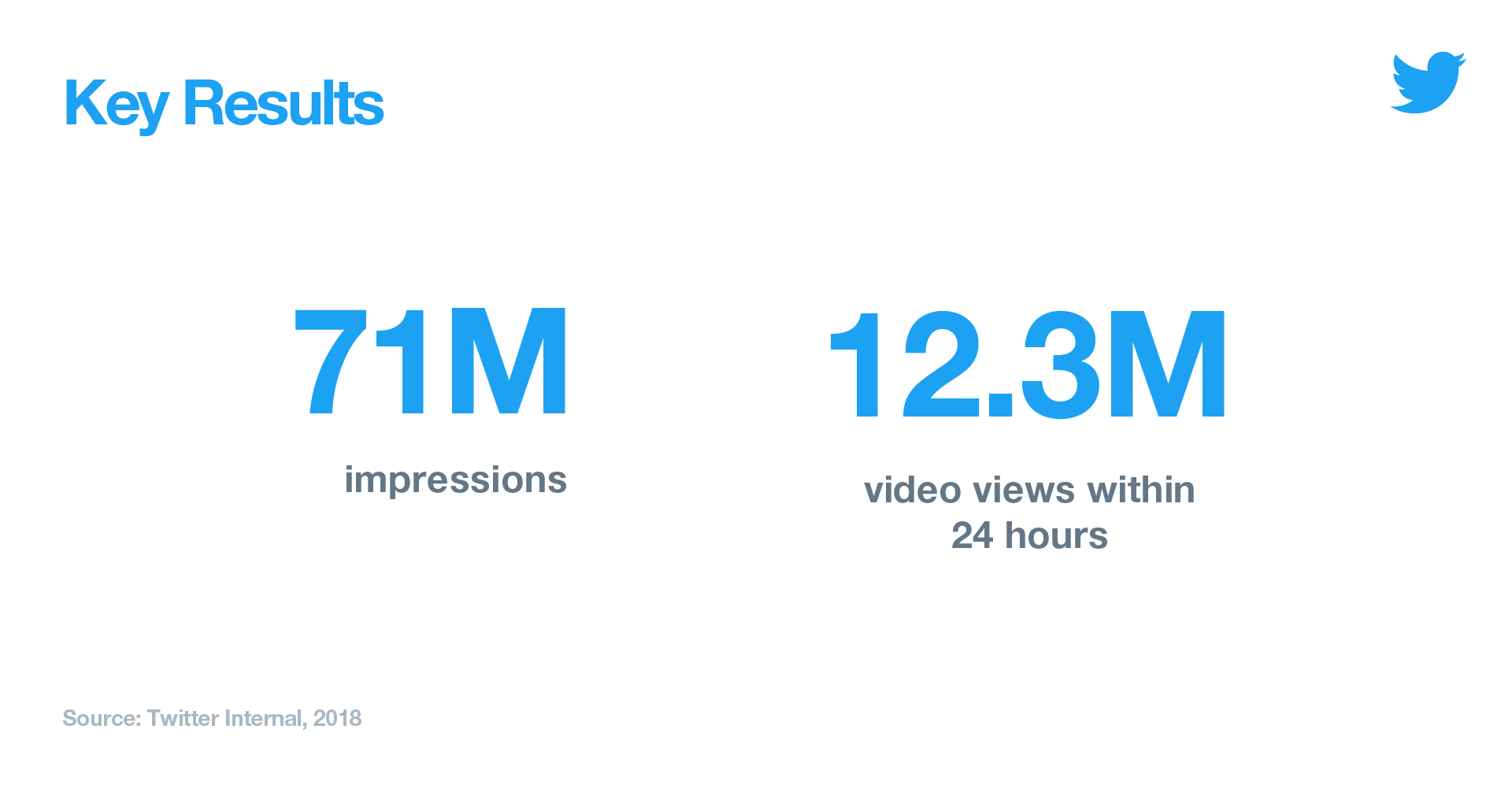 By turning to Twitter for launch and following recommended best practices, BMW successfully launched its X2 on Twitter, grabbing people’s attention and breaking through its audience’s timelines. Pairing First View with Promoted Trend generated 71 million impressions and 12.3 million video views, all within 24 hours of launch.

The article How BMW drove mass awareness for its new X2 vehicle by launching on Twitter about first appeared on Twitter.