Best of 2020 No. 23: Microsoft and Michelob Ultra bring NBA fans 'courtside' in the Orlando Bubble

Fans couldn't watch games in person, so this digital innovation was the next best thing

Through New Year's Day, Ad Age will be counting down the 30 best campaigns and brand ideas of 2020.

No. 23: Throughout the pandemic, sports leagues and brands came up with plenty of innovative ways to bring the game experience to fans at home—and even found sophisticated ways to bring the fans to the game. For the “Orlando Bubble” phase the NBA season, the organization teamed up with Microsoft and Michelob Ultra to transport fans “virtually” to games via Microsoft Teams’ “Together Mode” and 17-foot screens that surrounded players on the court—just as real stadium seats would. Though the experience was a bit clunky (fans appeared bigger-than-life and there was noticeable glitching in their movements) it was an ambitious idea that when in-person games resume, could potentially be a way to enhance fan participation in the future for those living miles away from their home teams.

In early March at the Staples Center in Los Angeles, after the Lakers beat the Milwaukee Bucks in one of the final NBA games before COVID put the season on hold, a reporter asked LeBron James how he felt about potentially continuing the season without fans. “I ain’t playin,” he bluntly said.

That sentiment is at the heart of an NBA innovation that has brought basketball fans literally into the game after the league restarted its 2019-2020 season and now prepares for the playoffs inside the "Orlando Bubble" at ESPN's Wide World of Sports Complex in Walt Disney World Florida. The association teamed up with Microsoft, Michelob Ultra and the beer brand’s agency partner FCB New York to create “Michelob Ultra Courtside,” a totally virtual experience whereby fans were able to sit together and cheer on their teams in the arena during NBA games.

Via massive digital screens and Microsoft tech, during each game, 300 audience members appear surrounding the court. It’s just one part of a suite of new tech offerings that the NBA has incorporated into games to help enhance audience experience under current restrictions. 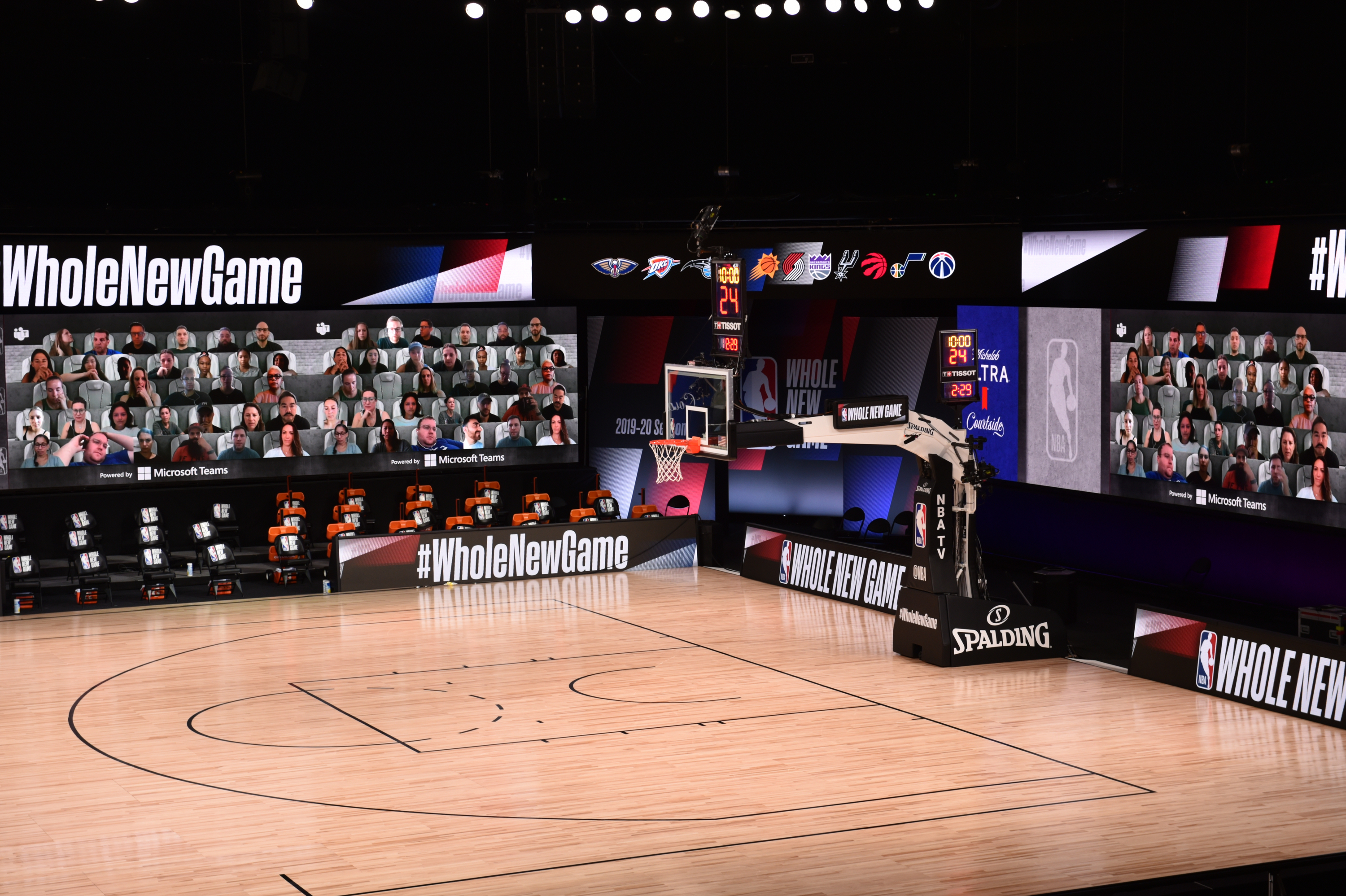 The idea came together at the hands of the NBA, Microsoft and its official beer sponsor Michelob Ultra along with the latter's agency FCB New York.

Michelob Ultra VP-Marketing Ricardo Marques presented various partners including agency FCB New York a simple brief: “How can you talk about enjoyment in a world where fans cannot cheer for their teams?”

According to FCB New York co-Chief Creative Officer Gabriel Schmitt, talk from both fans and players, including that LeBron James interview, inspired his team to think big. The agency, which proved its out-of-the-box tech thinking on award-winning ideas like Burger King’s “Whopper Detour,” landed on an idea to somehow bring fans to games virtually as if they were there, and Schmitt texted the concept to Marques. His response? “Let’s go.”

The brand and agency had researched various technologies to ensure the idea was possible, but hadn’t finalized partners to make it happen. But when they approached the NBA with the idea, the stars aligned.

Not surprisingly, NBA’s head of Next Gen telecasts Sara Zuckert and her team had already been cooking up their own way to bring fans to the court. "Back in March, when we shut down, we started to think about what games would look like without fans, and we focused on creating the best possible experience for not just fans but also our players,” she says. In April, Microsoft became the official tech partner of the NBA, a relationship aimed at enhancing and personalizing the fan experience. Among the things they were already developing was tech that dovetailed with Michelob Ultra’s concept.

Jeff Teper, corporate VP-Microsoft 365 and Teams, said COVID lockdown had inspired the company to explore how to make its virtual conference technology Teams more robust. “What if we didn’t have everybody in boxes? What if they could be in a virtual coffee bar, a virtual classroom?” he says. Brainstorms ultimately led to “Together Mode” in Teams, which unites multiple video feeds in the same “location”—seats and all—allowing people to break free from their “Brady Bunch” squares.

Even before Microsoft officially announced “Together Mode” in July, the company presented it to the NBA as one avenue to explore for fan engagement.  “People want to be in the same kinds of seats, high five each other, pat each other on the head,” Teper says. “Part of the fun of going to a sporting event is to go crazy with people you have nothing in common with.”

All that thinking converged to create “Michelob Ultra Courtside,” which manifests in the stadium as a “virtual audience,” appearing on 17-foot screens that surround the players on three sides of each the three courts in the Bubble. During broadcasts, the fans appear as they would in real life, with a few minor but arguably charming, quirks. The motions at times a bit jerky. Also, they are slightly-larger-than-real-life size— "That allows us to project on TV with enough resolution,” Teper says.

Through "Michelob Ultra Courtside," fans were able to "join" teams all throughought the NBA playoffs, and though the experience wasn't perfect it was the closest thing to an in-person experience we'd seen during the pandemic.

Read the full story on how the NBA, Microsoft, Michelob Ultra and FCB pulled off the experience here.