Stores can now sell stronger beers, leaving Minnesota as the only state operating under the Prohibition-era ‘3.2 beer’ rule

Utah is about to get a little less sober and Budweiser’s Clydesdales are galloping their approval.

Starting Friday, the state will permit beers as high as 5 percent alcohol-by-volume to be sold at stores. Previously, the cap was 4 percent ABV (or 3.2 percent alcohol-by-weight), meaning anyone looking for stronger beer (deemed “heavy beer”) had to purchase it at state-run liquor stores.

Budweiser, which at 5 percent ABV is one of several mainstream brands benefiting from the new law, has seized on it as a marketing opportunity. On Wednesday night the brew held a “funeral” for 3.2 beer in downtown Salt Lake City that included taking the brand’s iconic Clydesdales to local bars. Bud also passed out “obituaries” to bar patrons that included a tribute to the special 3.2 version of Budweiser that was sold under the old law. It included the following passage:

Despite the restrictions, Budweiser 3.2 became an integral part of society, attending local events,basketball games, celebrations and gatherings on an almost daily basis. Yet, despite becoming ingrained into society and an undoubted success, 3.2 suffered greatly under the lack of weight of expectations. 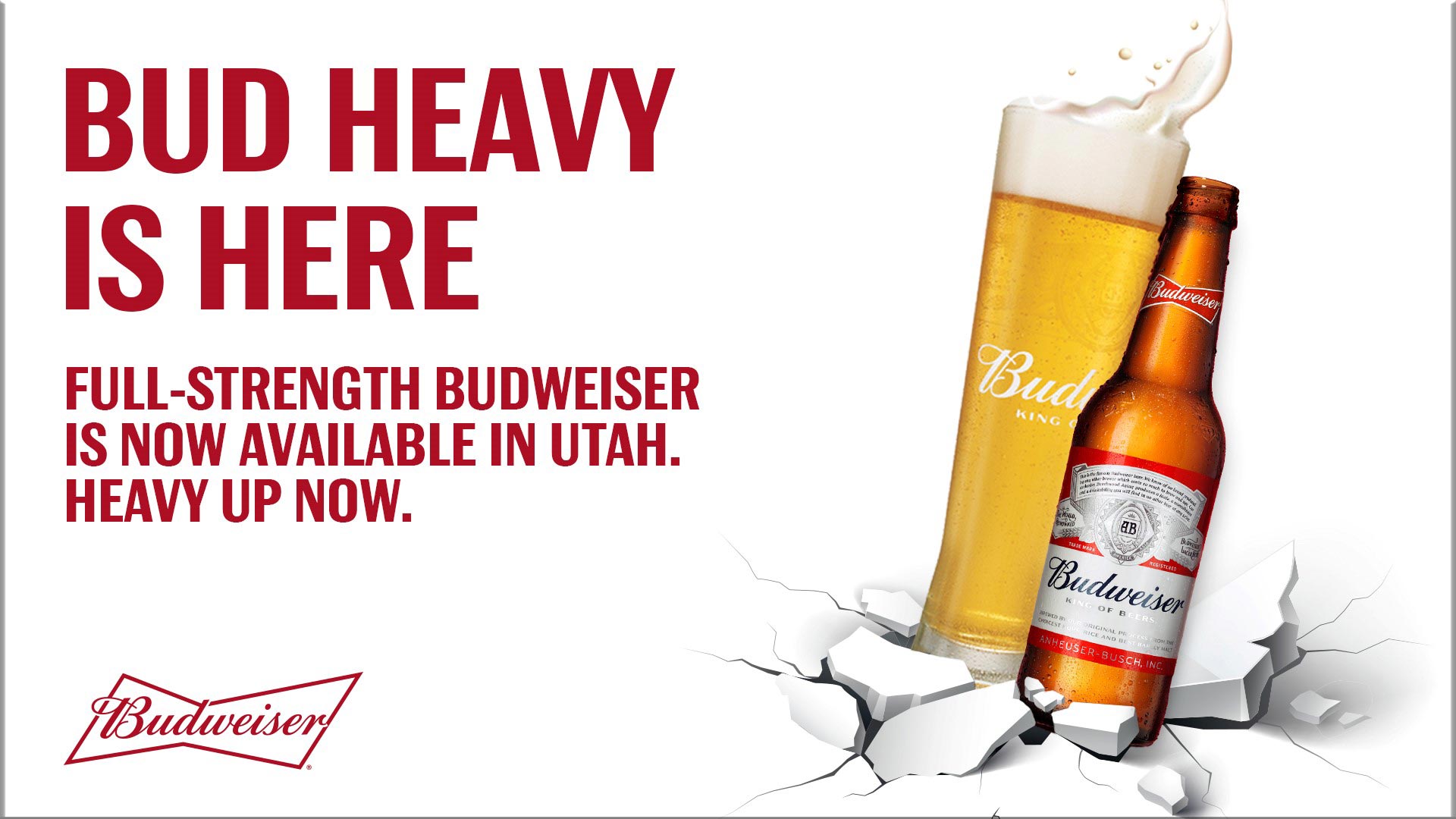 The old law had been in place for 86 years. It dates back to the Cullen-Harrison Act, which Congress passed allowing for so-called 3.2 percent beer sales during Prohibition. Even after Prohibition was repealed just a few months later, Utah and other states clung to the 3.2 percent rule. But as of Friday, Minnesota remains the only state operating under the 3.2 percent standard.

The state’s sober reputation is deeply ingrained. A Salt Lake City tourism website maintains an entire page answering the question, “Can I get a drink in Utah?” It includes descriptions of cultural oddities, like the “Zion Curtain,” a reference to an old law that was repealed in 2017 that required establishments to prepare alcoholic drinks behind partitions. “Technically, the Zion Curtain no longer exists. But many restaurants still adhere to this rule due to confusion about what has now been dubbed The Zion Moat,” the tourism site states.

Friday’s lifting of the 3.2 beer law clears the way for a range of mainstream brews to finally escape the confines of liquor stores and sell their regular recipes in stores, including Bud Light and Coors Light (4.2 percent ABV). Under the old law, restaurants and bars equipped with proper licenses could sell packaged versions of stronger beers, but only 3.2 beer could be served from taps.

Utah’s new law comes after Kansas, Colorado and Oklahoma recently lifted their 3.2 beer rules. As the number of 3.2 states dwindled, “we were a little concerned that the brewers really didn’t  want to make special packaging for us,” Terry Wood, director of communications for the Utah Department of Alcoholic Beverage Control, told Ad Age. “That would have killed the grocery and convenience store business.”

When Kansas changed its law earlier this year, Kansas City-based craft brewer Boulevard Brewing Co. cheered the fact that it no longer had to make special 3.2 varieties.  "It was just a pain in the posterior, you know, for everyone," Jeff Krum, president of Boulevard, told NPR.