Among its highlights were award-winners like 'Whopper Detour,' 'McWhopper' and a Google Home hack

Creativity looks back on the brand ideas and campaigns that made the last decade. See the full lineup here.

In the last decade, Burger King was always ready to experiment with the tech du jour or tap into cultural topics you wouldn’t likely expect a fast feeder to partake in (like anti-bullying, mental health or net neutrality).

The brand changed the game with numerous campaigns—the most notable highlights were the brand’s invitation to McDonald’s to create a co-branded McWhopper in the name of world peace (leading to numerous accolades), via Y&R New Zealand.  There was also another decorated idea in which BK and agency David hacked Google Home to extend the life of a TV spot, not to mention the multi-Grand Prix-winning “Whopper Detour” from FCB New York (above) that offered fans one-cent Whoppers—but only when they were at or near a McDonald’s.

The burger chain is pushing people to download its app (or use it, if they are among the millions who already have it) by offering a one-cent Whopper. The catch: Patrons have to place the order on the app while they're inside or nearby a McDonald's. The app will then direct them to the nearest Burger King to redeem the offer.

BK says FCB New York approached it with the premise about a year ago.

"We love ideas that when the idea gets to us we say 'how the heck are we going to pull this off?'" said Marcelo Pascoa, BK's global head of brand marketing.

Seemingly every restaurant chain has an app these days and more chains are offering mobile ordering and payment. The limited-time one-cent deal should appeal to Whopper devotees and may entice others who haven't yet used the app to do so. And while McDonald's and BK have both done $1 deals within their respective apps, offering a signature sandwich for a penny should generate some buzz.

The "Whopper Detour" campaign from FCB New York took a bit of tech savvy to pull off. In order to implement, they had to geofence nearly every McDonald's restaurant in the U.S., as the offer only unlocks within about 600 feet of a McDonald's.

"We know that McDonald's is practically everywhere," says Pascoa. Data backs him up. McDonald's has previously boasted that in the United States (and four other top markets), nearly 75 percent of the population lives within three miles of a McDonald's. There were more than 14,000 McDonald's restaurants and roughly 7,200 Burger King restaurants in the U.S in 2017, according to data from Technomic.

BK's app has had mobile order and payment nationally since August. Now BK wants to promote it "in a way that feels quintessentially Burger King," says global CMO Fernando Machado.

The work includes a print ad showing the arm of BK's King changing a McDonald's sign to read "Billions Swerved" instead of "Billions Served." 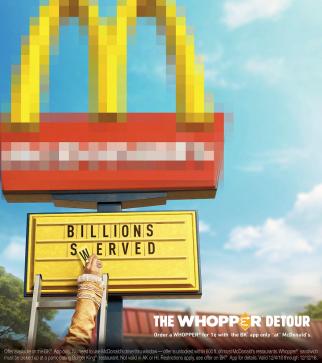 BK did a media buy with Waze that includes a banner ad that appears when one's car stops near a McDonald's.

And an online video (above) promoting the limited-time deal shows actors trying to redeem the offer at the McDonald's drive-thru, where their orders are met with confusion from McDonald's staff. "We don't have Whoppers here, this isn't Burger King," one McDonald's worker responds. Later, a guy asks if the Golden Arches could replicate a Whopper Jr. A McDonald's employee, her face blurred in the video, responds "they probably could make that. It wouldn't be as good as Burger King would, to be honest with you."

The footage was captured over two days, using hidden cameras and microphones. The team even had an actor pretend to be a TV reporter filming nearby in order to shoot drive-thru sequences from a distance without drawing too much attention. Machado and Pascoa stress that they weren't trying to insult McDonald's or its crew members.

BK has called out McDonald's in prior campaigns, including print ads featuring grills in yards of former executives and, of course, its multi-award-winning McWhopper Peace Day proposal.

The promotion is available Dec. 4 to Dec. 12 and can only be redeemed once per person. BK says its app has been downloaded to 5.9 million devices. For now, McDonald's app is the No. 4 food & beverage app in Apple's app store, while BK's is no. 11, just below Sonic Drive-In.

Burger King: You may not recognize the famous names on Burger King's new celebrity meals