Forget Apple. Get your next phone from Fisher-Price | Ad Age
Skip to main content
CREATIVITY
Sign In Register

Forget Apple. Get your next phone from Fisher-Price

Another year, another iPhone. Apple’s recent iPhone 13 launch has users evaluating whether miniscule upgrades are worth another trade-in, part of what has become the yearly life cycle of iOS devotees. Wouldn’t it be nice to save that cash and just go back to basics? Like, toddler basics. Fisher-Price is tossing its iconic Chatter Telephone into the ring, celebrating the toy’s 60th anniversary with a version that can actually make calls. 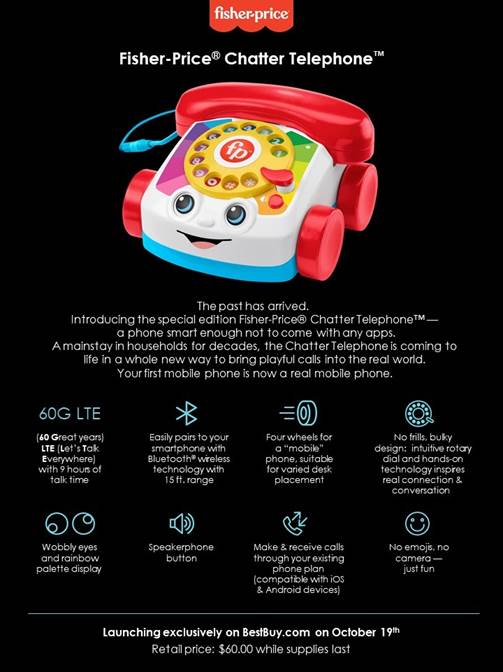 The Fisher-Price Chatter Telephone debuted in 1961. The colorful, plastic rotary phone on wheels is one of the brand’s most popular for little ones. For adults looking to feel a little nostalgia or even just to simplify their workflow, the new version looks exactly the same, but this special-edition version connects to Android or iPhone via bluetooth. Within a 15-foot range, the Chatter Telephone can make calls and even features a speakerphone button for hands-free optimization.

The accompanying ad is a clever spoof of Apple’s signature announcement spots. Glimpses of the telephone in extreme closeup, the camera gliding past its glimmering plastic, slowly reveal the entire product. Phrases, in minimalist text, announce that “the past has finally arrived” and “your first mobile phone is now a real mobile phone.” The ad ends with the tempting tagline: “Let’s be kids.”

The Chatter Telephone with Bluetooth is available for $60 at Best Buy while supplies last.