Kate Hudson gets high for the holidays in new seltzer ad

Between office parties, family gatherings and general merriment, the holidays tend to be pretty boozey. But this year, Cann, a cannabis beverage brand, offers an alternative method for getting jolly.

Cann is a THC and CBD-infused beverage (although it sells “unspiked” versions as well) looking to change the way we party. As weed legislation evolves throughout the U.S., the brand looks to carve a new niche in the party market, whether that’s exclusively getting stoned or mix-and-matching with alcohol.

In its latest campaign, Cann partnered with actress Kate Hudson on a playful holiday campaign featuring her King St. Vodka brand. In the holiday spot, Hudson is joined by TV personality and former basketballer Baron Davis as well as musician and actor Darren Criss for some stoned holiday hijinx. The vibrant and energetic video, set to Criss’s track “Christmas Dance,” was directed by Hannah Lux Davis, who has directed music videos for Ariana Grande and Doja Cat as well as ads for Pepsi-Cola, McDonald’s and Taco Bell. 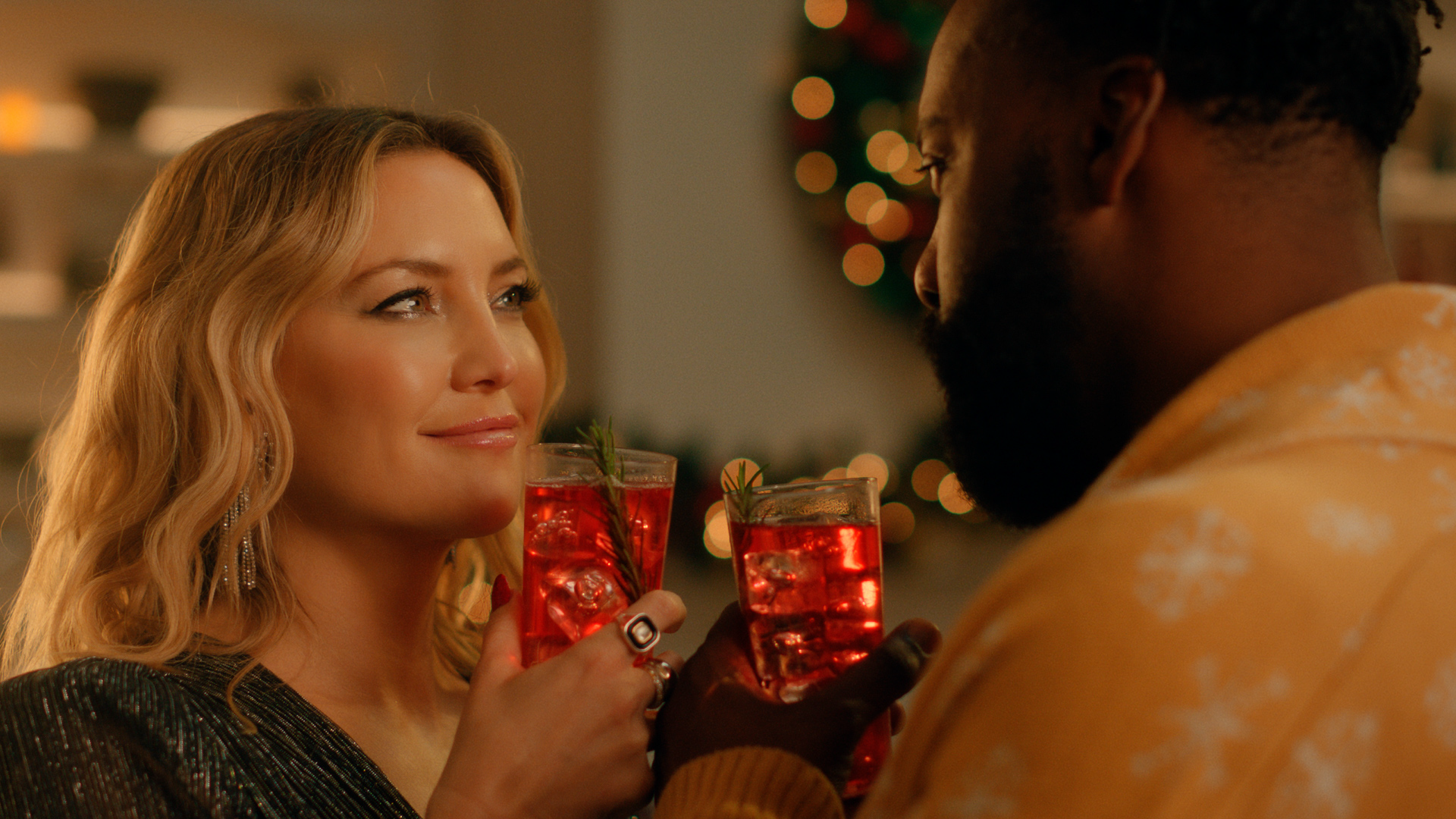 In the four-minute ad, Hudson is a bit tense from holiday party planning. Davis suggests she try some cannabis-infused Cann, but she’s way ahead of him, revealing a cart stocked with the brand’s cranberry sage flavor.

For the campaign, Hudson collaborated with Cann on a vodka cranberry recipe elevated above all the rest—it combines the actress’s vodka with the THC beverage for the ultimate celebration buzz, available on Cann’s site as an exclusive holiday bundle.

“We’re mixing booze and cannabis in one drink. Do you think we can still party this hard?” asks Davis.

As if reassuring wary viewers, Hudson responds, “We were born to party.”

The two swirl around in a montage of holiday-themed fun—cutting paper snowflakes, tossing candy into one another’s mouths and wrapping themselves like presents. Hudson strikes up a conversation with her Elf on the Shelf, who she mistakes for Darren Criss in her stoned state. 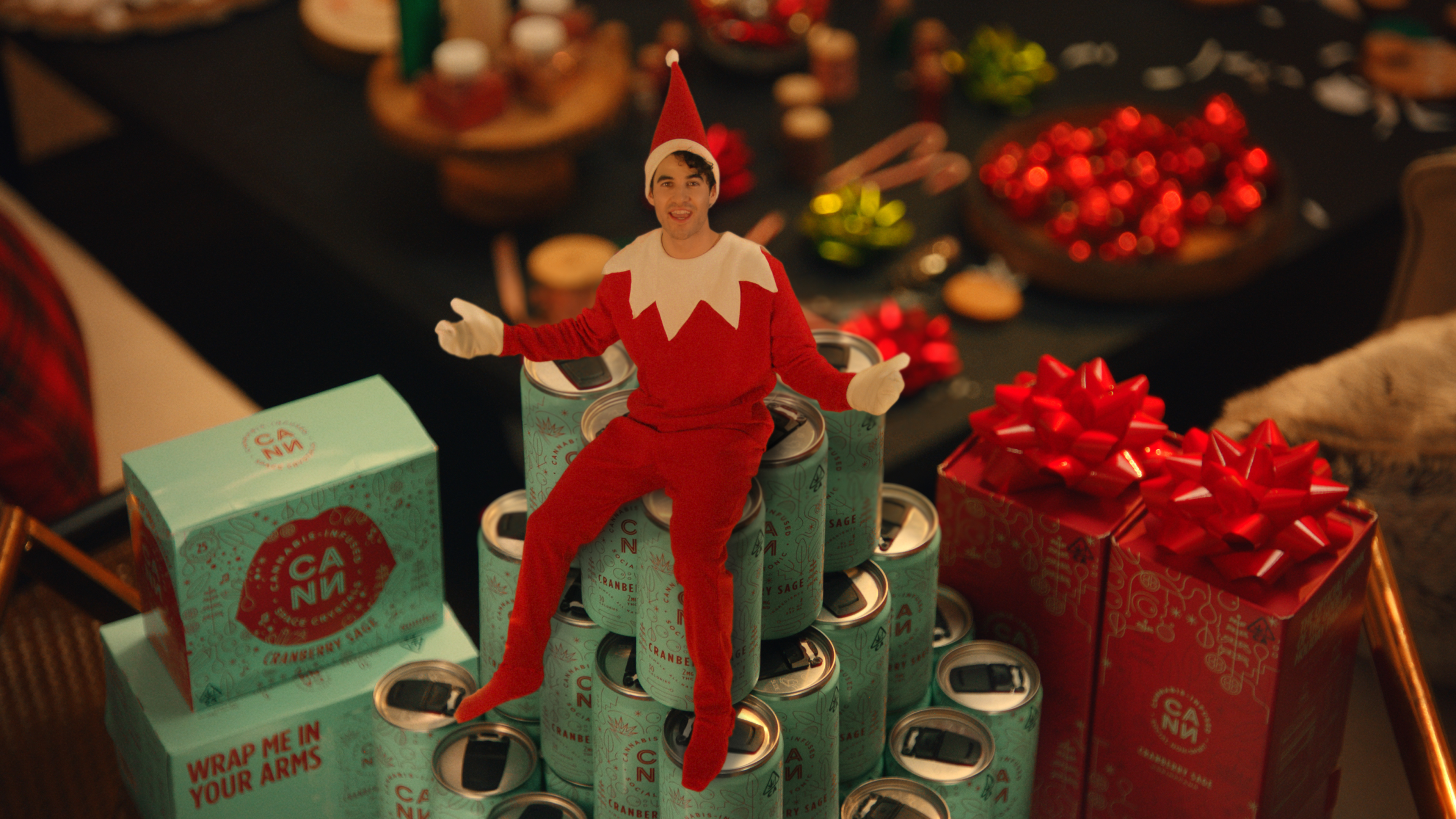 “Getting non-stoner celebrities to be public-facing about cannabis has been a goal of mine since I started Cann three years ago,” said Luke Anderson, co-founder of Cann. “Even though we're a very playfully anti-alcohol brand, many of us at Cann are still drinkers and many of our target consumers are drinkers. So, we actually like to say 'fuck it' every once in a while and say you can use this as a mixer. And Kate really identified with that ideology. Her brand is all about fun and party, but within reason. She's very classy; she's never messy. And so this idea that instead of drinking six vodka cranberries and feeling sick, you can probably have two or three spiked with a little bit of cannabis and enjoy a slightly different buzz and be more conscious about what you're drinking—she really liked.”

Anderson said that he hopes the campaign will also inspire more understanding across the nation about the benefits and potential of cannabis, especially in areas that aren’t as enthusiastic about legalization.

“Hopefully [the campaign] helps push taxpayers and voters in middle America—who view Kate Hudson as America's sweetheart—toward this idea that legalization is a great idea. And I think it takes seeing someone that you really respect and admire do something and consume something that you previously thought was taboo to change your thinking.”

The ad was created in partnership with Side Street, an arm of creative agency London Alley. It will air on Cann’s owned social channels as well as those of the campaign’s talent. Anderson reports that Cann has established partnerships with alcohol distributors in addition to cannabis dispensaries to broaden access to its product and generated $3 million in sales last year. He expects to triple that by the end of 2021.