Newspapers are hardly the place you’d expect to see a Super Bowl campaign. But Molson Coors is using the old-school medium in its latest effort to tweak Anheuser-Busch InBev, which holds exclusive alcohol TV ad rights for the Feb. 7 game on CBS.

Miller Lite today ran full-page ads in the New York Times, Milwaukee Journal-Sentinel and St. Louis Post-Dispatch plugging a ridiculously long URL. Here’s the catch: The brew says that anyone typing the 836-character address will burn one calorie, which is exactly the difference in calories between Miller Lite (96) and AB InBev’s Michelob Ultra (95). (Molson Coors has significant operations in Milwaukee, while Anheuser-Busch was founded in St. Louis.) 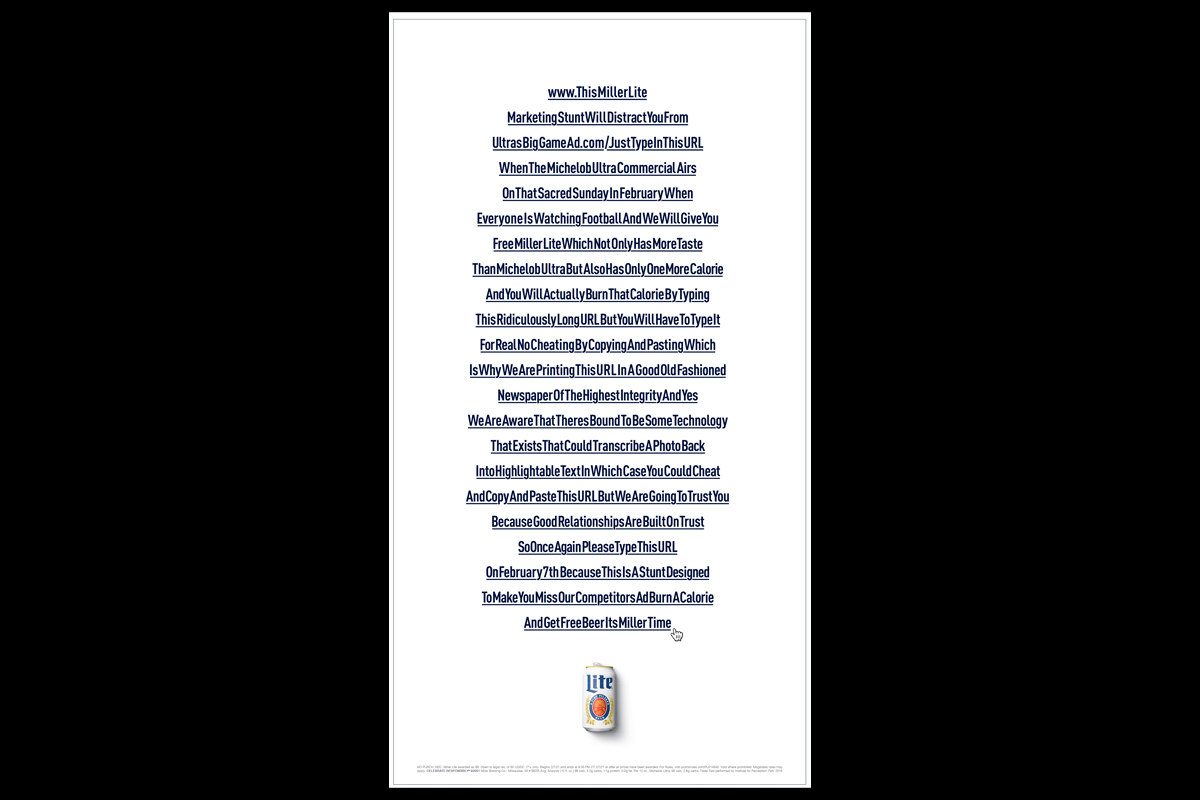 “For decades, Miller Lite has been known as the original great tasting and less filling beer,” Sofia Colucci, VP of Marketing for the Miller family of bands, said in a statement touting the ads. “Through the years there have been many imitators, Michelob Ultra being one of them. And while yes, they may have one less calorie, we know that everyone finds joy in something that tastes great.”

The campaign comes from DDB. While Lite will also run ads on social media, the brand says it will make the URL “near-impossible to copy and paste” because it is “adamant that consumers type in the URL to burn that single calorie difference.”

Miller Lite debuted in 1975 as the first successful mainstream light beer. But Michelob Ultra ushered in the “low-cal” beer era in 2002 and has successfully fended off beers marketed as low-cal—including Molson Coors’ Miller64 brand (64 calories). Michelob Ultra is enjoying a multiyear growth spurt and is now the fourth largest U.S. beer—and is nipping at Miller Lite’s heels for third place, according to data from Beer Marketer’s Insights that shows Lite finishing 2020 at 5.8% market share and Ultra at 5.6%.

AB InBev will run two Super Bowl ads for Ultra, including one sports-themed ad that was already released and includes Serena Williams, and another spot that will plug its new organic seltzer variety.

Lite’s URL ad campaign follows a separate move by Molson Coors’ Coors brand to taunt its larger competitor’s big-spending Super Bowl ways. In a campaign released last week, Coors uses “targeted dream incubation” in an attempt to induce people into dreaming about imagery associated with the Coors brand, like mountain streams, snow and refreshment. The campaign, also from DDB, is called “The Big Game Commercial of Your Dreams.”