Former NFL player and San Francisco 49ers quarterback Colin Kaepernick made an indelible mark on popular culture and advertising with his social justice efforts that led to one of the most memorable campaigns in marketing history. Now, Netflix and Oscar-nominated director Ava Duvernay (“Selma,” “13th,” “When They See Us”) will tell the story of Kaepernick’s formative years in a new limited-run series, “Colin in Black and White.”

Set to debut on October 29, the series, which Kaepernick created with Duvernay, stars Jaden Michael as the young athlete. Netflix tapped agency Kin to create the show's first teaser, "The Path Is Power." In a seamless stream of scenes, it travels from his time as a kid on the basketball court to his beginnings as a star in football, the sport that would ultimately become the backdrop of his famous “Black Lives Matter” protests that saw him kneeling during the national anthem at NFL games.

Kaepernick narrates both the series and the ad. Along with different settings, hairstyles and outfit changes, the spot shows him persevering in the face of societal pressures, disappointments, microaggressions and more on his path to finding his voice and charting his own course.

“One day we realize the game we’re playing is someone else’s,” he says in the voiceover. “In this game, we can’t speak our truth. In this game, it feels like the only choice we have is theirs. But we can change the game. We can write new rules, radiate our joy, take back our power and find our purpose. That’s our path. Believe in your path, and by doing that we can become who we’re destined to be.”

“The series shines a light on how microaggressions affect children at the earliest age, in their formative years and can condition them,” said Kin co-founder Kwame Taylor-Hayford of the promo. “As we see with Colin, it takes a lot of courage and fortitude to stay oneself and follow one’s path. It's a story about perseverance, bravery and authenticity that we can all relate to.”

In terms of tone, Taylor-Hayford added that “it felt particularly important to craft such a hopeful and triumphant message at this time. 2020 was the year the curtain was finally pulled back on the true threats of racism. It was the year of pain and struggle, but Colin’s journey shows that through small, incremental steps any ordinary kid can believe in themselves, find their confidence, and use their voice to make a difference.” 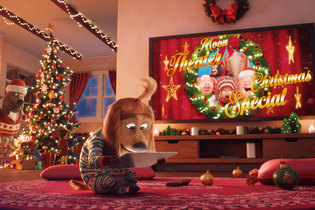 Netflix: Netflix giving away props from its most popular shows

Netflix: Ryan Reynolds digs at The Rock in ad for Aviation Gin and 'Red Notice'