Pentagram was behind work bringing more consistency to company's branding

“What happened to my Slack?!” If you’re like a lot of the 9 to 5 world today, when you turned on your computer or checked your phone this morning, you might have been shocked to see that your Slack universe had dramatically changed. Gone is the multi-colored tartan hashtag logo--or octothorpe, as it’s officially called --and now, in its place, a curvier, more delicate symbol composed of colorful teardrop and oval shapes.

Late yesterday, the brand announced its new logo courtesy of design firm Pentagram. On its blog, it acknowledged that “we loved our old logo, and look, and know many felt the same,” but also admitted the old logo was “extremely easy to get wrong,” showcasing how "extremely awful" and inconsistent it looked against different colors as well as the scrambled egg that was its branding across a variety of audiences.

“As a user of Slack, a fan of Slack and of their distinctive tone of voice, at first, I myself was, 'Why do you want to change anything?'” says Pentagram partner Michael Bierut, who oversaw the redesign. Turns out, “they had never really created the logo with a great sense of purpose from the beginning. They had put together a fairly alarming dossier of material for internal and external, internal marketing, specialized marketing to a different audience, and general advertising to build awareness and it was really really inconsistent overall.” 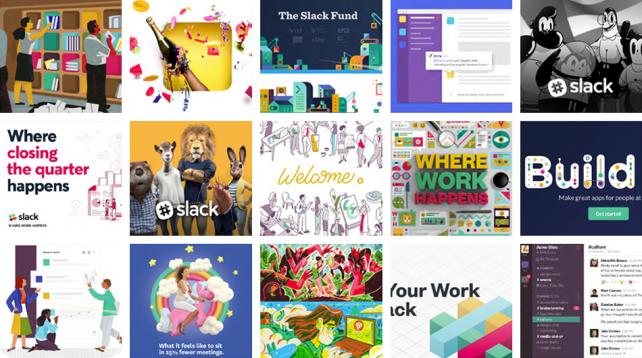 Pentagram retooled the octothorpe into a symbol comprising “speech bubbles” (the teardrops) and “lozenges” (the ovals), that could scale up or down, with elements that could be extracted and used in customized icons. The aim was to create a symbol that could scale and work consistently across different contexts.

The new design arrives just as the company prepares to go public with a direct listing.

“They had a meteoric rise in their relatively short existence and barely had time to catch their breath, but then realized that with growth, that meant doubling down on current practice, or taking a pause and resetting to do something more thoughtful and coherent” with their branding, Bierut says.

As with any major logo change--the reactions came fast and furiously (and no doubt, within the Slack platform itself). On our team’s Slack alone we saw comparisons to very non-Slackish brands like the Bahamas, an old Kraft logo and one for Stop & Shop, while Boing Boing’s headline to a reaction piece was “Slack’s new logo Is a penis swastika.”

Bierut, however, isn’t fazed--and he warned the company such a fallout would occur. “I said this over and over again--this is going to flip people out because this is the ultimate case where people are truly habituated to all the visual elements,” he says.

“The biggest challenge they’ve got is the tremendous enthusiasm people have for them,” he says. “All those passionate fans will suffer a potentially traumatic moment of disorientation, but their enthusiasm really isn’t about the logo--it’s about Slack itself.” (Let’s take a moment now for the guy who dressed up as the old Slack mark.)

“The promise is never a guarantee, but what we really wanted to do was to create something that could become the recipient of all that good will,” Bierut says. “Because it’s a thing people use every day, even people who hate the [new logo] will use it with teeth gritted, and eventually the pleasure they take from the product will at the very least sufficiently inure them to the symbol or at best, make them think fondly of it.”