This healthcare campaign calls out 'medical gaslighting' against women

Tia, the female-focused healthcare brand, calls out "medical gaslighting" against women, in a new campaign that imagines women being unfairly treated as they sometimes are by healthcare professionals, but in retail or service situations.

Introducing a new tagline, "Healthcare that hears you," the company is airing an online film featuring a series of vignettes illustrating the problems women can experience at the doctor's office. In one, a woman orders a coffee, but is handed a smoothie instead and is told to "come back in two weeks if nothing changes." Another woman, buying a bike, is given a men's bicycle with a few rudimentary adjustments, "so now it's for a woman." In a phone repair shop, another character is told "maybe it's all in your head," only to be charged $150 anyway. "Traditional healthcare has been dismissing us like this for too f**ing long," states the narrator.

The campaign, running across platforms including Facebook, TikTok and Instagram, is the first work for Tia from Big Spaceship, which was appointed in March. The healthcare provider launched in 2017 and offers physical, mental, and reproductive care via clinics in New York, California and Arizona. The new marketing push comes as it plans to expand its operations in New York and California, with clinics in Soho, Williamsburg and Santa Monica opening by the end of the year.

According to the agency, the inspiration and dark humor behind the videos comes from the stories of real Tia members who have had their concerns dismissed by "traditional" healthcare providers. The campaign is also running on radio, display and in the New York market across out-of-home, with billboards that feature real Tia patients and their stories. 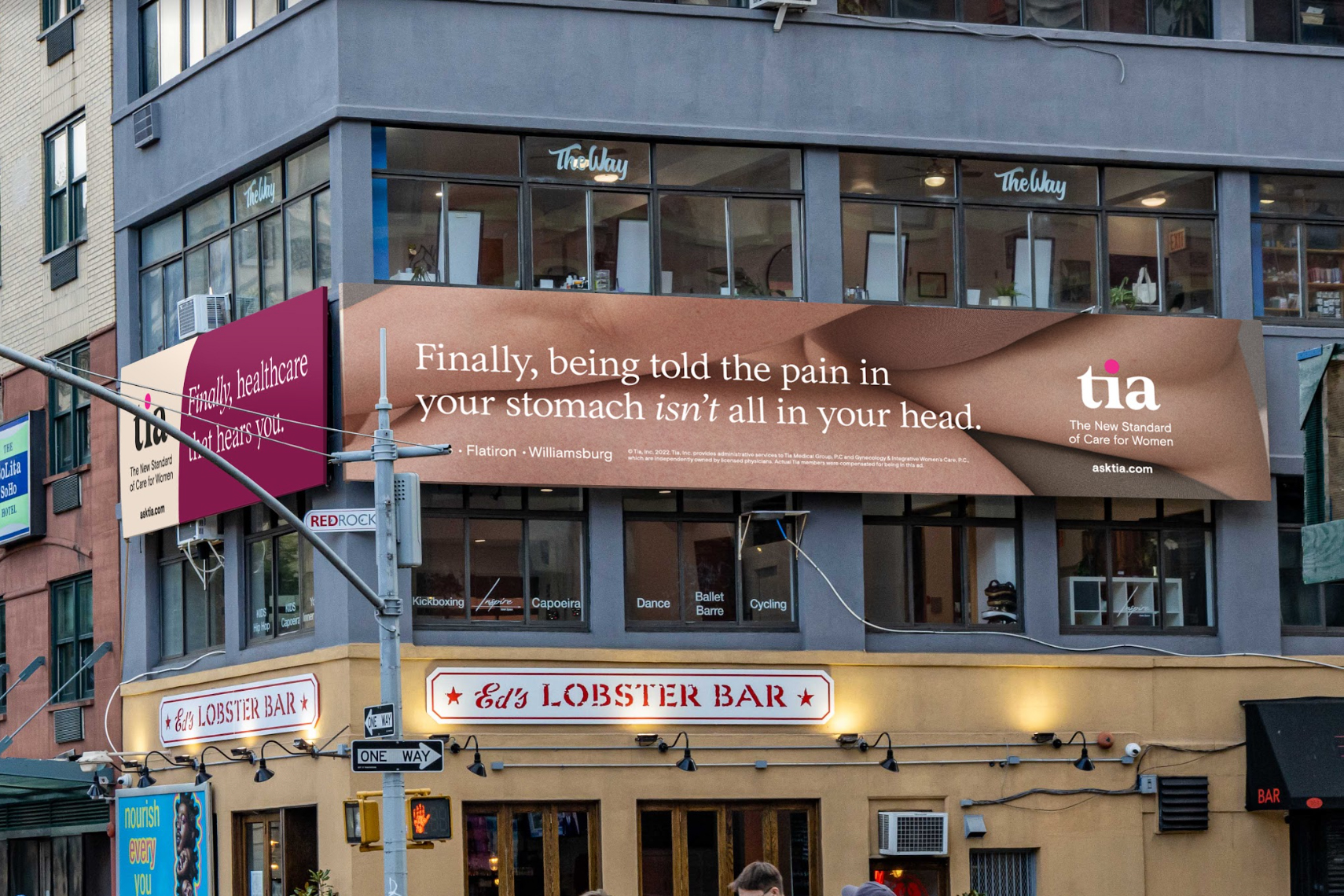 The out-of-home placements are running across Manhattan and Brooklyn in neighborhoods where new Tia clinics are opening later this month as well as in digital advertising, Tia’s homepage, and social media channels.

“It shouldn’t be revolutionary to listen to women,” said Carolyn Witte, CEO and co-founder of Tia, in a statement. “Yet again and again, we hear stories from our members about being ignored, dismissed and demeaned by traditional healthcare. At Tia, we think listening to women should be part of a new standard of care for all women. With this campaign, we’re hoping to showcase both how common medical gaslighting really is and call on the entire industry, and particularly physicians, to commit to listening to and believing women. In a post-Roe America, where women’s healthcare is under attack like never before, this simple commitment is more important than ever.”

"Today, women are still fighting for the right to choose what’s best for their bodies and health," added Kristen Kriisa, creative director at Big Spaceship. "Despite years of medical advancements, traditional healthcare continues to leave all women feeling dismissed, patronized, and misdiagnosed. Through this campaign, we show that women don’t have to just accept the status quo. At Tia, women aren’t just seen by doctors; they are heard too.”