U.K. beer brand Boddingtons was huge in the '90s, partly thanks to a successful ad campaign by BBH starring model and actress Melanie Sykes that ran from 1996-99. Now, it's teamed up with Sykes again, as well as director Daniel Kleinman, to make a new addition to the campaign.

The original "Cream of Manchester" ads usually began with an epic style that was then punctured by a glamorous Sykes making a down-to-earth remark in her Manchester accent. For example, in one, an athlete runs through a desert to an ice-cream van, where she asks if he'd like a flake in his pint of Boddingtons. Another ad spoofed a sun-cream campaign, with Sykes drinking a pint of beer on the beach in a swimsuit.

The new spot, by Mcgarrybowen London, updates the style for 2017, seemingly referencing the current popularity of cycling among middle-aged British men. It features what at first seems to be a Tour de France-type professional cyclist seemingly preparing for a race, zipping up his jersey and checking equipment in the style of a serious sports ad. "Take the punishment, take the pain," says the voiceover.

However, all is not what it seems; we see him dripping with sweat and flashing some fleshy butt-cheek as the voicover segues to spouting nonsense like "Take the Diem and Carpe it." Finally we zoom out to see the portly biker puffing up a hill pulling a rickshaw containing Sykes, who remarks: "'Ere Bradders, giddy up lad." It ends with her drinking a pint and announcing, "By 'eck, it's still gorgeous."

Sales of Boddingtons have been in decline since it was acquired by AB InBev in 2000, and despite the tagline, "The Cream of Manchester," it is no longer brewed in the city but in Wales. It parted company with BBH in 2007, and has advertised little over the last 10 years. 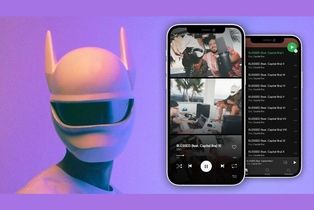