The insurance category seems largely dominated by laughs, with brands like Geico, Liberty Mutual, Allstate and Farmers plugging their offerings with various flavors of funny. But New York-headquartered Travelers continues to carve out an emotional path in a new brand campaign from TBWA/Chiat/Day New York.

The “Stories of Care” effort consists of four time-spanning spots illustrating how the company has helped to nurture and protect families’ livelihoods and dreams—even after they encounter massive setbacks.

One ad follows a young girl sitting in her family’s coffee shop honing her artistic skills as she draws pictures of the scene and customers—despite her parents’ disapproval of her passion. Years later, the shop is destroyed in a fire. Magically, the girl’s sketches survive and ultimately find a place of pride on the walls of the rebuilt shop, serving as a precious historical record of the family’s hard work.

Three more spots depict similar stories of people’s loss followed by triumph, thanks to the coverage they received from Travelers: we see a girl and her mom’s relationship develop during their car rides, and following an accident, the tradition continues when the girl becomes a mother herself; a father builds a family heirloom that later survives a flood in the family home; another dad is able to hand over to his daughter the keys to his hardware business, newly renovated after it was damaged during a massive storm.

The spots were directed by Park Pictures’ Lance Acord (Nike’s “Dream Crazy”) and cut by Oscar-winning editor Kirk Baxter (“The Social Network,” “The Girl With a Dragon Tattoo”).

The new campaign is the company’s first brand push since 2015 and evolves the emotional storytelling it’s delivered with TBWA/Chiat/Day New York, which became its creative AOR that year.

The effort helps to solidify Travelers’ platform as a “company who cares,” says Travelers VP-Advertising and Media John Morris. “We wanted to show that when our customers need us most, we’re going to be there to help protect them so they can continue to grow.”

With the emotional storytelling, “we have a slightly different strategy than our competitors,” Morris adds. “You won’t find us spending at the level of some of them. The key thing for us is differentiation, trying to demonstrate what makes Travelers unique, which is our culture, our people and our commitment to caring for our customers.”

Such is also evident in the brand’s recent safety push from TBWA/Chiat/Day, “Unfinished Stories,” which explored, through animated short films, where lives of real individuals could have gone had they not been killed in distracted driving accidents.

The new campaign debuted during the Travelers Championship PGA Golf Tournament last week and will continue to air during other golf programming. 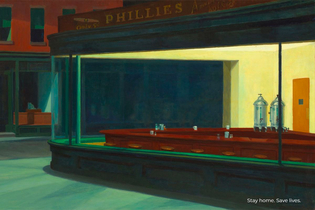 These famous logos have been remade for the coronavirus age