The Season 2 finale of HBO's existential tech-western "Westworld" airs this weekend, but Season 3 probably won't drop until 2020, so fans may be forgiven if they're already beginning to experience withdrawal symptoms. But diehard devotees who can't get enough of the carefully crafted worldbuilding and the layered mysteries now have another way to immerse themselves in the show.

HBO and 360i released a new "Westworld" skill for Amazon's voice-activated Alexa assistant today. A 30-second trailer by 360i introduces the concept. Anyone with an Echo or other Alexa-enabled device can play an interactive game set in the universe of the series by asking her to "Open Westworld."

Thus begins a listener-directed storyline determined by the choices a player makes in response to options presented by the game. Players are placed in the role of a host, an artificial being seeking information and self-awareness. The game begins in the Saloon, with a short tutorial for new users. Characters that players encounter relay clues that need to be remembered or offer multiple paths. The bartender in the initial scene, for example, can pour a drink of the player's choice or direct them to another location from the show, like Python Pass or eventually, the Delos Lab.

The game is far from straightforward. Much like old-school "Choose Your Own Adventure" books, there are plenty of ways to die (and force a restart of the game) if a player makes the wrong choice. A successful game will take around 20 minutes, but there are upwards of 60 different paths the story can take, so replayability is high.

Since there are no visuals, audio quality was imperative. High-end sound effects accompany each scene, unfolding like a radio play. "Westworld" actors Jeffrey Wright and Angela Sarafyan also lend their voices, reprising their roles from the series. 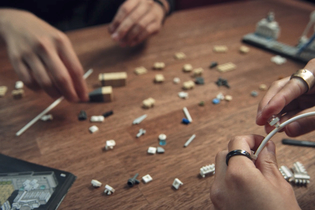 Lego invites stressed-out adult builders to unwind after the workday