Wingstop wants to turn its fans into wearable billboards and it’s ponying up some cash for the unique media buy.

Wingstop has pulled its national out-of-home ads in the first half of 2020. Instead, it plans to send Wingstop-branded hoodies to fans. When the recipients post images on Instagram wearing the sweatshirts in public, they’ll get $10 through Venmo. The chicken wing chain says that especially creative posts and ones that go viral may lead to bonus prizes including $100 gift cards. The wearable billboards effort, which comes from Publicis Groupe’s Leo Burnett and MSLGroup, will begin with about 1,000 sweatshirts.

The idea came about as Wingstop noticed its fans reaching out on Twitter asking for the brand to sponsor them. “These fans of ours are really walking, talking billboards of our brand,” says Chief Marketing Officer Christina Clarke.

Now, some will get official merch to become billboards as Wingstop looks for unique ways to connect with its fans and to make people more aware of the brand, delivery and its boneless wings.

There are three sweatshirt designs. One states “this is an ad for Wingstop” and shows a bag from the chain. The second promotes Wingstop delivery, with text and an image of the bag and a mobile phone. The third highlight’s the chains boneless wings. The Wingstop logo is featured on the back of the shirt, effectively turning its wearer into a two-sided billboard. Photo-edit-software markings, the type typically only seen by designers, were included in the imagery and make the shirts resemble ads that are works in progress. 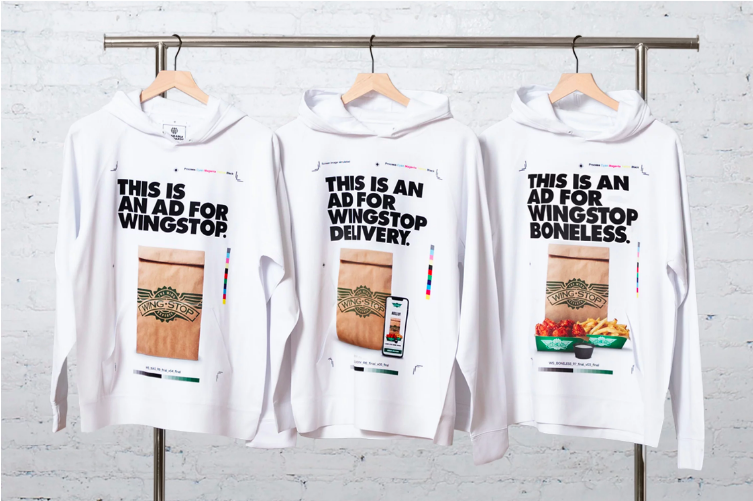 Some people apparently really, really crave Wingstop. On Friday, Barstool Sports posted a video on Instagram of a woman screaming about the chain.

SOMEBODY GET THIS GIRL SOME WINGSTOP @chicks (via @amandaaa.chiarelliii / @angela.lomo)

Wingstop plans to send her one of the hoodies and a $100 gift card.

Wingstop moved its undisclosed national out-of-home budget for the first half of the year over to this project. Costs include the merchandise itself, the $10 Venmo payments and bonus prizes such as gift cards and tickets to events.

Fans are being asked to post images on Instagram, tagging Wingstop and including #ThisIsAnAdForWingstop in the caption.

Clarke has already seen interest in the shirts. When she stopped by a Wingstop to hand one off to someone days before the launch, patrons came over and asked about it. And she says that even though her kids know they can’t get paid to wear the shirts, they want them.

Wingstop: Whoa! This Totally Trippy 10-Minute Wingstop Ad Will Make You Wish It Was Still 4/20