READ THIS NEXT
What TV commercials cost in the 2021-22 season
For back-to-school, Target will sell long twin sheets with media pockets to let students store iPads or phones after watching video from bed.
Credit: Courtesy Target

The college dorm room of today hasn't changed a lot from previous decades -- there are still the extra-long twin beds, the too-small closets, the questionable wall art and, of course, the hidden fake IDs. Yet one thing is conspicuously absent -- the TV set. A dozen years ago, kids were carting small or medium-size TVs into their new educational oases. Not this generation.

"If you walk into a dorm room today, it will tell you everything you need to know about the future of TV and media consumption," said Matt Britton, founder of millennial-focused agency MRY. Young adults just out of the nest are eschewing TV sets to watch shows on tablets or laptops, where they'll multitask with schoolwork. "They'll never watch a show at 9 p.m. on Thursday night -- it just doesn't fit into their lifestyle," Mr. Britton said.

Indeed, Forrester data show that U.S. students ages 18 to 22 spend two hours a day streaming video; 12% of students are using their phones to stream. Many use parents' passwords for services such as HBO. And less than 20% of their TV watching is live, estimates Jeffrey Cole, director of the University of Southern California's Annenberg Center for the Digital Future.

Retailers are scrambling to catch up. Some are marketing the duality of products that are both electronic and educational devices, others are banking on back-to-school products that make streaming easier for the newly college-bound. 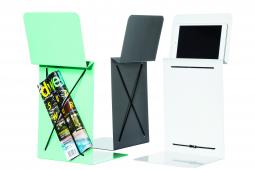 Other products Target is selling to appeal to the college crowd.

This back-to-college season, Target will feature products such as extra-long twin sheets with media pockets to let students easily store iPads or phones after watching video from bed. The Minneapolis-based retailer is also selling a bedside stand designed to prop up a tablet and a laptop tray for viewing to replace the TV stands of yesterday.

"Our guests are looking for products that play into that dual purpose -- that have the ability to be stylish but also be functional," said a Target spokesman. "They're looking for something that does a lot of different things."

U.S. sales of TV sets during the back-to-school period between June and September have fallen 9% to $4.1 billion in the last three years alone, according to market research firm NPD Group. Large-screen TVs comprise much of the ongoing sales, noted Stephen Baker, VP-industry analysis at NPD.

"Sales of smaller-size TVs are declining because people aren't replacing the ones they have with televisions, they're replacing them with mobile devices," Mr. Baker said.

Of course, a few TVs do remain in circulation at college -- but they're not being used to connect to cable in the traditional way. Many students use Microsoft-owned Xbox or other gaming devices to stream shows via their individual platforms.

And more digital entertainment players are entering the already-crowded market. This spring, Fullscreen, the popular multichannel YouTube network owned by AT&T and the Chernin Group, is introducing an ad-free streaming service, competing with established platforms like Netflix, YouTube, Hulu and Amazon.

College students' "lack of TV sets is not a lack of interest in television," said Mr. Cole. "They are more interested in television than any generation we have seen, they are just not watching on sets."

Meanwhile, electronics retailers are struggling to entice younger shoppers into brick-and-mortar stores for any TV-watching devices. As many small-ticket items, like CDs, DVDs and video games, which used to drive repeat store visits, lose relevance with consumers in favor of more popular digital mediums, stores are forced to engage in price wars online with Amazon.

"The high-frequency purchases are gone," said Mr. Britton. "Now it's just a hardware purchase, and who wants to lug it home from the store?" he said, noting that store visits are increasingly for "showrooming" -- to pick out a product and then buy online for a better deal.

Best Buy, which this month expanded a same-day delivery service to better compete with Amazon, declined to comment for this story.

Last month, GameStop reported that it had cut its video game retail fleet by 125 outposts as buying shifted online. The 1,036-unit retailer said a focus for growth is mobile devices, including smartphones. To reach millennials, GameStop, which has found that more than 60% of customers with PlayStation 4 and Xbox One systems use the devices to stream, has been honing its six-year-old loyalty program, PowerUp Rewards. The Grapevine, Texas-based company is also shifting some advertising dollars to YouTube and Twitch.

"Advertising on these platforms lets us reach tech-savvy millennials and gamers in a context that's relevant for our gaming message," said Eric Oria, senior director of marketing strategy.